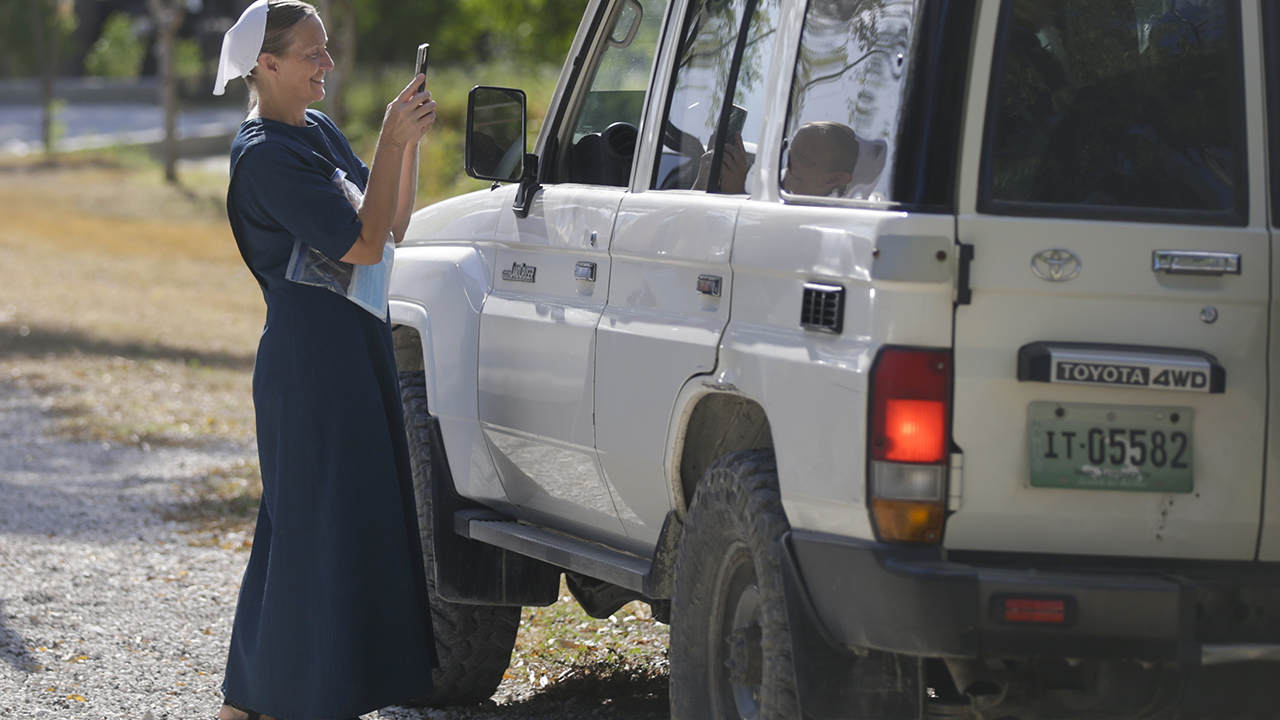 A woman takes a photo of members of the Christian Aid Ministries group departing to the airport from the group’s headquarters at Titanyen, north of Port-au-Prince, Haiti, on Dec. 16, 2021. — Odelyn Joseph/AP

The 12 Christian Aid Ministries staff and family members held hostage in Haiti for two months gained their freedom Dec. 16 in a daring and peaceful escape, a CAM spokesman said Dec. 20.

Unseen by guards, the group walked out during the night of Dec. 15-16. “It felt like God prepared a path before them,” CAM spokesman Weston Showalter said in a press conference livestreamed from CAM’s Berlin, Ohio, headquarters.

“They found a way to open the door that was closed and blocked, filed silently to the path they had chosen to follow, and quickly left the place they were held, despite the fact that numerous guards were close by,” according to a CAM statement.

The statement described the escape:

“Over the time of their captivity, God gave various hostages a desire to attempt an escape, but it took them a while to all agree on when or how this should take place. They sought God in prayer over and over again, seeking direction from Him.

“It took time and God’s work, but after much discussion and prayer, they became solidly united and decided God was leading them this way. The hostages shared that this eventual sense of unity was in itself a great miracle. On several occasions, they planned to escape, but they had decided if specific things didn’t happen, they would accept that as God’s direction to wait. This happened once or twice, assuring them it was not God’s timing.

“They continued to earnestly seek God in prayer. After discussing their plans, the group felt united that they should escape on the night of Wednesday, December 15. They placed their situation in God’s hands, depending on Him for protection and guidance. During the night, as God directed, they sensed the time was right. They prepared, put on their shoes, and packed water in their clothes for the journey. They found a way to open the door that was closed and blocked, filed silently to the path they had chosen to follow, and quickly left the place they were held, despite the fact that numerous guards were close by. In the distance they could see a mountain feature that they recognized. They knew this was the direction to go. They also followed the sure guidance of the stars as they journeyed through the night.

“This group included a married couple, a ten-month-old baby, a three-year-old child, a fourteen-year-old girl, a fifteen-year-old boy, four single men, and two single women. With God’s help, protection, and leading, they quickly made their way through the night. They walked for possibly as much as ten miles, traveling through woods and thickets, working through thorns and briars. The moon provided light for their path. During times they weren’t sure which way to go, they stopped and prayed, asking God to show them. After a number of hours of walking, day began to dawn and they eventually found someone who helped them call for help. They finally were free, thanks be to God!

“Prior to this final deliverance, we praise God for how He made a way for the other hostages to be released. All of these steps were obviously leading up to the end of this two-month journey of difficulty. No doubt your prayers to Almighty God played a part in all the hostages now being reunited with their loved ones. The hostages desire that God be glorified for the way He cared for them during their time in captivity and arranged for their deliverance.”

Showalter said the group believed God arranged for their deliverance.

“Freedom is not a place,” he said. “Our staff members who were held hostage would confirm that. Despite the difficulties, they experienced freedom even as they were being held. In our minds, and in theirs, the true hostages are the hostage takers. . . .

He clarified that, contrary to some reports, a Haitian driver was not abducted with the 17 North Americans originally kidnapped.

Showalter described their time in captivity, which included daily times of worship, prayer and singing.

“Their faith in the Lord Jesus helped carry them through dark and difficult days,” he said.

One member spent Thanksgiving Day writing a letter to his family, not knowing if he would ever see them again.

They were generally well cared for, though it was sometimes difficult to get enough clean water.

The captors, from the 400 Mawozo gang, held other hostages not from CAM in different rooms. The CAM personnel were able to talk to them through the walls and “encourage them with God’s Word,” Showalter said.