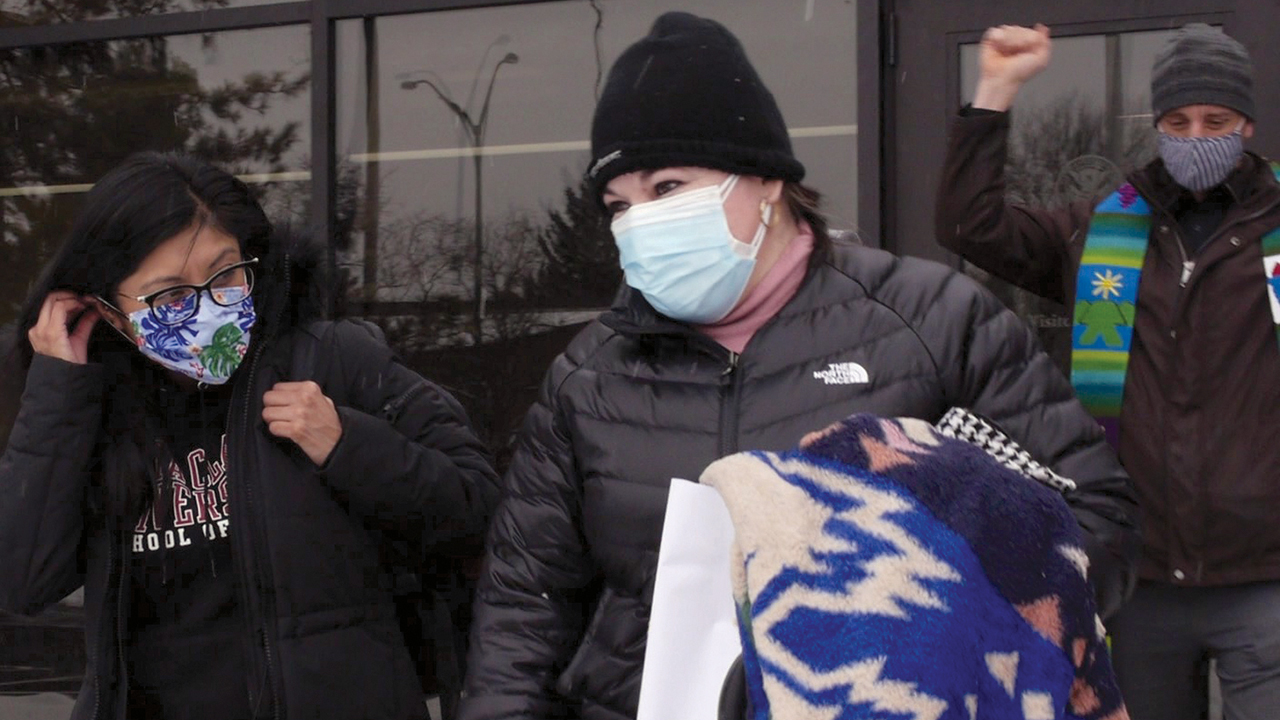 Edith Espinal, center, departs the Immigration and Customs Enforcement office in Columbus, Ohio, after leaving her sanctuary status the morning of Feb. 18 at Columbus Mennonite Church. She was accompanied by her attorney Lizbeth Mateo, left, Pastor Joel Miller, right, along with other members of the church. — Elisa Leahy

An undocumented immigrant who had been living in Columbus Mennonite Church for more than three years went home to her family Feb. 18 after securing assurances she will no longer be an immediate target for deportation.

Edith Espinal, a Mexican native and mother of three, had been living at the Ohio church since Oct. 2, 2017. She and six allies walked into a local Immigration and Customs Enforcement office, where she was granted an “order of supervision.” Under the Feb. 18 order, she cannot be deported but must check in regularly with immigration officials.

Espinal, 43, is one of more than three dozen undocumented people who took refuge in houses of worship to ride out the Trump administration’s immigration crackdown.

Her last day in sanctuary came as President Joe Biden formally introduced his immigration overhaul to Congress. The plan offers an eight-year path to citizenship for most of the 11 million undocumented immigrants living in the U.S.

Also on Feb. 18, acting ICE director Tae Johnson issued interim guidance that restrains the department from arresting and deporting undocumented immigrants who do not pose a threat to public safety.

In Durham, N.C., Jose Chicas, 55, a native of El Salvador who had been living in a church-owned house, left on Jan. 22. He was supported by Chapel Hill Mennonite Fellowship, which gave sanctuary to Rosa del Carmen until a federal court overturned her deportation order last summer.

In Philadelphia, Carmela Apolonio and her four children are evaluating their options while in sanctuary at Germantown Mennonite Church.

In Kalamazoo, Mich., Saheeda Nadeem, 65, an undocumented immigrant from Pakistan who had taken sanctuary at a church, left in early February.

“Faith communities around the country are rejoicing today because Edith will have her freedom,” Andersen said. “She has been a fearless leader and a strong prophetic voice in the sanctuary movement.”

Espinal had applied for a stay of removal as soon as Biden was inaugurated but was given the order of supervision instead, said Columbus Mennonite Pastor Joel Miller. He accompanied Espinal to the ICE office.

The order of supervision will allow her to live at home, travel freely and get a work permit, but it does not permanently resolve her deportation case. Espinal has lived in Columbus for more than 20 years.

“She was hopeful and nervous” before entering the ICE office, Miller said. “Now she’s relieved and joyous.”

He added his congregation would remain active as part of the new sanctuary movement.

“It’s become a really important part of our identity as a congregation,” Miller said. “Sanctuary is something we’ve come to see as a core part of our mission.”

Wayward son makes peace with past