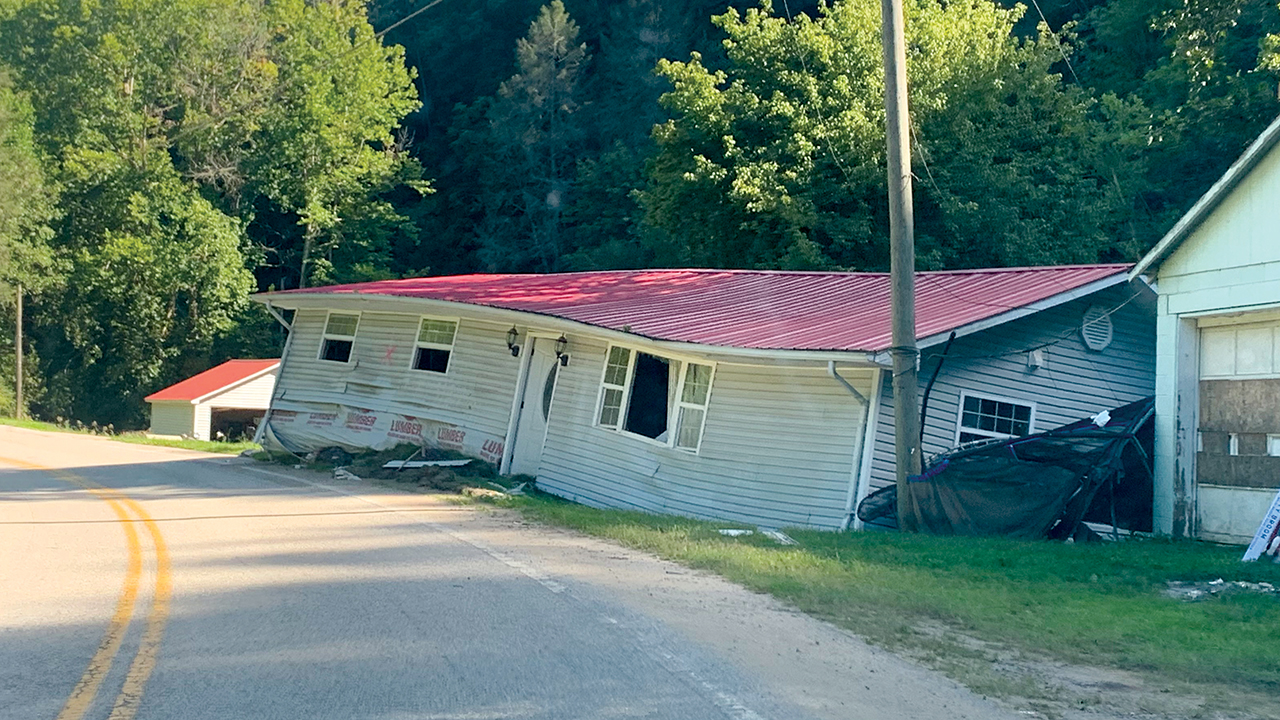 Many homes in eastern Kentucky were twisted and turned when flash flooding hit their foundations. — Larry Stoner/MDS

The first Mennonite Disaster Service Early Response Teams were scheduled to arrive in eastern Kentucky on Aug. 15, ready to muck out homes and clear debris in flood-ravaged communities.

Appalachian communities received a foot of rain in less than 10 hours in late July, resulting in floods that killed at least 37 people.

“In these deeply impoverished nooks and crannies, hardly anyone has flood insurance,” King said. “And hardly anyone has a choice about where to go, other than back into the same deluged mobile home once it’s mucked out.”

King, who returned from an assessment trip on Aug. 10, added: “We need to be here.”

For King, assessing damage means weighing many numbers: inches of rain, numbers of homes affected, average incomes in the area. It also means personally meeting flood survivors. In eastern Kentucky, these survivors are vulnerable by many measures, but overriding everything is what King describes as an “iron will” among people who have been coping with floods for decades.

This time it was the worst they’ve ever experienced.

Flood survivor Kayla is a mother of five who lives in Hindman, Ky. As she talked with a local pastor’s wife, she described how, when the floodwaters rose quickly, she and her children climbed on top of the roof of their mobile home.

“They sat under a tarp for six hours,” King said. “Kayla said she saw things she did not care to see — several dead bodies floating down the river.”

When the waters receded, Kayla realized they had lost everything, including her car. Her husband, Randall, a self-employed woodworker, lost all his tools.

MDS volunteers started mucking out Kayla and Randall’s home — and that’s only the beginning.

The record-breaking aspect of the flood is evident everywhere: First Church of God in Neon, established 85 years ago, had never been flooded. It was deluged with 6 feet of water.

Brenda, another resident, lost her husband two weeks before the flood, and her sister died two months ago. The house was inundated with 2 feet of water. Her home was one of many that was deluged, or twisted and turned off its foundation, or crumpled inside and out.

MDS volunteers are staying at Hindman United Methodist Church and Camp Nathanael in Emmalena. Among other local partners, MDS is working with Mennonite Central Committee’s Sharing with Appalachian People (SWAP) program, which has provided housing and access to its tools and equipment.

SWAP program coordinator Kristin Overstreet expressed how grateful she and the rest of the people in eastern Kentucky were that MDS volunteers had arrived.

“We appreciate how quickly MDS is responding,” she said.

After an initial relief phase, MDS will move into its primary mission of helping flood survivors recover over the long term. In addition to repairing and rebuilding homes, King said he envisions MDS creating the spark for a response that brings people together to work at sustainable housing.

“People look at this as an area heavy-laden with poverty and vulnerability — an area that’s been beaten down so many times,” he said. “But there’s also such a sense of resilience and an acknowledgement that people here are tough and strong.”

As soon as MDS volunteers muck out a house, many flood survivors will return to live in it — despite walls with bare 2-by-4s, no flooring and no furniture.

“Why? Because they have nowhere else to go,” King said. For many people the trauma will last longer than the physical damage. “It’s a harrowing existence,” he said. “They’ve all got rain gauges in their heads.”