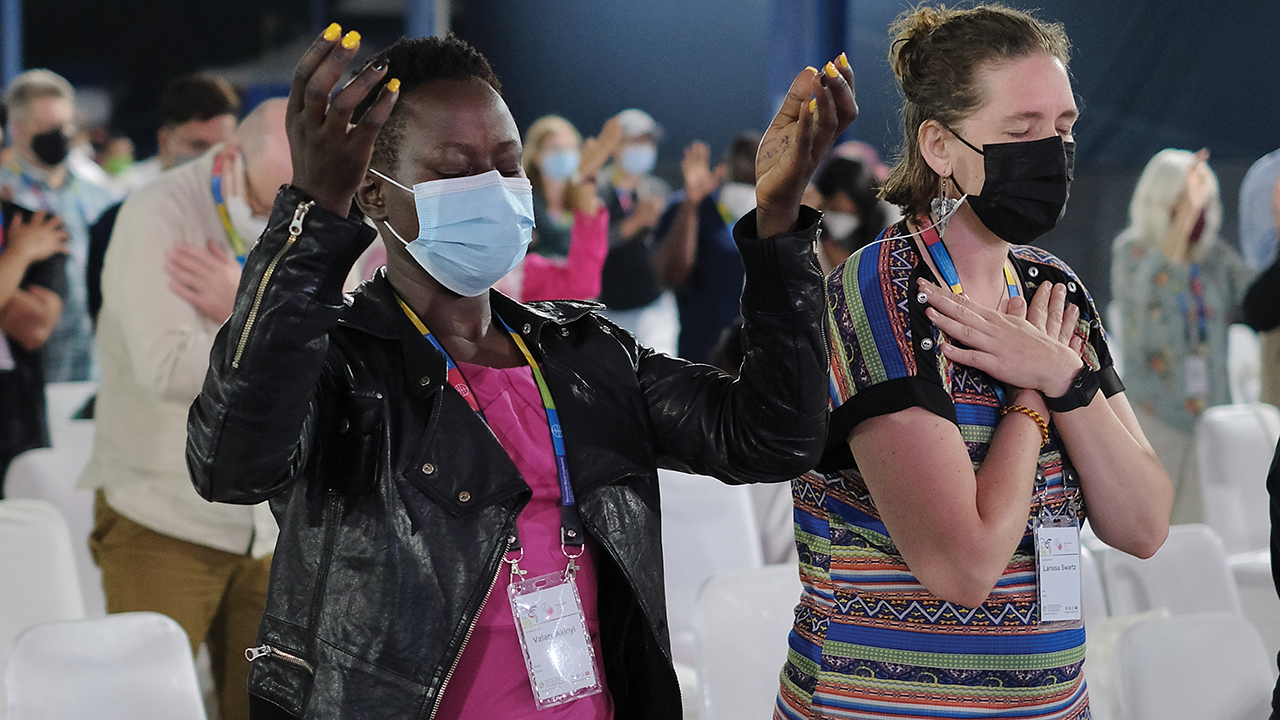 Climbing a steep hill in Salatiga, Indonesia, for daily worship at the Mennonite World Conference assembly, Christians heard the Muslim call to prayer from loudspeakers at nearby mosques.

To a foreigner like me, who had ­never heard it before, the ­Adhan sounded eerie, especially at 4:30 a.m. To a devout Muslim, it signals a daily routine centered on devotion to God.

They’re a fraction within a minority: 107,000 baptized members out of the 10% of Indonesians who are Christian. They live in the country with the world’s largest Muslim population — 207 million, 87% of Indonesians. But it is not an Islamic state. The government is secular.

Even so, five times a day, the dominant faith audibly asserts its priority. Christians might ask ourselves how often we hear an inner call to pray.

Officially, there are only two kinds of Christians in Indonesia, Protestants and Catholics. Christians do not use denominational labels; the three Mennonite synods have names like Evangelical Javanese Church (JKI). Yet, at the assembly’s closing worship service, the governor of Central Java did not hesitate to describe them as Mennonite.

Paulus Widjaja, who chairs MWC’s national advisory committee in Indonesia, told me the churches of his synod, Muria Christian Church of Indonesia (GKMI), affirm a basic principle of Anabaptism every Sunday. In the GKMI liturgy, after the sermon, members recite the Apostolic Creed (“I believe in God the Father almighty, maker of heaven and earth . . .”). But first, they recite the words of 16th-­century Anabaptist spiritualist Hans Denck: “No one can know Christ unless he or she follows him in life.” This corrects the Apostolic Creed’s omission of Jesus’ life and teaching (skipping from “born of the Virgin Mary” to ­“suffered under Pontius Pilate”) and lack of a call to discipleship.

Indonesian Anabaptists deserve our thanks for persevering as assembly hosts amid extreme challenges of the pandemic. It would have been glorious to fill the 12,000-seat Holy Stadium, the Mennonite megachurch in Semarang. But our gratitude for having an assembly at all was much greater than any disappointment.

“What we’re doing with MWC is incredibly radical,” Klassen said, noting that, in Western culture, it is becoming increasingly acceptable for people to publicly voice their intolerance of others. “[At assembly] we’re moving together as people who have so many differences and finding our common life in Jesus.

“People coming together to sing and dance and tell stories and share their lives — it’s remarkably beautiful.”

In Indonesia we saw the beauty not only of fellowship among Christians but also of friendship between people of two faiths, Christianity and Islam, often perceived as enemies. In­donesian Mennonites who cross barriers for tolerance and peace inspire Anabaptists around the world to do the same.