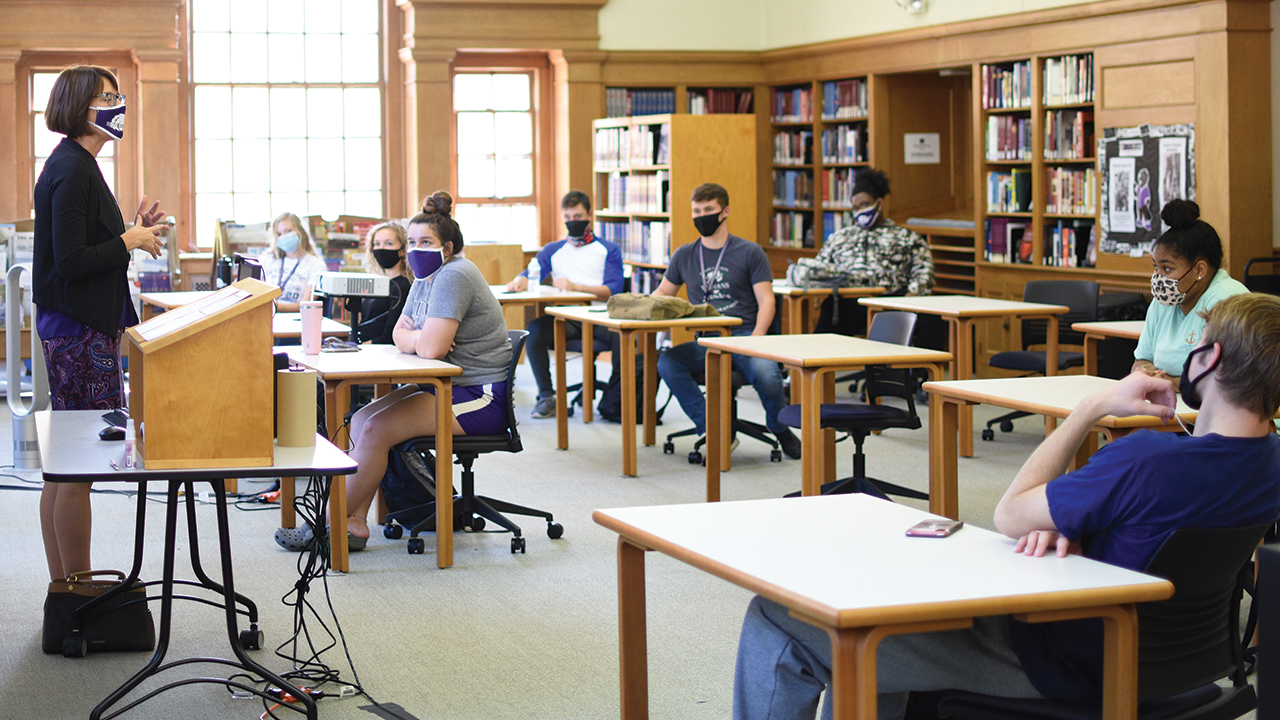 Mennonite colleges and uni­ver­si­ties are working to be flexible as COVID-19 adjustments are made between the fall and spring semesters.

Meeting student needs has been a common theme for Bethel College faculty.

“Students are more stressed — emotionally and also financially,” said associate professor of social work Jennifer Chappell-Deckert, who found out during the mild fall that she loved teaching outdoors. “In the last year [even pre-pandemic], I have spent a lot more time providing emotional support and coaching to students. Our alumni have been generous in donating to student needs.

“Students [more recently] have had to miss class for doctor appointments and to care for family members who were ill — even to go say goodbye to a loved one who was dying. I have stopped assigning points for attendance, and have told them to take the time they need.”

On the other hand, professor of communication arts Christine Crouse-Dick found COVID protocols limited her normal interaction with students.

“There is not one person — student, professor or administrator — who hasn’t needed grace in the midst of this,” she said. “And there is so much opportunity for personal [and] communal growth in that.”
COVID disrupted both academic and extracurricular pursuits, halting one of the greatest football seasons in Bethel history. The undefeated team reached eight victories before the fall season ended in November. Two games will be played in March, with the intention of playoffs following.

Bluffton University began the fall with fan attendance at sports limited to students and staff, but as cases grew in Allen County a shift was made to allowing no fans for early basketball games. Most conference fall sports have been postponed until spring.

“Our student athletes want to compete, and we have found they are taking COVID-19 precautions very seriously in order to compete,” said Phill Talavinia, vice president of student affairs and athletics, and a COVID-19 steering committee member.

“About a dozen new classrooms were established by transforming locations such as Yoder Recital Hall and the Founders Hall stage into socially-distanced classroom spaces,” she said, adding that although it is too early to know how the spring enrollment will compare to the fall, a number of students have inquired about transferring to Bluffton because of its ability to hold in-person classes.

Director of communications Lauren Jefferson said EMU planned from the beginning to have students return home before Thanksgiving, but administrators also decided to minimize in-person events ahead of the break and urge classes to go virtual as part of an effort to semi-quarantine students ahead of travel home. COVID testing was offered before departures. Within days of the decision, Pennsylvania required proof of a COVID test for out-of-state travelers.

“Our total COVID numbers have stayed low throughout the semester but the fact that all 210 pre-Thanksgiving tests of campus community members were negative was a major barometer of both the health of our community and our collective persistence and vigilance in following public-health protocols,” she said.

Goshen College also provided testing for students before they returned home between semesters, resulting in 14 positive cases out of 382 tests ahead of Thanksgiving. Students are encouraged to be tested before returning to campus in January, when the college will increase its testing throughout the semester.

Hesston College is also requiring proof of a COVID test before students return from break, when everyone will enter a two-week “modified quarantine” in single rooms, which were the biggest factor in limiting virus spread during the fall. In-person instruction is planned to return, along with athletic competitions.

Tabor College announced in a prayer request that President Jules Glanzer was admitted to a hospital Nov. 27 due to COVID. Tabor Board of Directors chair Susan Franz Koslow­sky appointed Rusty Allen, executive vice president of operations, as acting president.

“This decision is in response to President Jules Glanzer’s hospitalization and care in the ICU to treat his COVID-19 diagnosis,” she said in a separate announcement.

A group of vice presidents is responsible to make all decisions.

“These duties and appointments will remain in effect during this time that President Glanzer is unable to fully function and fulfill the duties of the office of the president,” Koslowsky said.

Glanzer was in the ICU, and his lungs were not absorbing enough oxygen, until a Dec. 11 update shared he had moved into a regular hospital room. In a Dec. 14 update, the most recent available at press time, Glanzer said he was on the road to recovery but not ready for home care.

Tabor anticipates continued use of its fall protocols into the spring semester. Fans were in limited attendance at fall sports, and winter sports are anticipated to go forward.

Fresno Pacific University announced Nov. 23 that classes will continue to be online-only for the spring semester. Leaders were preparing a hybrid model for spring semester traditional undergraduate courses at the main campus when Fresno County was returned to California’s most restrictive tier of COVID risk.

FPU hoped to hold commencement ceremonies for a record number of May and December graduates in a drive-through format Dec. 11 and 12, but a shelter-in-place order canceled the event. Items graduates would have picked up will be mailed in the new year.