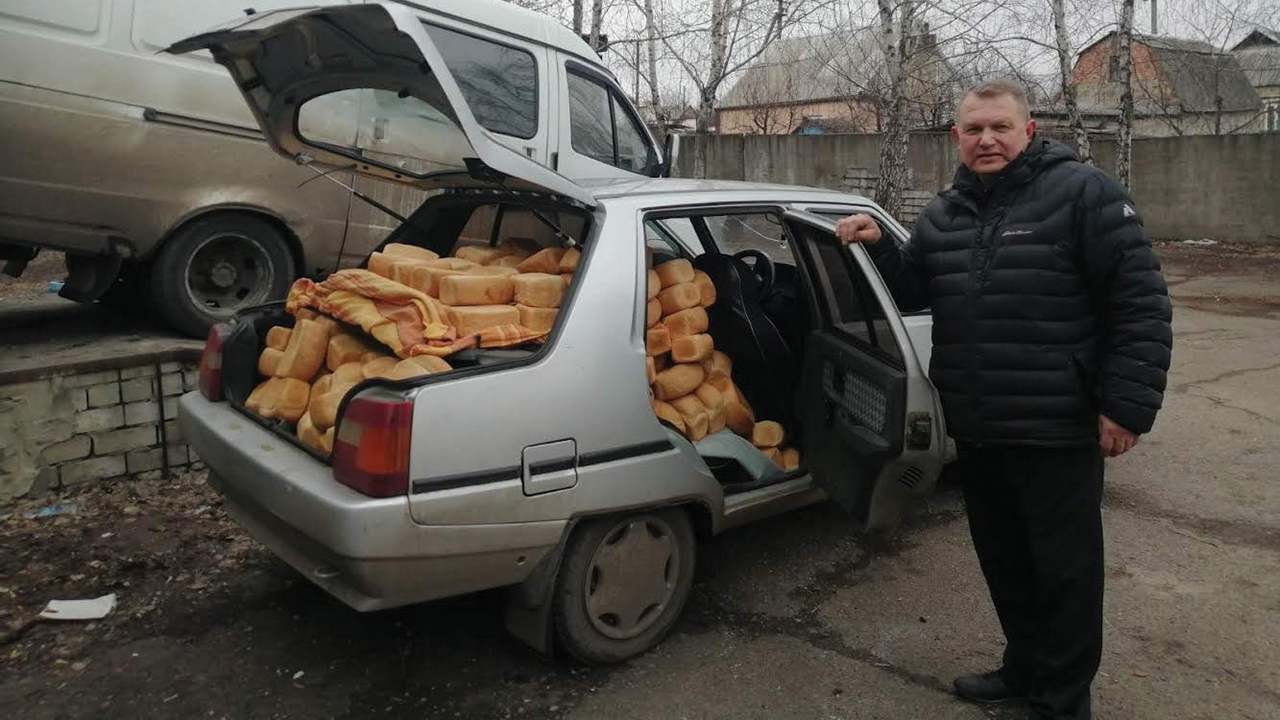 As the Russian military’s invasion of Ukraine shifts to attacking civilian noncombatants instead of military targets, Anabaptists around the world are working to send assistance to Ukrainian church workers struggling to help their neighbors.

Multiply, the North American Mennonite Brethren mission organization, ceased referring to Ukrainian church leaders and staff by full names on March 16 as more politicians and priests have been abducted and disappear.

Pastors of the Association of Mennonite Brethren Churches in Ukraine reported it is increasingly difficult to give shelter, food, medicine and water to people fleeing conflict.

A pastor in Berdyansk said families escaping the besieged city of Mariupol seek shelter at his church, driving long hours in bitter cold in cars without windshields.

A pastor in Kherson, a city almost completely under Russian control, said both he and his wife have been sick, and the couple’s baby could be delivered any day.

The AMBCU leader from Zaporizhzhia is helping coordinate evacuation of refugees to Germany, where Mennonite Brethren congregations have welcomed more than 50. Multiply regional team leader Johann Matthies reported volunteers brought 18 refugees to the church in Detmold on March 15. Others came to the Bielefeld church, where a worship service was held in Russian and Ukrainian.

The congregations’ welcome is one part of a broad response by Anabaptist conferences across Europe.

José Arrais, a Mennonite Brethren leader in Portugal who is the European regional representative for Mennonite World Conference, explained that Anabaptists in Portugal, Spain, France, Italy, Germany, Switzerland, Austria, the Netherlands, Lithuania and the United Kingdom have come together to support AMBCU, Multiply, Mennonite Central Committee and other ministries in Ukraine.

“It’s been incredible how all of them are mobilized in such a great and loving effort,” he said. “… We never expected to have a situation like this in Europe, but when the reality came, all the conferences reacted with purpose to help the Ukraine conference.”

Many conferences have committees and groups to coordinate relief efforts. The European Mennonite Relief Organization and Mennonite Central Committee connect these groups.

In Lithuania, the Free Christian Church — a member of the International Community of Mennonite Brethren — counts 230 members in seven congregations. Members have been driving roughly 700 miles one-way through Poland, Slovakia and Hungary to deliver food and clothing.

“The effort from this little conference is fantastic,” Arrais said. “And let’s not forget that even though in one direction it’s easy to cross the border from Hungary to Ukraine, due to the huge flow of refugees on the return it takes at least four hours to cross the border again.”

Arrais is one of several Mennonites from Europe and North and South America on the international advisory board of London-based Dnipro Hope Mission, or DHM, which is supported by the United Kingdom’s Anabaptist Mennonite Network, among other groups. AMN trustee Joshua Searle is the organization’s board chair. AMN has supported ministries in the Zaporizhzhia area for several years. It provided financial support to AMBCU in February to prepare for the invasion and give assistance to neighbors.

DHM had been working to build the “House of Hope” to the north in Vasylkivka to provide hospitality and worship space until the invasion arrived. Arrais said construction was not yet complete when war broke out, but finished bathroom and showers have been helpful for the facility’s current use as housing for refugees and Ukrainian troops.

In North America, the Mennonite Brethren Foundation established the Ukraine MB Church Relief Fund to provide relief and refugee assistance to the two dozen congregations and five church plants of AMBCU. MB Foundation contributed $25,000, and by March 18 total contributions had surpassed $193,000. An initial distribution of $49,500 was sent to AMBCU on March 9 as congregations in occupied areas worked to fuel a handful of vehicles to evacuate people, and a week later another $45,000 purchased three vans to transport supplies and people.

“Our team has focused its efforts on distributing supplies to volunteers who will deliver directly to the families in the areas most affected by heavy shelling and artillery fire,” he said.

The center served as a bomb shelter during the invasion in late Feburary and has been the sole source of hot meals for some residents throughout the Russian occupation. Workers reported March 13 that a nearby schoolhouse built by Mennonites in the former village of Ladekopp was a Russian checkpoint with snipers on the roof.

Stores were empty, gas was no longer available, and clinics and pharmacies closed as medications ran out. The center’s van has been making trips to move people to safer areas in the west. The center is sharing food and serving hot meals in Molochansk and supporting soup kitchens in Melitopol about 30 miles to the south and food distributions in Krasnogorovka 140 miles to the east near Donetsk.

The center reported March 11 it had expanded from cooking food and baking bread to launching a milling enterprise. In response to assistance over the years, farmers donated wheat and corn. A psychiatric hospital has a mill, where the donations have been bagged and distributed to hundreds of people facing hunger.