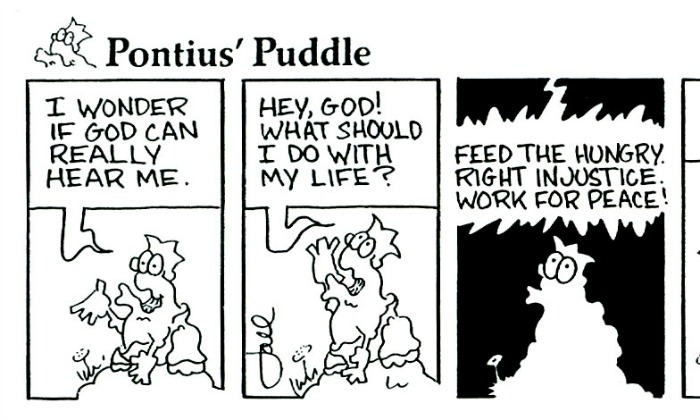 A Goshen resident since 1970, Joel was well known for his cartoon strip “Pontius Puddle.”

The strip was published in more than 200 newspapers worldwide —including The Mennonite—featured a crowned frog living in a puddle musing on matters of faith, according to the Elkhart Truth.

He was currently working as content coordinator for the Museum of the Bible in Washington D.C. He was developer of Israel’s Nazareth Village and Menno-Hof in Shipshewana.

He was also an accomplished screenwriter for numerous films including The Radicals and the award winning Disney movie Miracle in Lane 2 which he co-wrote with Don Yost.

Nancy wrote this on the CaringBridge website for Joel on May 8: “This morning Joel died. Justin, Julian and I had a long time together before hand to pray, talk and listen to special music with Joel. Then other family and friends came by to say goodbye and pray and sing … The friends and family then sang in the waiting room hitting all of my favorites as well as favorites of others.”

A graduate of Hesston (Kan.) College and Goshen (Ind.) College, Joel was a member of College Mennonite Church, Goshen.

A memorial service took place on May 11 at College Mennonite Church with Pastor Phil Waite will officiating. Cremation will take place at Yoder-Culp Crematory. Memorial contributions may be given to Center for Healing and Hope, Nazareth Village or Menno-Hof. Online condolences may be shared here.