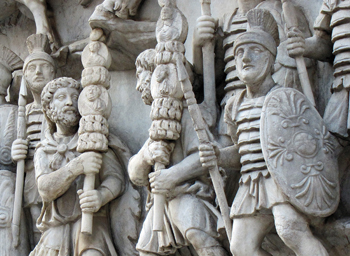 Roman soldiers in these second-century statues carry the kind of military standards with images of the emperors that devout Jews deemed idolatrous. — J. Nelson Kraybill

When leaders become unjust or blasphemous, people of conscience protest. Jesus once broke furniture at the temple when he saw merchants turning the place into a den of thieves. Whatever we make of that dust-up, Jesus’ teaching and actions otherwise were nonviolent. But he did not hesitate to speak boldly to an unworthy political leader. “Go tell that fox . . .” he retorted upon hearing that Herod wanted to kill him (Luke 13).

The first-century Jewish historian Josephus says that on one occasion Pontius Pilate moved troops from Caesarea to Jerusalem and had them publicly display Roman military standards. These were ceremonial poles featuring small busts of the “divine” emperors. “Our law forbids the making of images,” says Josephus, who notes that Pilate was the first Roman ruler to so violate Jewish religious sensitivity. It was a divisive act of political chauvinism as calculated as any blustering tweet today.

Jews protested and went “in a multitude” to confront the governor at his headquarters in Caesarea. Wrapping himself in a mantle of patriotism, Pilate said that removing the standards would be an “insult to the emperor.”

After enduring six days of protest at his mansion, the governor agreed to meet protesters at the stadium in Caesarea. Unknown to them, Pilate had the military lying in wait. When Jews presented a petition, Pilate gave a signal. Soldiers rushed in with weapons ready and surrounded the protesters.

Determined to dominate the situation, Pilate threatened protesters with immediate death if they did not stop their action and return to Jerusalem. But protests continued after this curfew, only now Jews “threw themselves on the ground and bared their throats, declaring that they would gladly welcome death rather than dare to transgress the wisdom of their laws.” Pilate was astounded at the strength of their conviction and promptly ordered the offending images transferred back to Caesarea.

Trouble was not over. Jews at Jerusalem soon vehemently protested when Pilate took money from their temple treasury for an aqueduct to bring water into Jeru­salem. This time Pilate overreached. He had soldiers dress up in civilian clothes and carry hidden clubs. When protesters hurled insults and abuse at Pilate, “as such throngs commonly do,” he released his troops onto them.

Indiscriminate violence ensued. Soldiers went out of control, presumably fueled by the anti-Semitism common among first-century Romans. They attacked, “equally punishing those who were rioting and those who were not, showing no mercy.” Many Jews died on the spot. When a similar massacre occurred against Samaritans at Mount Gerizim, Emperor Tiberius summoned Pilate to Italy to face trial.

Pilate’s hearing at Rome never happened because Tiberius died, and Emperor Caligula apparently dismissed cases remaining from his predecessor. But Pilate did not return to Palestine, and died in Italy.

Actions of protesters did not directly end the misrule of a ruler who lacked empathy and sowed division. But Pilate’s response to peaceful protest revealed even to Roman authorities how inappropriate it was for him to remain in office. The protesters did not act in vain.

J. Nelson Kraybill is president of Mennonite World Conference and president emeritus of Ana­baptist Mennonite Biblical Seminary. See more writing and information about his upcoming tours to Israel-Palestine at peace-pilgrim.com.