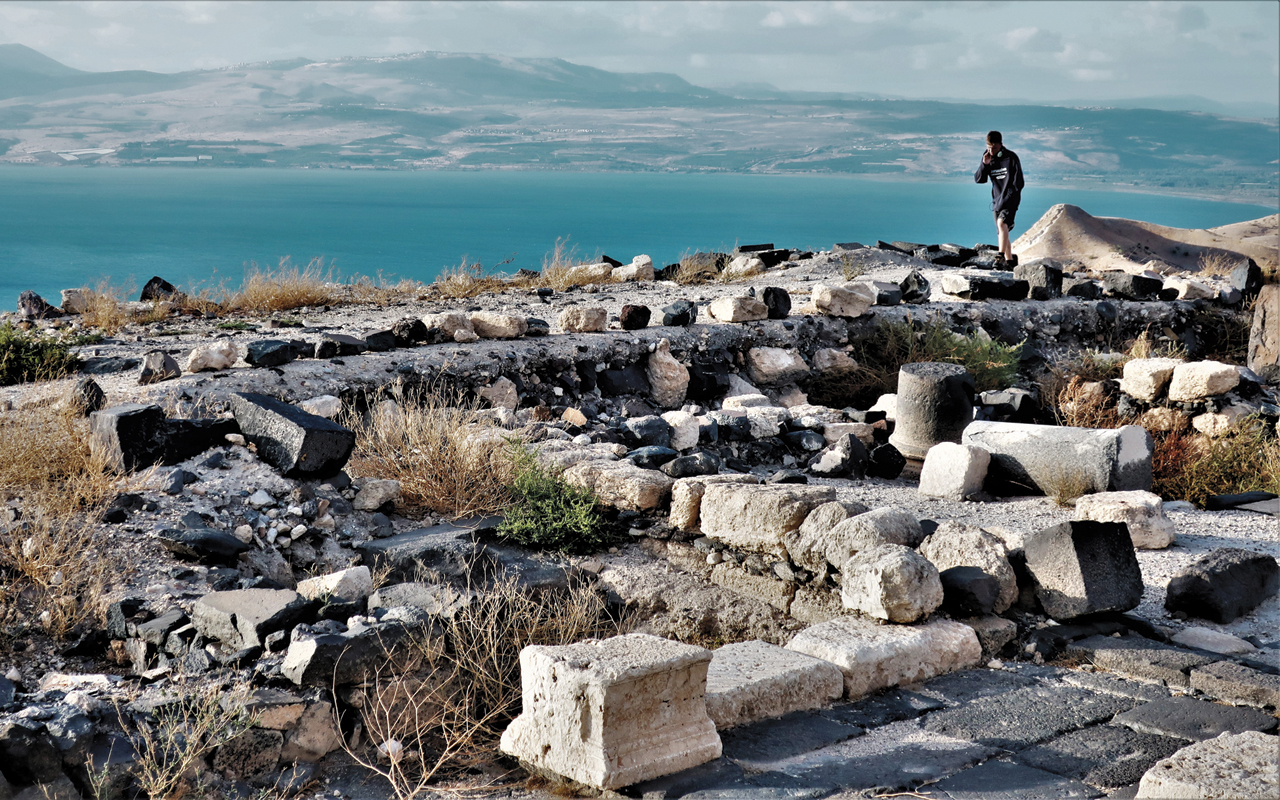 Capernaum and the hills where Jesus preached the Sermon on the Mount are on the distant shoreline in this view from ancient Hippos. — J. Nelson Kraybill

Amid pandemic, with national and ecclesial cultures facing up to systemic racism, I hear Jesus speak to the church: Let your example and witness be bold! What will the world see? You cannot hide.

When Jesus told followers that they are a “city set on a hill” (Matthew 5), the only example of such a city visible from the area where he preached was Hippos, eight miles across the Sea of Galilee.

Greek-speaking Hippos was perched 1,150 feet above the Sea of Galilee, atop a pyramid-shaped mountain. At night its blazing lights shimmered across the water to the fishing village of Capernaum.

With its ruins off the beaten track today, Hippos is accessible by a damaged roadway and a bit of hiking. Because the mountain had strategic military value in modern wars, land mines infest adjacent areas. Wise visitors are careful.

Alone at Hippos except for one other explorer, I hike through ruins from the time of Jesus and from later centuries when Christian faith was well-established. A massive earthquake in A.D. 749 made Hippos uninhabitable, leaving giant columns from a municipal building all lying in the same direction.

Because it was a pagan city, few of Jesus’ Jewish followers in the first century ever would have visited Hippos. But it is possible that the man named Legion, from whom Jesus expelled demons into swine, returned to his home here when healed (Luke 8). Following Jesus’ instructions, the restored man went “proclaiming throughout the city [Hippos?] how much Jesus had done for him.” Mark 5 says Legion also witnessed in the Decapolis — a league of 10 Greek cities! A one-man city-set-on-a-hill, Legion could not be hid.

The early church, expanding on Jesus’ urban imagery, described the people of God as a city. Heb. 11:10 says Abraham “looked forward to the city . . . whose architect and builder is God.” John of Patmos saw the “holy city” coming down out of heaven (Revelation 21). City imagery in the New Testament seems to represent both the future kingdom of God and the church on Earth now.

This New Jerusalem city is where followers of Jesus claim primary identity — not in nation, political party, race, ethnicity or social class. As a community we are a city set on a hill. Let us be bold to profess and model something different from the racism, nationalism and polarization rampant around us.

By God’s grace, in this church-city we can learn to recognize our own patterns of racism and act decisively to end injustice. Showing love for neighbors, we can wear masks during pandemic, gather online instead of in person and observe other inconveniences that save lives. In a divided society, we can listen respectfully and try to understand underlying fears and hopes, even of those with whom we disagree.

When the pandemic recedes, we can open church doors to those who have been pushed to the margins. That will be some city set on a hill, and the world will take note.

J. Nelson Kraybill is president of Mennonite World Conference and president emeritus of Ana­baptist Mennonite Biblical Seminary. See more writing and information about his upcoming tours to Israel-Palestine at peace-pilgrim.com.