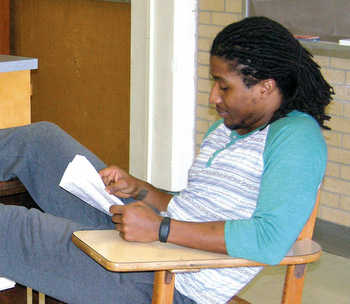 NORTH NEWTON, Kan. — When professor of communication arts John McCabe-Juhnke put his former “pilot project” into Bethel College’s interterm curriculum, he knew his students would learn things that surprised them.

McCabe-Juhnke has been doing prison theater for more than a decade. In 2014, he and student volunteers spent January working with inmates at Hutchinson Correctional Facility to produce Inside Story, a series of dramatic sketches based on first-person stories and student and inmate journals.

“The one thing you can count on when working in prison,” McCabe-Juhnke said, “is that there’s always going to be something.”

This time the “something” was the prison going on lockdown two and a half weeks in after a series of inmate fights. None of the 10 men in the theater class was involved. But all visits were canceled, and the “inside” performances of Inside Story, one for the prison population and one for the public with security clearance, were canceled with them.

“This is the first time I’ve experienced lockdown of the whole prison,” McCabe-Juhnke said, “though I have lost actors [because of their personal issues] or had guys unable to come because a section was on lockdown.”

Until the lockdown, the students went to the prison three afternoons a week. Everyone kept journals — the students on GoogleDocs, the men in blue books often used for exams.

The group got more comfortable with each other as they participated in warm-up exercises, learned basic theater techniques (only a handful of the students had any theater experience), narrowed to four the list of short plays McCabe-Juhnke brought in and began rehearsing them.

The Hutchinson Correctional Facility men had most of the roles, with a student as an “understudy” to each. The students would then perform the plays on the Bethel campus in early February, framed by journal entries and observations from the experience of being in prison.

For the production of Inside Story on campus, Feb. 5-6, the lockdown was included in the story.

“The concept remained the same,” McCabe-Juhnke said, “allowing the audience to see the plays we worked at [with the inmates] and hear the context we worked in.”

Inside Story first sketched out the initial awkwardness of students — almost none of whom had been inside a prison before — and inmates getting to know each other, and the development of empathy on both sides.

“I was scared, worried, nervous, whatever word you want to use,” said Allie Brown, senior from Hesston. “It’s hard to enter a new place when you don’t know what to expect. I expected our experience to be intimidating, and I hoped for kindness. I found both.”

Meanwhile, Jaysen, one of the inmates, wrote in his journal that the students were showing “a lot of anxiety and some trepidations in regards to entering a prison setting and working with prisoners. Makes you wonder how comical it would seem if the students realized how much anxiety the prisoners feel in working with [them]. Until we come to know each other better, we see nothing but the distances that separate us, and not whatever commonalities we may share.”

Part of working at empathy, for the students, was also considering the victims of the crimes that had put the men into prison in the first place.

“Working side by side with guys who are ‘lost and forgotten’ made us see our own privilege in a new way,” added Jay Puletapuai, junior from Anchorage, Alaska.

And then came the unanticipated need to deal with the abrupt end of the exchange. As a final assignment, McCabe-Juhnke had the students write letters to the men, though not to be sent.

Greg Parham, senior from Pomona, Calif., wrote: “The prison culture is something unpredictable, so I just pray nothing happens to any of you, because I feel like you guys are genuine people, and I really appreciate you guys for helping me become a better person.”