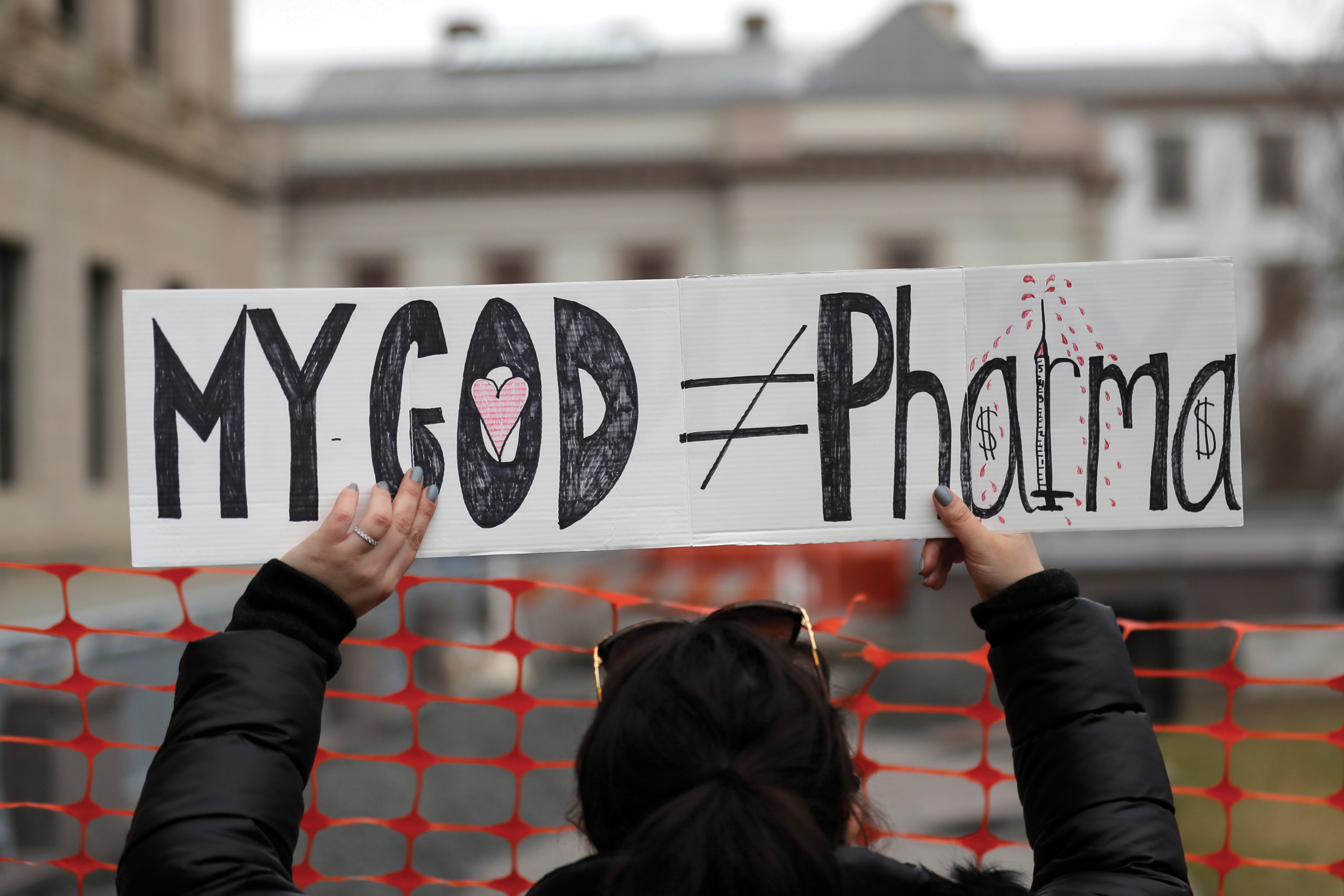 On Jan. 13, 2020, a woman holds a sign during a protest at the state house in Trenton, N.J. Religious objections, once used only sparingly to get exempted from required vaccines, are becoming a widely used loophole against the COVID-19 shot. — Seth Wenig/AP

As significant numbers of Americans seek religious exemptions from COVID-19 vaccine mandates, many faith leaders are saying: Not with our endorsement.

Leaders of the Greek Orthodox Archdiocese of America said Sept. 16 that while some people may have medical reasons for not receiving the vaccine, “there is no exemption in the Orthodox Church for Her faithful from any vaccination for religious reasons.”

The Holy Eparchial Synod of the nationwide archdiocese, representing the largest share of Eastern Orthodox people in the United States, urged members to “pay heed to competent medical authorities, and to avoid the false narratives utterly unfounded in science.”

“No clergy are to issue such religious exemption letters,” Greek Orthodox Archbishop Elpidophoros said, and any such letter “is not valid.”

Similarly, the Evangelical Lutheran Church in America issued a recent statement encouraging vaccine use and saying that “there is no evident basis for religious exemption” in its own or the wider Lutheran tradition.

The Roman Catholic Archdiocese of New York laid out its own stance during the summer, saying that any priest issuing an exemption letter would be “acting in contradiction” to statements from Pope Francis that receiving the vaccine is morally acceptable and responsible.

Both the Vatican and the U.S. Conference of Catholic Bishops have said Catholics can receive the vaccines in good conscience given the lack of alternatives and the goal of alleviating suffering — even while objecting to research with even a remote connection to abortion.

A number of dioceses have adopted policies similar to New York’s, and bishops in El Paso, Texas, and Lexington, Kentucky, have mandated vaccines for employees.

But other Catholic jurisdictions are more accommodating of exemptions. The Colorado Catholic Conference, the policy arm of the state’s bishops, has posted online a template for a letter that priests can sign saying an individual parishioner may draw on Catholic values to object to the vaccines. South Dakota’s bishops have also taken that stance.

At issue for many Catholics and other abortion opponents is that the most widely used COVID-19 vaccines were tested on fetal cell lines developed over decades in laboratories, though the vaccines themselves do not contain any such material.

A clerical letter wouldn’t necessarily be needed for someone to be granted an exemption — federal law requires employers make reasonable accommodations for “sincerely held” religious beliefs — though a clergy endorsement could help bolster a person’s claim.

Robert Jeffress of First Baptist Dallas, a Southern Baptist megachurch, said he and his staff “are neither offering nor encouraging members to seek religious exemptions from the vaccine mandates.”

“There is no credible religious argument against the vaccines,” he said via email. “Christians who are troubled by the use of a fetal cell line for the testing of the vaccines would also have to abstain from the use of Tylenol, Pepto Bismol, Ibuprofen and other products that used the same cell line if they are sincere in their objection.”

The Church of Jesus Christ of Latter-day Saints does not provide religious exemptions for vaccines for members, according to church spokesman Eric Hawkins. Leaders of the Utah-based faith have made pleas for members to get vaccinated even as doctrine acknowledges it’s up to individual choice.

Religious objections, once used sparingly to get exempted from various required vaccines, are becoming a much more widely used loophole against the COVID-19 shot.

Most vaccine requirements offer exemptions for certain medical conditions or religious or philosophical objections. The use of such exemptions, particularly by parents on behalf of their schoolchildren, has been growing over the past decade.

The allowance was enshrined in the federal Civil Rights Act of 1964, which says employers must make reasonable accommodations for employees who object to work requirements because of “sincerely held” religious beliefs.

A religious belief does not have to be recognized by an organized religion, and it can be new, unusual or “seem illogical or unreasonable to others,” according to rules laid out by the Equal Employment Opportunity Commission. But it can’t be founded solely on political or social ideas.

This puts employers in the position of determining what is a legitimate religious belief and what is a dodge.

Some religious leaders are trying to help people circumvent COVID-19 mask and vaccine requirements. In Tulsa, Okla., Pastor Jackson Lahmeyer is offering a “religious exemption” form on his church’s website, along with links for suggested donations to the church. The 29-year-old is running for the U.S. Senate as a Republican.

Anyone interested can get the form signed by a religious leader, or Lahmeyer can sign it himself if the person joins the church and donates. He said more than 35,000 people downloaded the form in three days.

But obtaining a religious exemption is not as simple as producing a signed form. Measles outbreaks in schools over the past decade prompted some states to change their policies. Some now require a signed affidavit from a religious leader, instead of an online form. California got rid of nonmedical exemptions in 2015