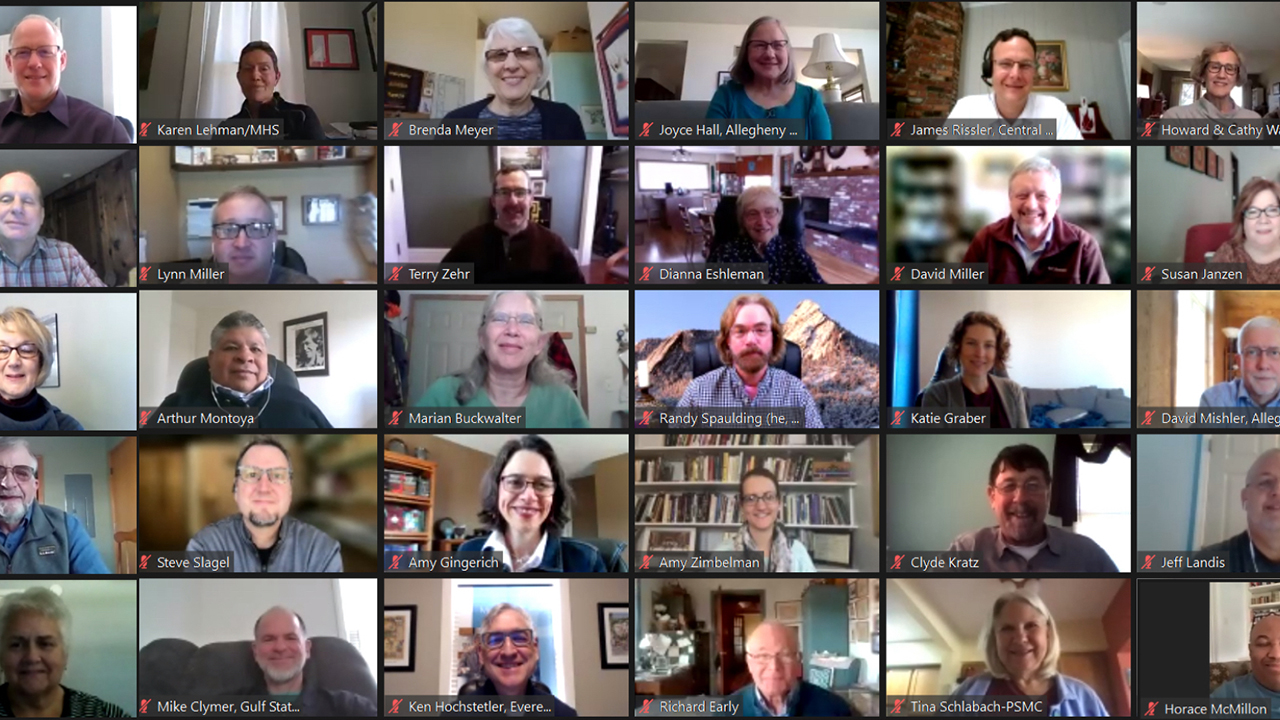 The Constituency Leaders Council of Mennonite Church USA recommended two out of four proposed resolutions be forwarded to the Delegate Assembly at an online meeting March 12-13.

The two resolutions that received support address retiring the denomination’s Membership Guidelines and increasing accessibility for people with disabilities.

The two other proposals address inclusion of LGBTQ people in the denomination and justice in the U.S. criminal legal system. CLC members did not reach consensus on these resolutions.

On March 24, the Resolutions Committee will process the CLC’s feedback on all four resolutions and consider whether to forward three — those on accessibility, LGBTQ inclusion and justice in the U.S. criminal legal system — to the Delegate Assembly for in-person deliberation at a special session tentatively proposed for late spring 2022.

The exact timeline for deciding whether to forward these three proposed resolutions to delegates has not been determined.

On April 16, the Executive Board will decide whether the resolution on retiring the Membership Guidelines will be submitted to the Delegate Assembly in 2022.

The Membership Guidelines prohibit pastors from performing same-sex covenant ceremonies. Executive director Glen Guyton said this policy is not consistently enforced, and the Executive Board has never had the authority to enforce it.

Guyton said the resolution would retire the guidelines while calling the church to “commit to the difficult work of being church together amidst our differences, working at biblical justice and reconciliation where there is conflict.”

“This proposed resolution doesn’t change anything in our current practice,” he said. Area conferences would continue to manage and approve ministerial credentials as they see fit.

Seven out of the eight breakout groups responded that the proposed resolution should be sent to the Delegate Assembly. The remaining group was unable to reach consensus.

“Resolution for Repentance and Transformation”

According to Spaulding, the proposed resolution was endorsed by 31 organizations, including 26 Mennonite congregations and almost 500 individuals.

Describing differences between this resolution and the Executive Board’s Membership Guidelines resolution, Guyton said: “The EB resolution addresses polity. It deals with one aspect of how we operate. The Inclusive Mennonite Pastors resolution goes beyond polity and addresses other systemic and justice issues.”

Crosby said: “Sometimes the injustice within is the most difficult to acknowledge and address. Will we keep ignoring the pain radiating from some members of the body of Christ?”

Spaulding said: “Exclusion and mistreatment of LGBTQIA people by the church have driven many people away from participation in the church, even causing some to set aside their faith altogether.”

Some breakout groups expressed support for broadening the conversation on human sexuality across the denomination, hearing the testimonies of those who have experienced harm and doing the work to listen and build relationships. However, some groups said they struggled with the language of the resolution, with some describing it as “challenging,” “scolding” and “not invitational.” Others wondered whether there were more pastoral ways to accomplish the resolution’s goals.

Four of the eight breakout groups said the proposed resolution should not be forwarded to the Delegate Assembly. Three groups indicated it should be considered for further study by the denomination. One group recommended it be moved forward.

Jeanne Davies, executive director of Anabaptist Disabilities Network, and Clare Krabill, COO of Mennonite Heath Services, an agency of MC USA, presented a resolution that aims to help all members “recognize and seek to remove barriers to belonging for people who have disabilities.” Written by a team from ADN and MHS, the resolution asks congregations to increase their accessibility to people with disabilities while offering resources and support through the ADN.

Charlotte Tsuyuki Lehman, pastor of Reba Place Church in Evanston, Ill., and Stephen Lamb, associate pastor of Living Water Community Church in Chicago, presented this resolution. Written by Zachariah Begly of Reba Place Church and Elizabeth Reimer of Lombard Mennonite Church in Illinois, it calls congregations to support 10 commitments, including learning about the injustices in the U.S. criminal legal system, speaking with and learning from former prisoners, supporting the families of the incarcerated, learning how the U.S. legal system has been shaped by racist assumptions and advocating for reforms such as ending cash bail and mandatory minimum sentencing.

“While we felt that this does advance our vision of MC USA’s Renewed Commitments, we were not able to reach consensus on whether this should be sent to the Delegate Assembly,” said Ryan Koch, moderator of Mountain States Mennonite Conference, on behalf of his breakout group. “Some felt that further study was an appropriate way to move forward. Some also felt that the resolution needs more vetting and additional sources, and some wanted law enforcement to be part of the process.”

Spokespersons from other groups provided similar feedback. The Resolutions Committee will process this input.

Guyton presented several proposed changes to denominational bylaws, including removing The Mennonite as an agency of the church. The Mennonite merged with Mennonite World Review in 2020 to become Anabaptist World, an independent organization.

As these are more routine changes, the Delegate Assembly will vote on these recommendations during its abbreviated virtual gathering on July 10, 2021.

The CLC is an advisory group of leaders from area conferences, agencies and constituency groups that meets one or two times per year to counsel and advise the Executive Board, the Delegate Assembly and MC USA, functioning as denominational elders.