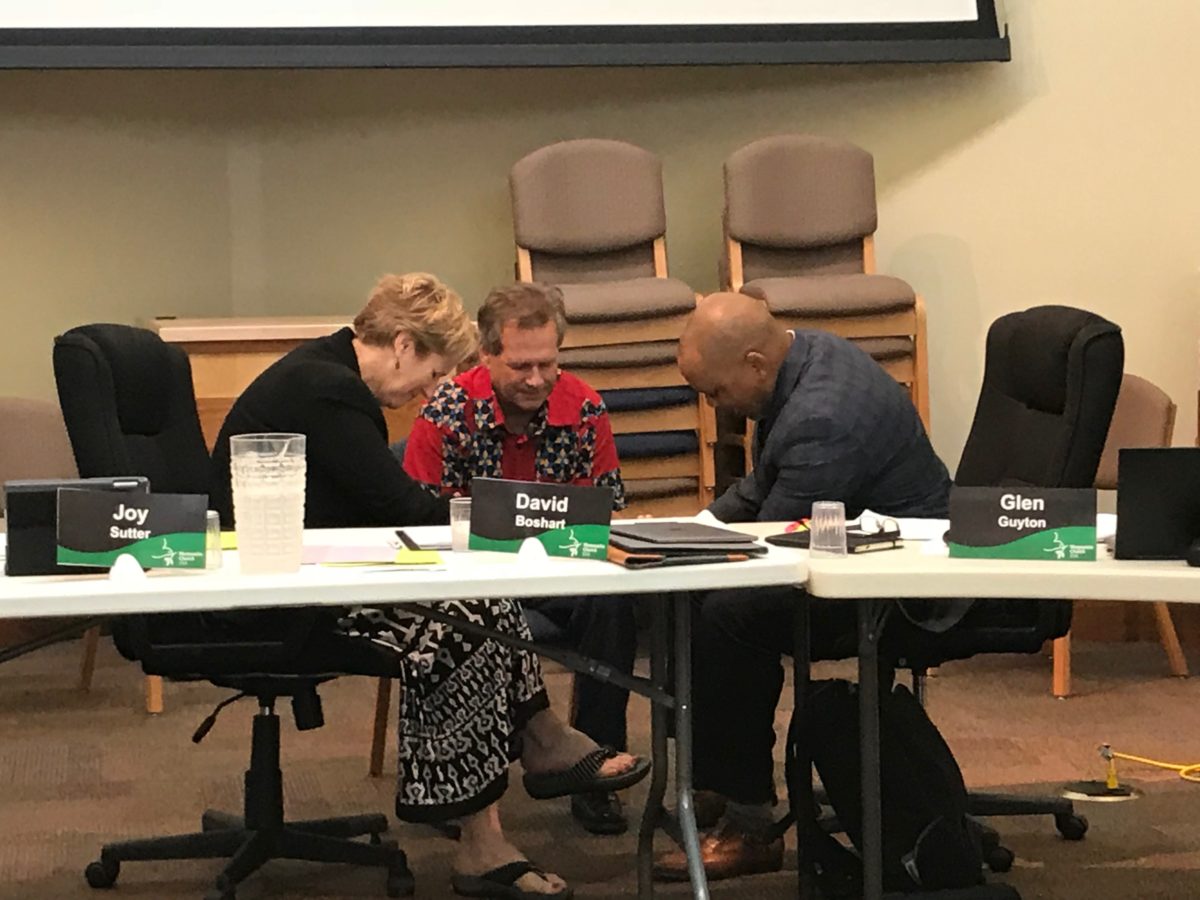 Glen Guyton met with the Mennonite Church USA Executive Board (EB) for the first time as executive director Aug. 16-18 at the MC USA offices in Elkhart, Indiana.

MC USA moderator David Boshart opened the EB meeting by welcoming the board to “a new chapter in Mennonite Church USA.”

“We are grateful for [Guyton’s] willingness to say yes to the call of the church as our new executive director,” Boshart said.

With MennoCon19 coming up in July 2019, the EB heard an update from convention planning staff and reviewed a draft of the overall schedule and Delegate Assembly. Guyton announced some proposed changes to the structure of convention, including all worship services being held jointly with youth and adults and an equipping focus for all seminars and workshops.

The Journey Forward process will take center stage at the Delegate Assembly, and will be incorporated into the overall convention. According to the proposed process plan, delegate sessions will feature storytelling and table discernment around questions shaped by MC USA’s three “Renewed Commitments”: Follow Jesus; Witness to God’s Peace; and Experience Transformation.

Iris de León-Hartshorn, director of operations for MC USA, presented the delegate process plan. The process will seek delegate feedback around a biennial denominational peace witness focus and resources needed at the congregational level to engage in transformative relationships across difference.

EB members began a conversation about resolutions and whether there will be any votes brought before delegates in 2019. The board signaled affirmation to move away from resolutions if possible, but no final decisions were made.

“There are ways of working at differences besides resolutions,” said Guyton. “Our leadership role as a board is to point people to a common goal.”

Board members asked questions about whether the Membership Guidelines would be voted on or discussed at the convention. Staff presented an initial proposal to design a two-year process leading up to convention in 2021 to gain churchwide clarity around some of MC USA’s foundational documents, including the bylaws and Membership Guidelines, and how accountability works within the MC USA system.

“With the leadership transition, the timing was too tight to design a good process around these questions for 2019,” said Guyton. “I am aware that this needs to be addressed as soon as possible, but my priority is to help MC USA begin to think about its mission, to grow as communities of grace, joy and peace. After that we can work on documents. We also need to gain clarity within our system as to the power and authority that rests in conferences and congregations. Right now, confusion is making it hard to function in healthy ways. We have until 2021 to get ready and get it right.”

The board affirmed a plan for staff to continue developing this proposal and to update the document “Developing Resolutions for MC USA,” which will be discussed at the next EB meeting in November.

The board voted and approved future convention locations in Cincinnati, Ohio, in 2021 and Kansas City, Missouri, in 2023.

The EB reviewed a new strategic plan proposed by Guyton for 2019-2021, which included three overarching “global ends” for the work of denominational staff, with strategies and measures to work toward these ends. The global ends are based on the three “Renewed Commitments” of the Journey Forward process.

Unlike the Purposeful Plan, which was structured for churchwide ownership and engagement, the new strategic plan is limited as an internal, focused guide for EB priorities based on what they are hearing through the Journey Forward process, and will shape the work of MC USA staff moving forward.

Board members expressed gratitude for more frequent reporting on priorities, and affirmed the emphasis on building stronger partnerships with agencies, conferences and constituency groups to work at these priorities together, with combined resources.

The EB approved changes to the resource Sexual Abuse and Non-Credentialed Individuals, developed by MC USA’s Panel on Sexual Abuse Prevention. The EB revised their April action to name the resource as “recommendations and guidelines,” rather than “policy,” as originally intended and in line with MC USA polity. The EB was informed of other changes made to the resource based on feedback received from members of MC USA. In the guidelines section, language was changed from victim/offender to complainant/accused. In addition, an introduction was added to the resource that says, “We always recommend consultation with local sexual abuse centers, legal counsel and victim advocacy organizations.”