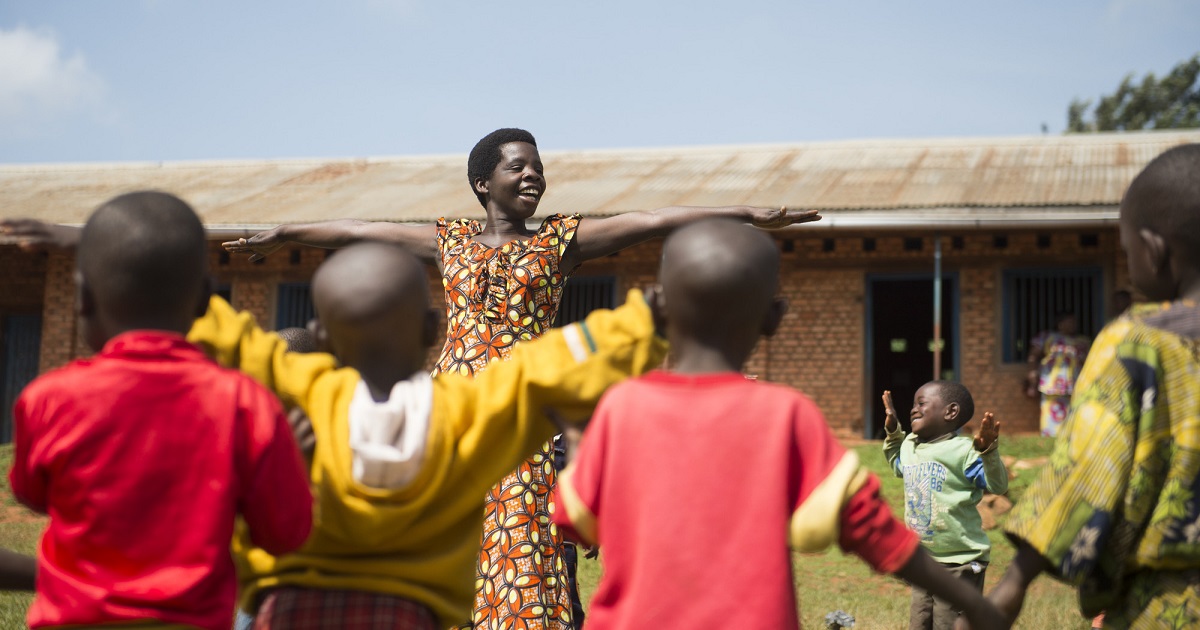 Feature photo: Acquiline Ndayishimiye leads her class in a game during recess at MCC-supported Hope School in Burundi in 2015. MCC photo/Matthew Lester

Editor’s note: This is the second in a series of five columns written by Ron Byler, Mennonite Central Committee U.S. executive director, to mark 100 years of MCC sharing God’s love and compassion for all.

“Bread, in God’s name, bread.” The cry for bread in southern Russia (present-day Ukraine) 100 years ago was for food. Mennonites in the United States and Canada responded, and MCC was born. Only months later, the food to southern Russia was followed by tractors. Today, Mennonite Central Committee’s (MCC’s) work on behalf of the churches in Canada and the United States continues through relief, development and peace extended in the name of Christ.

The work of development answers Jesus’ call in the Gospel of John to love one another as Jesus loves us. Development is the primary mode of MCC’s work today; of the $43 million MCC spent on its international programs last year, almost $27 million funded work related to health care, agriculture, water, education and more.

Most often, MCC’s work in relief, development and peacebuilding are interconnected. In 2018, I visited the villages of Fattellapur and Bamanpukur near India’s border with Bangladesh. A cyclone the year before and then a devastating flood had destroyed thousands of homes in these villages.

MCC was working with the Economic Rural Development Society (ERDS) on new housing for local families. And, with MCC’s help, ERDS was working with community leaders to break the cycle of poverty through education, microfinance, health and sanitation, water access and housing.

A young woman told me how she and the other young women in her class received bicycles, making it safer to travel to school. One mother said her family is now healthier because the new tube well means they no longer need to drink water from the pond. New toilets are constructed outside some of the new homes. Before, a woman told us, her children had more stomach problems and needed expensive medicine.

In a village meeting, the women discussed the new savings and loan program ERDS helped them develop. With their savings, some women began their own basket-weaving business.

MCC’s work with partner ERDS confirms a simple truth: When people are given the tools to make their lives better, they can thrive.

MCC’s work here also is an example of how MCC’s basic methodology has changed drastically in the last 25 years from direct programming to working through partners.

Sixty years ago, MCC began the Teachers Abroad Program (TAP) in response to calls from African churches and governments. In the movement for independence for many countries in Africa, TAP played a role in educating a generation of Africans for leadership in their own countries. Over two decades, MCC placed almost 800 teachers in more than two dozen countries through TAP.

MCC continues its work in education around the world today. In the Mutaho region of Burundi, the children of the marginalized Twa people were able to attend the MCC-supported Hope School. Some walked up to three hours to get there. The school significantly reduced the discrimination the Twa people faced in the majority Hutu and Tutsi community. Almost half of these children traditionally would not have received any education. On a visit in 2014, the principal of the school told me, “You are God’s footsteps. The hope we have is because of MCC.”

Hope is what MCC helps provide through its partners in a variety of sustainable community development efforts.

Near the village of Chiqui­chuqui, Colombia, through an MCC project I visited in 2017, the regional Mennonite Brethren (MB) churches are encouraging farmers to grow cacao, the source for cocoa and chocolate, rather than coca that produces cocaine. Farmers are participating in the project, even though they are taking the risk of crossing the armed groups that profit from illicit drugs.

Coca production would be more profitable in the short run, since it takes almost two years before cacao can be harvested. But farmers are persisting, and they are finally seeing their income increase. One farmer said he is now able to send his son to university. MB church leaders told us the churches have formed a foundation with MCC’s help to encourage farmers to grow rice and cacao instead of coca. The pastors said the quality of life is improving in their communities.

A continent away, in a very remote part of India on the edge of the dense Sunderban Forest, men and boys are losing their lives because as employment opportunities have declined, they have to venture into the forest, where Bengal tigers roam, to gather honey or cut wood.

Women who have lost their husbands to the tigers are called tiger widows and are ostra­cized by their communities. Many lack skills to become self-sufficient.

When I visited there in 2018, MCC was working with a partner, Society for Action on Rehabilitation Awareness Networking and Information (SARANI), to empower these marginalized women. In addition to other efforts, MCC provided funds for classroom sewing machines.

I sat in a bookkeeping class for women who have started home businesses. Many had learned sewing and garment-making skills and showed us clothing they had made. One woman told me her new sewing skills helped her earn enough to feed her children and send them to school. Several other women shared how they were able to earn enough money sewing to start other businesses.

SARANI leaders told us that other organizations like MCC have promised to provide some help for these communities, but when they see how remotely the villages are located, they politely say they cannot come.

“But you have come,” one of the village elders told us. “You have spent time with us.”

This is what I hear about MCC, not only in India, but in other countries around the world: You have come. You have spent time and partnered with us.

I am grateful for MCC’s supporters in the United States and Canada who for 100 years have made this ministry in the name of Christ possible. Together, we are loving others as Jesus loved us. Our century of development work together gives us hope to believe that when people have tools to make their own lives better, they can experience the fullness of life that God desires for all of us.