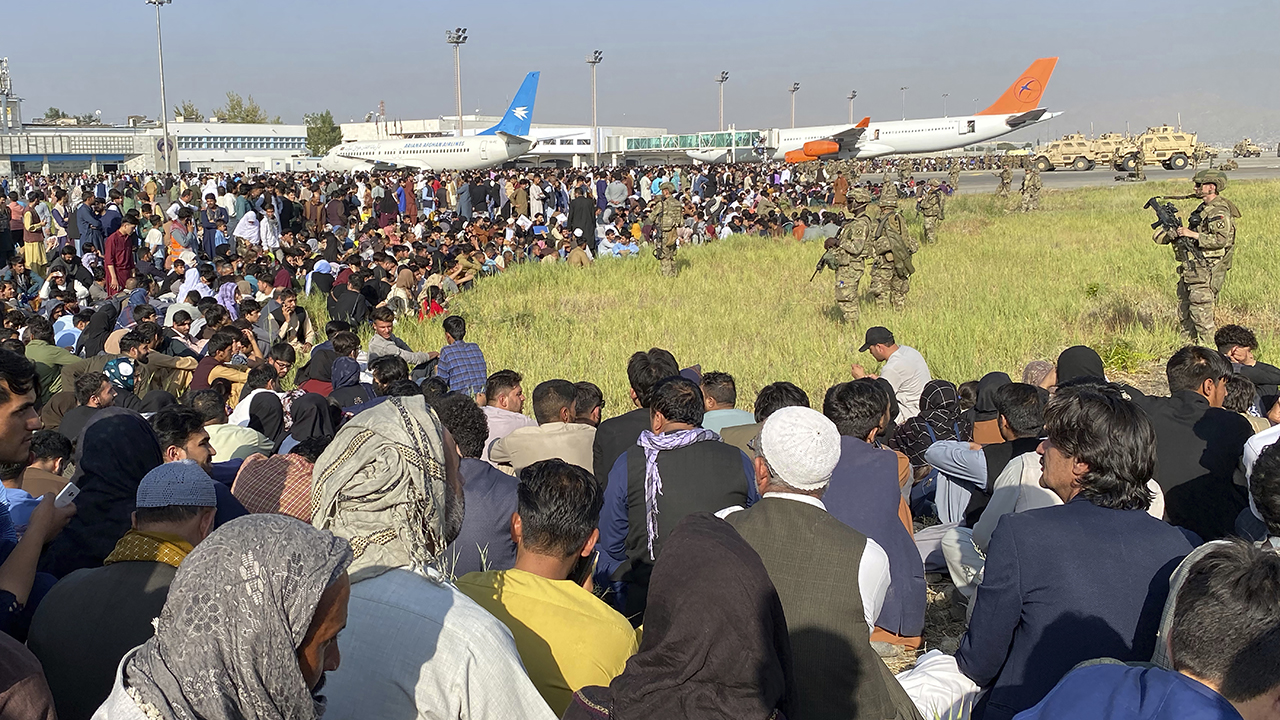 U.S. soldiers stand guard along the perimeter at the international airport in Kabul, Afghanistan, on Aug. 16. — Shekib Rahmani/AP

For the latest developments, see this Aug. 25 report. — Editor

As the Taliban solidifies its grip on Afghanistan, Mennonite Central Committee is concerned about its partner staff in that country.

Blaine Derstine and Rebecca Burkholder are MCC’s area directors for central, southern and northeast Asia, including Afghanistan. Speaking from their office in Thailand, the couple said all of MCC’s North American staff have left the country and staff from local partner groups that MCC works with are “taking a break” right now.

“They are optimistic they can reopen programs in a week or two,” Derstine said.

Early reports suggest the Taliban may allow them to resume programs, “but they say they will watch to see what really happens,” Burkholder said.

So far, the couple, who are from Lancaster, Pa., hasn’t heard any reports about attacks or harassment of partner staff since the Taliban took over the country.

While not wanting to be specific for security reasons, Derstine and Burkholder said the partner staff they have talked with are not asking to be evacuated.

“They are very committed to their work and have chosen to stay, Burkholder said. “Our hearts go out to them. We are extremely concerned for them and for the whole country.”

As for the future of MCC’s programs in that country, the organization will continue to monitor and assess the situation, said Laura Kalmar, who directs MCC communications in Canada.

MCC, which operates programs for women and girls in Afghanistan, along with literacy, health, education and peace programming, has provided $22 million U.S. in aid to that country since 2001. That includes a large grant from the Canadian government for maternal, newborn and child health.

MCC is one of many aid groups concerned about partners and programs in Afghanistan, said Nicolas Moyer, executive director of Cooperation Canada, an umbrella group for Canadian NGOs.

While most attention is focused on the safety of interpreters for the Canadian and U.S. militaries, aid groups — which did much of their work through Afghans they hired to operate Canadian-funded programs — are worried about their local staff, he said.

This would include those who managed aid programs and those who worked as interpreters, drivers, cooks, in administration or other ways.

“There’s been a very public effort to save the military interpreters, but much less attention has been given to local humanitarian workers,” he said. Aid groups have contacted the government to see how partner staff who want to escape can be helped.

Some of those people may be at risk for their involvement with Western aid groups, Moyer said, especially if they were involved in programs for women and girls, gender equality, human rights or sexual health.