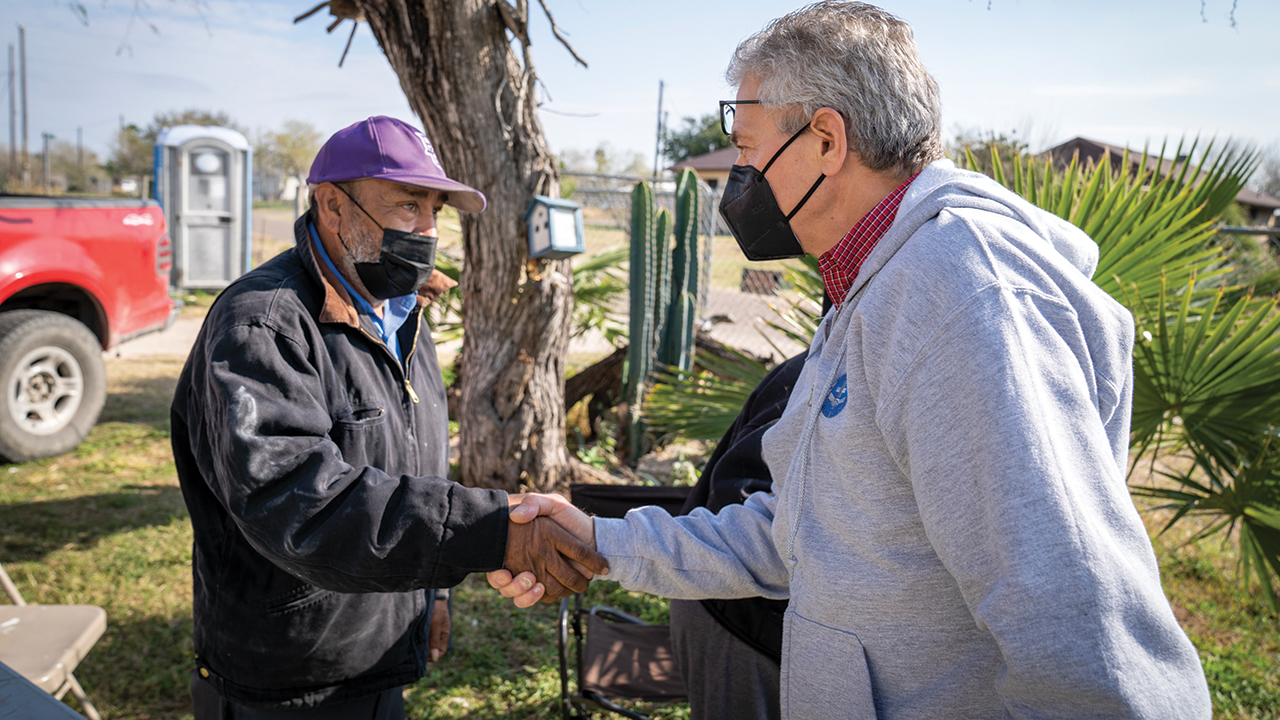 As Mennonite Disaster Service volunteers build homes in the Rio Grande Valley of Texas, they also learn about who they’re helping. At least half the residents in the colonias are U.S. citizens or otherwise legally in the country, and many are applying for asylum.

Each Wednesday afternoon of MDS service is dedicated to education on immigration and border issues. It is the first MDS site with this type of education component.

Neighborhoods called colonias bore the brunt of Rio Grande River flooding in 2018 and 2019. Recovery slowed to a crawl due to a lack of resources from Hidalgo County and the Federal Emergency Management Agency. The work was also delayed by pandemic restrictions that shut down the flow of winter Texans, who often volunteer.

The colonias frequently suffer from flooding due to poor storm drainage. There is a lack of well-paved roads and reliable septic, water and electric service.

Sisters Valetta Seymour and Wanda Knight came from Kansas to volunteer in February.

“It’s overwhelming,” she said. “When people would ask me to explain it, I couldn’t. But the speakers helped tell the stories of real people. I think it would be good to have these kinds of programs at more MDS projects.”

Seymour said she knew nothing about the colonias before the trip.

“These neighborhoods, because they are not within a municipality, are left without services we take for granted, such as trash pickup, police, road maintenance — and some don’t even have water or electricity,” she said.

“And we heard from a volunteer who is working tirelessly to help immigrants on either side of the border. She regularly crosses into Mexico to take a few supplies to the people living in dire circumstances in tent cities where they are waiting to be assessed for asylum hearings.”

Education sessions are led by local residents, including Mennonite Central Committee service workers, lawyers offering free legal aid to immigrants seeking asylum, and members of local churches. Volunteers learn what it’s like to be a person on the move. They learn about the forces of war, gang violence and persecution that prompt people to leave their home countries.

When volunteers sign up to serve in McAllen, they can opt out of the learning piece, but MDS project director Carl Dube said so far nobody has refused to participate.

“Volunteers seem to be willing and openminded,” he said. “We’ve had a couple of young people who said, ‘What border issues?’ They get their eyes and ears opened a little.”

Through storytelling and roleplaying, volunteers learn why people risk their lives to cross the border. Jennifer Harbury, a frequent speaker at the education program, often shares stories that leave people stunned, sad and angry — but also newly determined to help.

An attorney and activist, Harbury is a member of “Angry Tias and Abuelas” (Angry Aunts and Grandmothers), an organization that feeds the hungry, visits the imprisoned and comforts grieving people stranded by U.S immigration policy at the border.

“Why are people coming from South America and Central America?” Harbury asked. “Basically, what we’re seeing now are civilians fleeing north from an absolute horror show brought on by the death squads that are now drug lords.”

In addition to continuing work on homes through the rest of the year, MDS will be involved in building an administrative building and three dormitory buildings for La Posada Providencia.

Meanwhile, volunteers who serve in the Rio Grande Valley say their eyes are opened about who immigrants really are: neighbors in need.