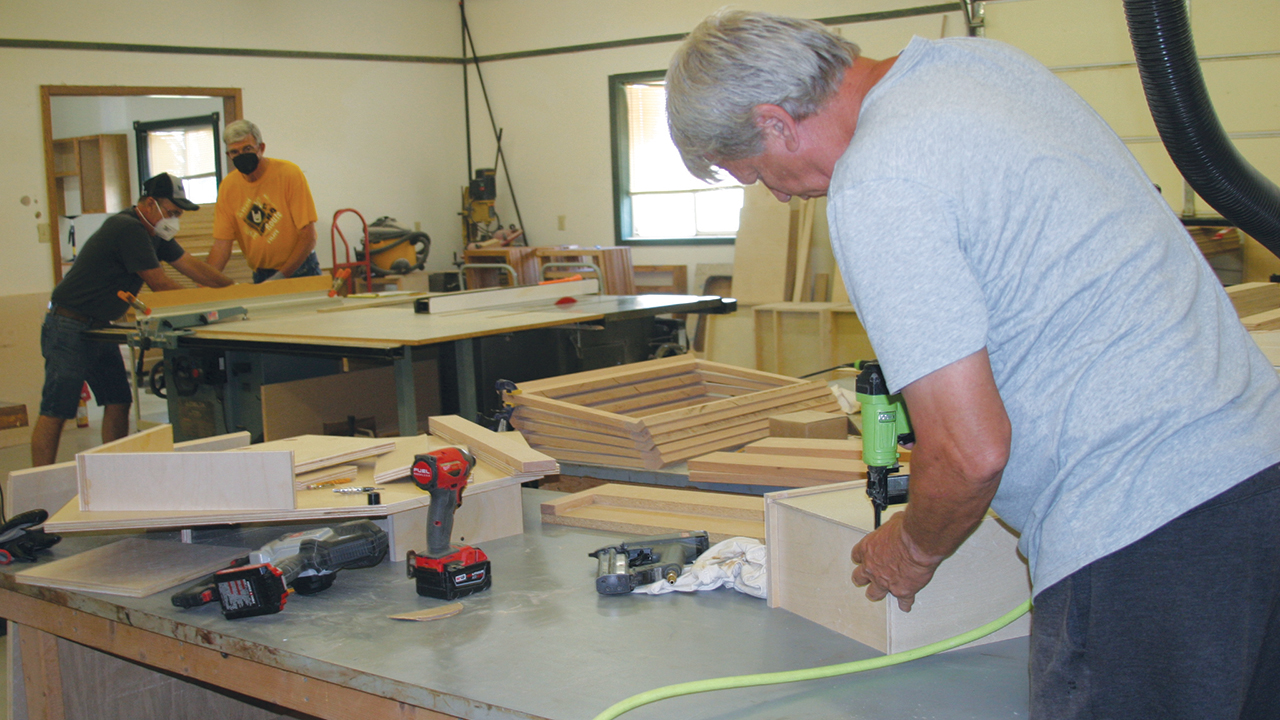 The goal of the newest Mennonite Disaster Service project site is to support every other project site.

Rather than a temporary response to a hurricane, flood or tornado, a new cabinet shop in Goessel, Kan., is ramping up capacity to fabricate kitchen cabinets for at least 50 new homes a year.

The mini factory started operation in June and should realize significant savings for MDS while giving volunteers in Kansas a local, year-round location to serve.

MDS has a handful of standardized house plans using two kitchens that only differ by 12 inches of cabinetry. Those cabinets tend to be purchased locally at big-box home improvement stores.

As volunteers ran boards through a table saw and assembled units July 6, MDS central U.S. regional operations coordinator Jeff Koller gestured to a set of display cabinets missing only the kitchen sink installed in one corner.

“The general idea is to build five sets of cabinets complete so a trailer is always ready to go and the pieces are ready to go for the next set,” Koller said. He noted processes should get streamlined over the coming year with potential to increase production to around 75 sets a year.

“We know our fixed costs here over 50 sets, and we’ll deliver these at the cost of $600 for a custom, solid-wood set,” Koller said. “That’s all hardwood. No particleboard.”

Construction costs have been rising everywhere. Homes that used to cost $45,000 for MDS to construct are now in the mid-$60,000 range for materials.

A permanent specialized shop did not develop from an organizational strategy to save money.

Rod Abrahams of Goessel, who had been building cabinets at his business, Creative Wood, since 1999, was thinking about selling the shop. Meanwhile, Kansas unit chair Cleo Koop was struggling to energize local volunteers, since not everyone is interested in traveling to a distant work site.

“We’d been struggling as a Kansas unit with an inheritance,” said Koop, the shop’s project director. “We weren’t sure what to do with it. In November the Kansas unit put in a chunk of money for this.”

After conversations with Abrahams, the tools were included as well. A bookkeeping office and restroom were added. An addition on the back expanded capacity for staining and sealing, along with storing raw materials.

“With the building and tools all here, we just had to figure out how to do the cabinets,” said Abrahams, who has been volunteering as shop manager to get the system running.

Koller and Koop said interest has been high. They compare the operation to a sewing circle with sawdust. Koller said he got the names of 12 interested people in 10 minutes between worship and Sunday school at Eden Mennonite Church in Moundridge on the first Sunday he started looking for volunteers.

“This model of engaging local volunteers exists everywhere,” he said. He sees potential for other MDS regions to develop shops for roofing trusses, rafters or other building components.

But savings don’t just come from volunteer labor and cutting out the big-box middlemen.

The plywood, which can sell for $100 a sheet, was turned over to the Federal Emergency Management Agency, which in turn allowed disaster response organizations to apply for allotments. Two truckloads worth about $120,000 will supply the cabinet shop for three years at the planned production rates.

As the table saw whined, Koller got a notification on his phone. A semi-truck was being loaded with free plywood, headed for Goessel.