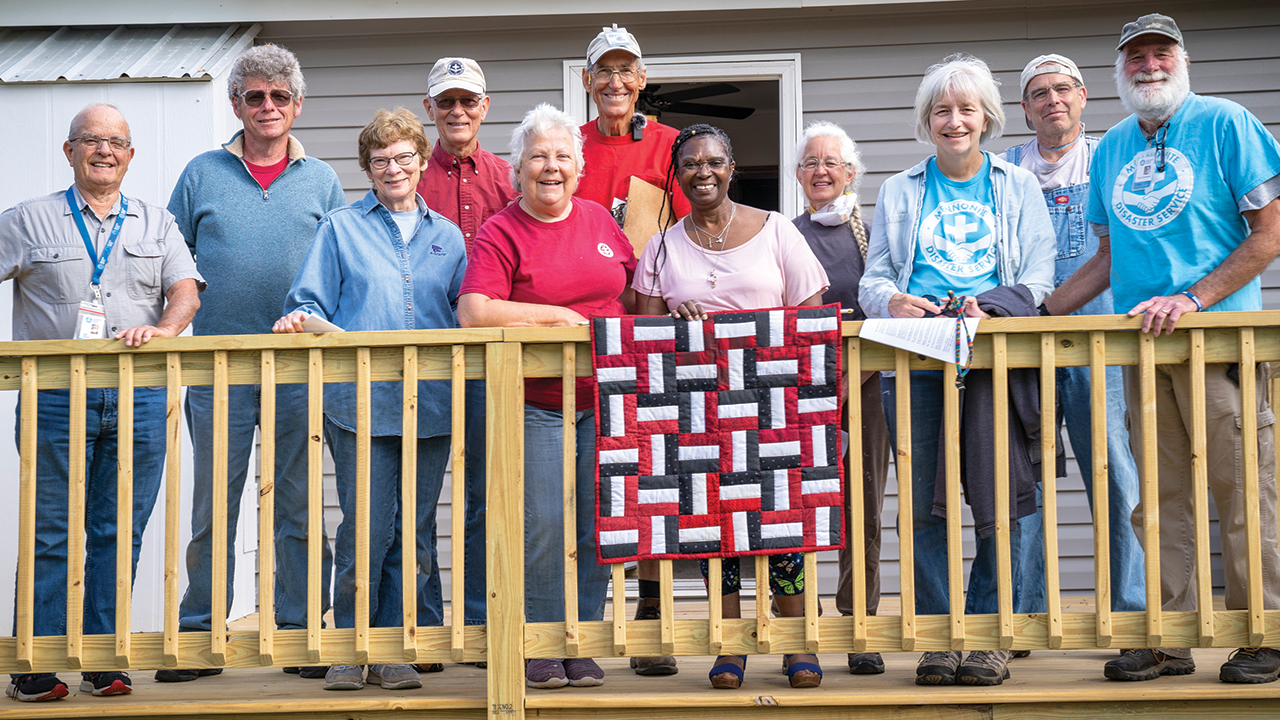 Cynthia Williams and Mennonite Disaster Service volunteers celebrate the dedication of her home in April in Marianna, Fla. Below: MDS volunteers Millie Hershey, right, of Lancaster, Pa., and Ed Basinger of Hesston, Kan., work on a house. — Paul Hunt/MDS

Mennonite Disaster Service dedicated the last of 43 new and repaired homes March 30 in Marianna, Fla., after three and a half years of work in the Florida Panhandle community.

Over that time, 1,619 MDS volunteers worked 15,350 days, building new homes and repairing damaged ones — and touching the lives of hundreds.

Cynthia Williams, whose home was dedicated at the April event, told MDS volunteers she was grateful for them all.

“I prayed for so, so long for this,” she said. “I just want to say thank you from the bottom of my heart.”

MDS first offered an early response, then a long-term one, in the wake of Hurricane Michael, which made landfall near Mexico Beach, Fla., on Oct. 10, 2018, as a Category 5 hurricane with sustained winds of 160 mph.

By the time it reached Marianna, 50 miles from the coast, it was a Category 3 hurricane. It was the third-most intense Atlantic hurricane to make landfall in the contiguous United States, causing at least $14.5 billion in damage.

MDS worked with the North Florida Inland Long Term Recovery Group, which was created to respond to needs in Jackson and Calhoun counties.

“When MDS comes in and stakes their flag, then other groups come in, too, giving us a lot of credibility,” said Kristi Terry, the group’s director.

“They bring answers to the prayers of homeowners; they bring inspiration and dedication day after day; they bring gifts of handmade cutting boards and wall hangings, and they bring a listening spirit,” she said.

“Hurricane Michael turned our people inward to focus on ourselves and our personal needs,” he said. “MDS helped us focus and do the work outwards. Many of our congregants have a newfound faith in the Lord.”