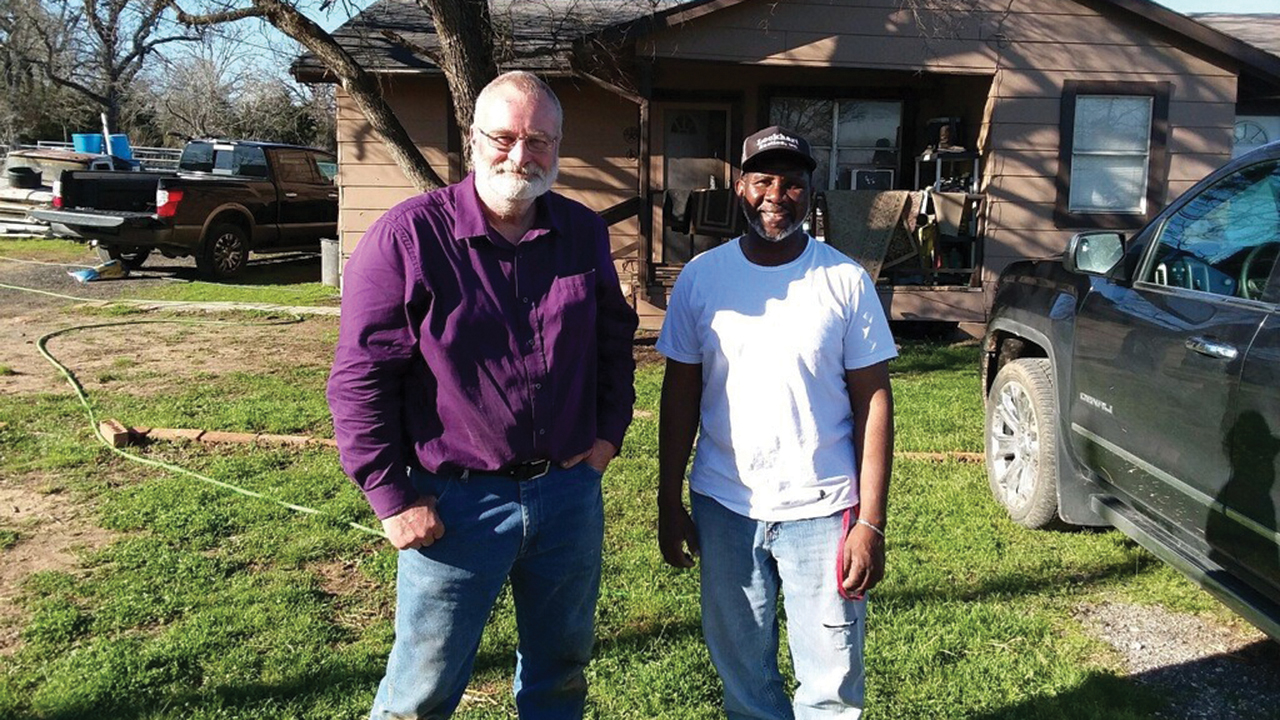 The two live in a mobile home.

“The only water they’ve had for 19 days is a garden hose coming through the window,” Ensz said. “We’re just hoping we can get a toilet and sink back running for them.”

Serving with Mennonite Disaster Service, the two men drove from Beatrice, Neb., where they both attend First Mennonite Church. They answered a call for volunteers experienced in plumbing who could help some of the thousands of people in Texas still without water in the wake of a winter storm that struck in mid- February.

The storm sent some 29 million people into a state of crisis. Power outages led to burst pipes flooding thousands of homes.

Ensz and Casey helped more than a dozen homeowners get their water working again. Most of these repair jobs involved wedging themselves into the crawl spaces under trailer homes, turning the water on and watching for leaks.

“Last night, under one trailer home, we counted up nine breaks,” Ensz said.

As they fixed the pipes, they used replacements less likely to break during a future freeze. And, Casey said, “we’ve had lots of very happy people.”

The homeowners they met — all referred to MDS by the Bastrop Long Term Recovery Committee — had no hope of fixing the plumbing themselves.

Ensz described spending nearly an entire day underneath one doublewide mobile home: “There’s a lot of dust and critters under there,” he said.

When they were finally able to turn the water on, “we heard a scream from inside the house, so we turned the water back off and ran up there to see what was going on. It turned out that the lady was screaming with joy because she was able to turn her shower on — and it worked!”

Another young man Ensz described as a go-getter wanted to fix his plumbing but had neither the materials nor the experience. “We were able to give him some pipe fittings and walk him through the repair,” Ensz said.

As they worked, Ensz and Casey carefully followed MDS COVID-19 safety protocols. “We wore a mask whenever we approached people,” Casey said.

Ensz has received the first of a two-dose COVID-19 vaccine. “I wouldn’t have come if I hadn’t had that shot,” he said.

Both Ensz and Casey said helping people in Texas made them feel closer to their neighbors in another state.

“You just want to get them water,” Casey said.

Ensz added: “They say that sometimes you’re more blessed than the people you bless. This is one of those times.”

MDS is anticipating a long-term response in Texas. Volunteers will work in the Gulf Coast counties of Victoria, Nueces, Hidalgo and Aransas, as well as in Bastrop County. They will also help residents in the San Antonio and Houston areas.

“MDS is still responding to needs in Texas related to Hurricane Harvey, which struck in 2017,” said executive director Kevin King. “Please pray for those in dire circumstances from this winter storm, as well as those who are still facing pain and trauma left by other disasters.”

Interested volunteers from the U.S. should contact Deanna Frey at 800-241-8111 or register at mds.volunteermatrix.com. Canadians cannot volunteer due to border restrictions.