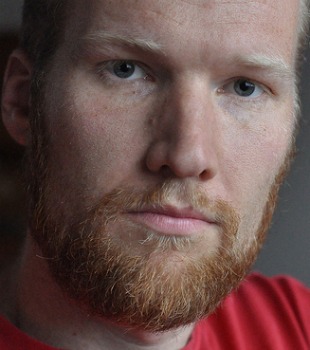 Conventions are where we in Mennonite Church USA go to wrestle with who we are. Traditionally that happens in the delegate assembly, where resolutions are passed and changes are made to church documents. However, over the last 12 years I’ve seen how it happens in other, less formal ways, which are a big part of what draw me to this biennial gathering.

Shaping our collective identity at convention is a contested project in many ways. Starting in 2009, Pink Menno has shown up with the clear message that LGBTQ folks can no longer be ignored by church institutions. After 10 years of hymn sings and disruptive actions, we saw small but clear steps this year. In the delegate session on Friday afternoon, denominational staff member Michael Danner recounted his consultation with Pink Menno (along with Inclusive Pastors and Brethren Mennonite Council on LGBT Interests) on a process around changes to the MC USA Membership Guidelines. He also committed to continuing consultation with us. We have gone from pariah to partner.

Similar shifts are happening in my work with the Dismantling the Doctrine of Discovery Coalition. Four years ago, the first time we had a booth at a Mennonite convention, very few people had heard of the Doctrine of Discovery. Now we have visitors stopping by our booth who have hosted one of our speakers, presentations or shows. They are asking how to go deeper and take the next step. In February a retired Mennonite minister in Kansas modeled one approach toward reparations by giving $10,000 to the Kaw nation as part of a land sale.

Another important area of change is how the Mennonite Church USA convention has adapted to make sure there are other perspectives beyond white Mennonites reflected in the content and structure of convention. In Phoenix in 2013 I participated in an anti-racism team organized by Iris de León-Hartshorn. This team presented its observations in a plenary session at the end of the week. Teams like this help model the ways a community can invite critical perspective and respond to them in non-defensive ways. This year in Kansas City there was a strong presence of non-white folks from the stage in worship and other leadership roles. This is part of a long-term trend.

The work of pushing our church itself to change is at the heart of Anabaptism for me. As I’ve written elsewhere, the transformationist stream of our tradition challenges the power structures both in the wider world and in our own church. We see our model in Jesus’ challenge to the Roman authorities and religious leaders of his day culminating in his cleansing of the temple and crucifixion.

For me, participating in the evolution of the church at convention strengthens my sense of connection with the wider Mennonite church. In our individualistic culture, it is critical that we shape our imaginations around collective values and lifeways led by the spirit. Conventions are a space for cross-pollination and connection. In the exhibit hall, workshops and worship gatherings we hear new ideas and the spirit moves us.

Mennonite conventions are a site of contesting our collective future, connecting our current paths and cross pollinating our present. May our web of relationships continue to grow.

Tim Nafziger is a Mennonite writer and web developer who lives with his wife Charletta in the Ventura River watershed on the traditional lands of the Chumash people.