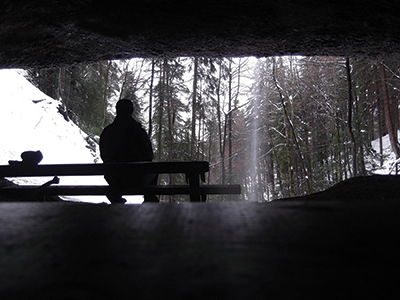 During a wintry trip to Switzerland, my friend Erik and I decided to take the train southeast out of Zurich, hop a bus to the end of its route, then walk a few miles into the foothills of the Alps to our destination, a 16th-century Anabaptist cave.

Our journey connected us with a story Erik and I had learned from the Mennonite community in southeastern Pennsylvania where we grew up.

Pastors, historians, choir directors and others in our church community helped us to feel part of a Christian story that had a formative experience hiding from Swiss religious or political authorities in the 16th century.

Snow forced us to take the circuitous route along a plowed street instead of the more direct path up a steep rolling hill.

When we finally found a sign providing directions to the cave, snow obscurred the path. We ended up walking aimlessly in the opposite direction of the cave for a couple of hours, and our hiking took us further from our destination.

In a 16th-century version of our hike, we would have attempted to avoid Täuferjäger (Anabaptist hunters), securing both the countryside and a particular version of Christian thinking from insurgents.

In Switzerland, the Anabaptist movement started as an offshoot of the leadership of Ulrich Zwingli, who rejected the Roman Catholic Church for its unbiblical practices but continued to use the power of the state to regulate what distinguishes “good Christianity” from “bad Christianity.” Conrad Grebel and other reformers refused the state’s wishes and broke the law with their biblical theology.

Both Zwingli and Grebel used the Bible to back their claims, even some of the same verses, but the difference between the two came down (in at least one moment) to a question of who could or who could not be included around the table to discuss interpretations of Scripture.

1 Corinthians 14, the “rule of Paul,” became an important passage for both Zwingli and the Anabaptists who countered his claims. Paul wrote to a community in Corinth that was divided between Jewish and Greek cultures and disagreed about how the Christian community should live together.

Despite Jewish restrictions on eating with those who didn’t follow dietary law and the Greek acceptance of speaking in tongues, Paul instructed the church in Corinth to hold a meeting together where everyone who has something to say, given to them by the Holy Spirit, should be allowed to speak.

Zwingli cited this passage as a way to open up the discussion of scriptural interpretation to him and his reformers. However, contradicting the openness of the rule of Paul, Zwingli didn’t include the voices of Grebel and his colleagues. As a result, Anabaptists cited this passage as a criticism of the reforms underway in Zurich.

We knew we were lost in the woods when we realized we were walking away from the Alpine foothills rather than into them.

That’s when we met Jan, a 70-year old stereotype of Alpine life who plays the Alpine horn, uses wood skis to travel up hills and was jogging through a foot of snow. Jan not only directed us to the cave but invited us after our hike to visit a farmhouse where friends of his gathered for dinner.

This felt like a God moment. In our time of faithful yet aimless wandering, God sent us a guide.

If there was anything special about the cave upon approaching it, it was how camouflaged it was in the steep hillside where it sat. The crisp air and the shadowy images our cameras captured in the evening light served as good memories of our trip.

The pictures didn’t turn out as planned, but they helped remind me I was part of a broader story.

Instead of clear images of our relieved faces finally at our destination, the images we captured that day were in silhouette, mere outlines of our bodies sitting in the caves.

These images constructed our identities as indistinguishable from the lives of the Anabaptist reformers fleeing from their caves. We were just shadows, outlines of Anabaptists in the rifted rock.

In this way the images function to collapse time between the restive moment in the cave’s protective shadow that I experienced and the more dangerous experience Anabaptist reformers had centuries earlier. As the shadows blended our identities with the reformers, Erik and I ritually reaffirmed our identity as part of the Anabaptist-Mennonite story.

Leaving the cave, we decided to visit the Swiss family’s farmhouse Jan invited us to. A gregarious Swiss mother instructed her children to take our soaked shoes, stuff them with newspaper and place them by the fire. They fed us cheese, meats, bread and cherry water.

We felt warm after our travels and secure despite the strange surroundings. The family even helped us procure local cheese and drove us back to the train station so that we could return safely to Zurich, where our journey had begun that day.

We in Mennonite Church USA live in the legacy of the Anabaptist emphasis on welcoming everyone around the table. That is one of the major biblical criticisms made against the theological changes happening in Zurich.

Today conferences face questions about who should and should not be allowed at the table. In this time we should be reminded that our church has never been able to determine once-and-for-all the proper beliefs we should hold.

But that isn’t the measure of what makes the church a good church. The church that Paul wrote to in Corinth didn’t have everything sorted out, but it was nevertheless a good church if it followed certain procedures. One of those procedures was that everyone should have a voice at the meeting.

Following from this, all that we need to do as a church today is continue fellowshiping together.

Anyone who sees their identity in the shadow of the cave, anyone willing to turn themselves over to the Anabaptist-Mennonite story, should join the discussing table.

And it is then that we will be the church.

Jason R. Moyer is assistant professor of communication arts at Malone University in Canton, Ohio, and a board member of The Mennonite, Inc.