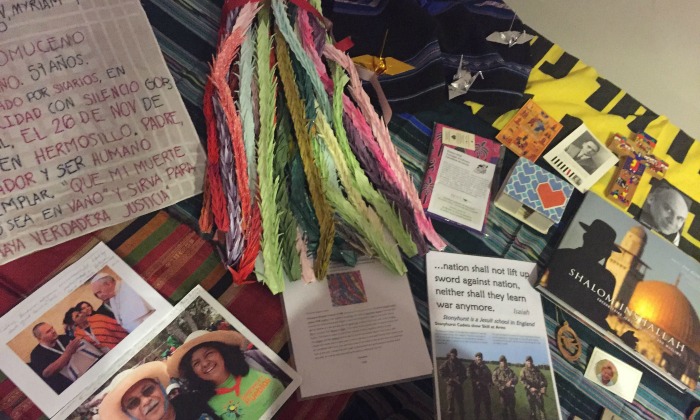 Photo: A variety of peace symbols from around the world at the prayer table at the Nonviolence and Just Peace conference, April 2016. Photo provided by Pax Christi International.

The 15th annual Bridgefolk conference was held July 28-31 at Saint Benedict’s Monastery and the College of Saint Benedict in Saint Joseph, Minnesota. The conference proceeded under the theme, “‘I Desire Mercy:’ Practicing the Works of Mercy.”

Bridgefolk is a grassroots movement of sacramentally-minded Mennonites and peace-minded Roman Catholics who come together to celebrate each other’s traditions, explore each other’s practices, and honor each other’s contribution to the mission of Christ’s Church.

Previous conferences have alternated between Catholic and Mennonite locations in the United States and Canada. Of the 45 participants gathered for this year’s conference, about 30 were Mennonite and 15 Catholic.

On the opening evening of the conference, following welcoming words from Sister Michaela Hedican, Order of Saint Benedict (Prioress of Saint Benedict’s Monastery), this year’s conference featured Father Columba Stewart, OSB¸ a distinguished scholar of early Church history, especially the evolution of early monastic and other forms of intentional community. Father Columba spoke of how asceticism was linked to the practice of the spiritual and corporal works of mercy.  It was understood that individuals who had received and embraced the mercy and love of God in Christ worked enough to make a living but other means were meant to be shared with the needy.  There was no sharp division between giving someone food or a place to sleep and sharing a word of wisdom after careful listening.

Because there is no division in the way Mennonites and Catholics approach the spiritual and practical works of mercy, the conference planners (Andy Martin, Sister Theresa Schumacher, OSB, Brother Aelred Senna, OSB, and Abbot John Klassen, OSB) developed a set of paired readings from Scripture and teachers and pastors across the centuries from both Catholic and Mennonite sources, as well as some contemporary reflections. These narratives were read out loud, reflected on, and then discussed through the course of a morning. The planners created a resource booklet which contains all of these readings, other Scripture citations which refer to God’s mercy, our accountability for the practical and spiritual works of mercy, and additional sources from the tradition.

Opportunities for doing the practical works of mercy and seeing a spiritual director (on a limited basis) were integrated into the conference.

Mennonite author Dawn Ruth Nelson gave a presentation on her experience as a member of a small Mennonite community living in Dublin from 1979-1991, while working as a peacebuilder. Nelson spoke in a compelling way of the difficulties encountered in being Mennonite in an overwhelmingly Catholic country, where Roman Catholicism was really the “state” religion.  Unemployment in Dublin was at 50% in the early 1980s, which only increased the energy and availability for violence.

“We had this huge vision of what we were trying to do, to help people understand alternatives to violence. But we weren’t equipped spiritually and emotionally to carry out that vision in a sustainable way.”

Nelson spoke of the need to deepen her prayer life and to seek times and places of spiritual renewal.  Once, while on retreat, she was asked to walk from the retreat house to a bay on the edge of the property. She left us with the image of a flock of hundreds of birds in Dublin Bay, having a huge feast, and flying about, freely, gracefully, trustingly. For her this became a life-giving image of God’s care for her and the creation. (Mt 6)

Finally, the conference heard from a group of panelists, each of whom has dedicated herself to a specific “practice of mercy”: Josue Behnen, OSB, Discernment and Spiritual Companioning; Eunice Antony, OSB, Ministry to LGBTQ men and women; Jean Jeunemann, OSB, Habitat for Humanity; Margie Pfeil and Biff Weidmann, Catholic Worker House. The panel was an acknowledgement of the life-giving expression of the works of mercy by religious women.

Adam Tice, a widely-published Mennonite hymn writer, and Sister Theresa Schumacher, accompanied by Eleanor Kreider, led common worship which was woven throughout the conference in several forms, including morning prayer.  After full mornings of listening and discussion, the participants engaged in centering prayer at midday.

Brother Aelred Senna and Sister Theresa Schumacher led the gathered community in a hymn sing, which has become a well-loved feature of Bridgefolk gatherings. This year’s hymn sing again featured a litany of the faithful, composed by Brother Aelred, which drew names from the “cloud of witnesses” of both Anabaptist and Catholic traditions.

Central to this year’s conference and all Bridgefolk gatherings was the footwashing and Agape meal, using a liturgical frame that was developed by Rev. Prof. Mary Schertz (Anabaptist Mennonite Biblical Seminary, Elkhart, Indiana) and Abbot John Klassen, OSB (Saint John’s Abbey), drawing on ancient liturgical forms and a current practice shared by Mennonites and Catholics.

For Bridgefolk, footwashing has become a poignant ritual of celebrating our baptismal identity and unity of discipleship and service in Christ at this time when full Eucharistic communion is still not possible.  Through foot washing, the hymn sing, and the litany of the faithful, Bridgefolk is creating transformed rituals that express what we hold in common.  A fundamental element of Bridgefolk’s mission that is emerging is to retrieve and celebrate elements of unity in fresh and inviting ways.

The 16th annual Bridgefolk conference is planned for July 27-30, 2017, to be held at the School of Theology at Seattle University and Seattle Mennonite Church, the alma mater and home congregation, respectively, of Marilyn Stahl, Mennonite co-chair of Bridgefolk and Mennonite Church USA representative to Bridgefolk.