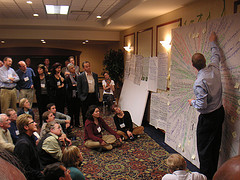 This week I spent three days in Winnipeg, Manitoba as part of Mennonite Central Committee’s New Wine New Wineskins process. Wine, you might ask? What are Mennonites doing talking about booze? Well, it turns out that Jesus used alcoholic metaphors in his teaching (see Matthew 9:17 for the story). For MCC, this means bringing together the constituency of MCC (especially those on the growing edges) to revision new structures and programs together.

One of my fears going into the weekend was that I’d see a lot of familiar faces: lots of Swiss-German/Dutch folks like me. As we sat down for our opening meal together, I was very happy to see that I was wrong. Only 62 percent of those gathered were white. I recognized a few people, but not nearly as many as I expected. The group also had a good gender balance and I was happy to see a good smattering of people in my age range. I had a sense that MCC put undoing racism and sexism at the center of this discernment process. 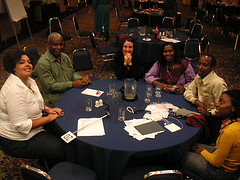 The gathering was structured around table groups of eight people eac. The tables groups were created in such a way as to put people who didn’t know each other together. These groups would be our partners for the next two days both in discussion and decision making. Throughout our time together, these tables were the basic unit for passing our ideas to the whole group and MCC.

I should mention that this whole process used Appreciative Inquiry, a process for organizational change that builds on strengths rather then focusing on weaknesses. This meant that we didn’t spend any time listening to complaints or critiques of MCC. That doesn’t mean these perspective were suppressed, rather these energies were focused on dreaming an alternative vision together. It was quite refreshing for me after spending quite a bit of time with processes focused on weaknesses in organizations. 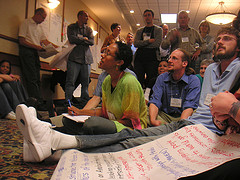 The first evening we started out by interviewing someone from our table who was least like us. I interviewed a Canadian woman in her 70s whose parents immigrated from Russia. It was a very enjoyable two hours of stories and sharing. We discussed our positive experiences of MCC, the strengths we see in the current organization and our dreams for MCC in 2028. Rather than representing our own interests, over the next two days we shared our interview partners thoughts as we went through the discovery, dreaming and design steps of the process. I found this worked about two thirds of the time at our table and it was a very useful tool for making sure all voices were heard.

One of the fun parts of the process was the space it created for non-verbal and written expressions. Twice during the two days we were given over an hour to create skits, dances, poems, songs or other visual representations of our table’s proposal. We also made liberal use of pipe cleaners, construction paper and clay.

As is the case in most gatherings I go to, the highlight for me was the new people I met and the relationships I formed. I felt a strong sense of shared values and ideas with people I talked with, regardless of background.

The ideas generated by the process were extremely wide ranging. One of the themes that emerged was the idea of national MCC’s in countries outside the US and Canada. These national bodies would be empowered to do local advocacy and also to help one another without going through the US and Canadian bodies. Some of the programatic themes were peace building, immigration, the situation in the Congo and HIV/AIDS. 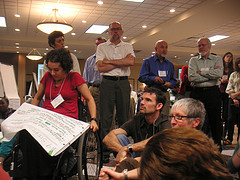 The good news is that the process isn’t over. You can join in yourself by going to the MCC New Wine New Wineskins page and finding a regional gathering near you. They are happening all over North American in the coming months. The conclusions of the process won’t come until June of next year. While the process itself was engaging and important, the really important work will come after that as MCC’s sets about pouring itself into the new wine skins and starting the fermentation process all over again. 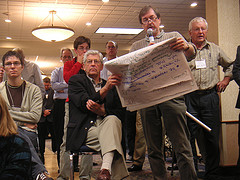