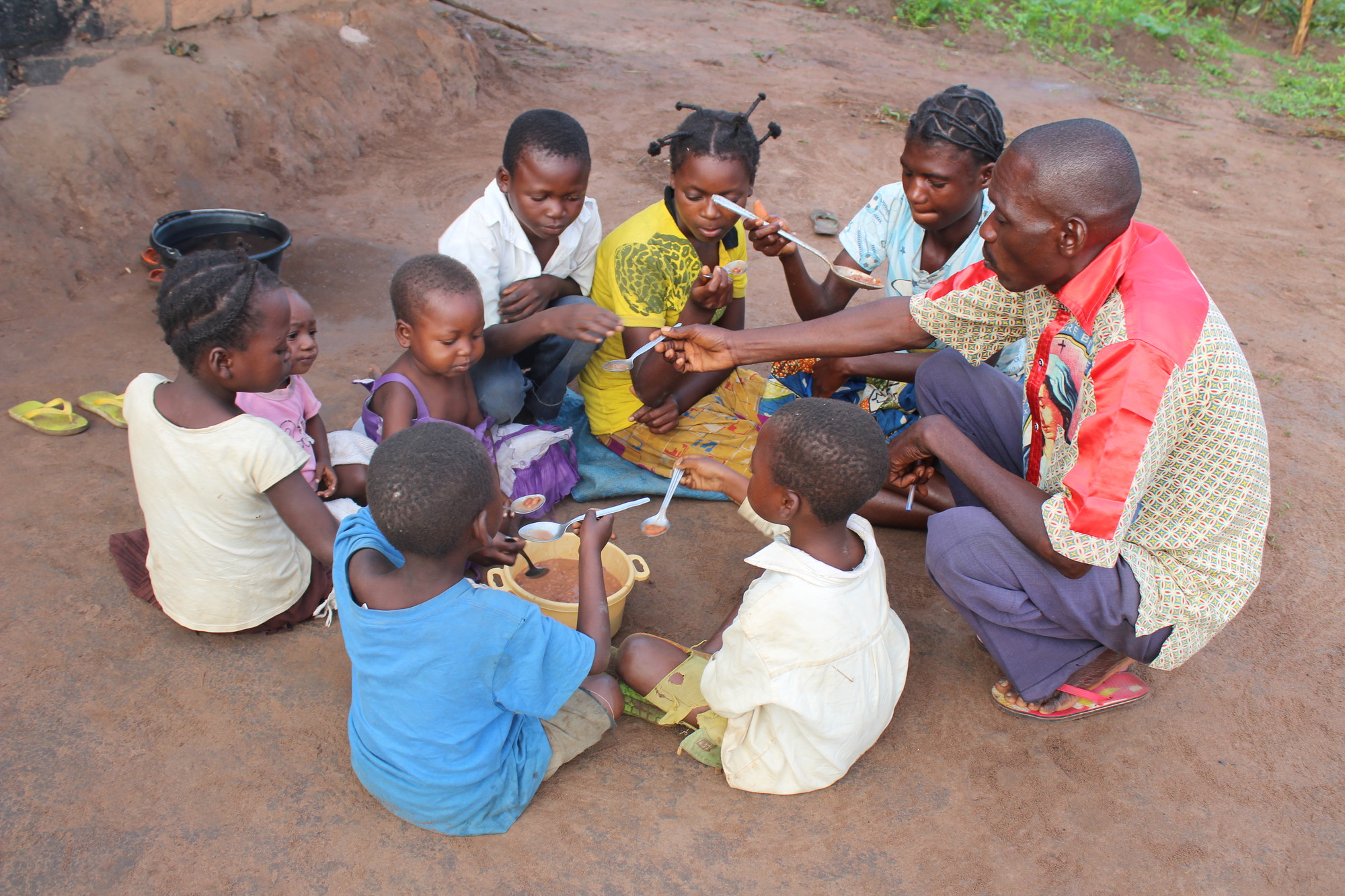 Photo: Agnès Ntumba (wearing a light blue shirt on the right) and her family share a pot of beans Ntumba made from supplies that were part of a food distribution she received earlier that day. MCC photo/Mulanda Jimmy Juma

Agnès Ntumba remembers the day her husband and seven children fled the violence that took over their village in the Kasai region of the Democratic Republic of the Congo.

“I saw people being killed. They were coming to kill us, and we had to escape,” Ntumba said.

About one year ago, her village of Tshilundu Ndibunu had become the next place among many to be terrorized by ethnic and political violence. The fighting, which began in August 2016 when local militia group Kamuina Nsapu and national security forces clashed, incited ongoing battles in the Kasai region.

The crisis has forced 1.4 million people from their homes, including 5,000 Mennonites.

Together with her family and others from the village, Ntumba ran for the bush where they walked two days to reach safety. Now her family is staying in the Kabwela area of Lomami Province with a host family because there are no formal camps for displaced people. With the additional nine from Ntumba’s family, 20 people live together.

“We eat once a day. It is not enough,” Ntumba said in February, when she spoke with MCC representative Mulanda Jimmy Juma. “We are suffering,” she said, speaking not just of her family but of the many displaced people in Kabwela.

Mennonites in Congo are responding to the suffering of displaced people there and in the cities of Kikwit and Tshikapa this spring by distributing food packages of flour, beans, oil and salt that will feed 4,000 people, or 830 households, for three months. They also have begun to distribute 1,000 dignity kits to girls and women, and 100 children in Kabwela have received school supplies.

Three Congolese Mennonite denominations are working in partnership with Mennonite Central Committee to organize and carry out the distributions, with supplies funded by the Canadian Foodgrains Bank, MCC and numerous Anabaptist organizations around the world.

Communauté Evangélique Mennonite (Evangelical Mennonite Church) carried out the first of the three distributions to 180 households March 23-24 in Kabwela.

Ntumba and her family were among the recipients. She received food in the morning, and her family was sitting in a circle, sharing a pot of beans that very afternoon, Juma said. Most families haven’t eaten beans in a while, so they cooked them instead of making the more common bedia, a thick porridge made of maize flour, he said.

“We are going to change how many times to eat,” Ntumba said in a focus group that met to evaluate the distribution. “We will be eating in the morning and evening too. Before, we were eating once a day. We believe that our life will change with this aid.”

According to Juma, many displaced families have never received assistance from humanitarian organizations and depend on other vulnerable people to survive.

“This support is important because it helps to reduce exploitation and tension in the local communities. Having food gives dignity to displaced people,” Juma said. Without food, displaced people sometimes are forced to work in the fields all day for less than 25 cents, and they endure insults and mistreatment, which lead to disputes, he said.

On April 3 supplies for the next distributions were on the ground in Kikwit and Tshikapa, where 10-year-old Kanku Ngalume is staying. In February, he told Juma, through tears, that he fled from his village when his parents and siblings were all beheaded.

He followed a group of people who were all running for their lives and ended up in Tshikapa.

“I am alone here. Mama Agnes (another displaced person) is the one taking care of me. If she has food, we eat. If she doesn’t have, we don’t eat. We eat only once a day in the evening,” Ngalume said.

The spring distributions were preceded by a November 2017 initiative, in which CMCo and CEFMC gave 460 households food assistance and shelter supplies. MCC and other global Anabaptist organizations also financed that distribution.

Ongoing donations to mcc.org/congo-relief are needed, as the Congolese denominations move forward with plans to address educational needs of the displaced children, including school fees, school supplies and uniforms. MCC also is providing denominations with training in trauma healing and humanitarian practice.