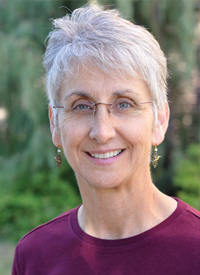 Joetta Handrich Schlabach is Co-pastor for Worship, Pastoral Care and Administration at Faith Mennonite Church, Minneapolis, Minnesota. She lives on the “bi-ecclesial bridge” with her Mennonite-Catholic husband, Gerald Schlabach. They recently celebrated 35 years of marriage and agree that “One of us is usually right.” This sermon was presented at the Footwashing Liturgy and Agape Meal at the Annual Mennonite-Catholic Bridgefolk Conference at St. Benedict Monastery, St. Joseph, Minnesota. The theme of the conference was “I desire mercy: Practicing the Works of Mercy.”

Highways can be dangerous places. I grew up in the Upper Peninsula of Michigan where highways were snow- and sometime ice-covered-for up to five months of the year. I have memories of being in cars that landed in a snow bank in both clear and stormy weather. During the five years that my husband and I lived in Central America, we had our share of breathtaking moments when the bus we were riding in decided to pass on a curve along a mountain road or when we were riding in the back of a pick-up at high speed.

But I’ve never been fearful that a highway encounter with the police might be dangerous. Thankfully, those encounters have been few in my life, but I am increasingly coming to understand that my sense of safety is not simply a matter of always following the speed limit, but also has to do with the color of my skin. I’ve also come to know that the highway that I get on each day, I-94, which many of you may have driven on to come to this gathering, endangered a whole neighborhood in its very creation, as it bored through the heart of St. Paul’s African-American Rondo neighborhood in the 1960’s.

Last month the nation—and many parts of the world—have become familiar with the name of Philando Castile. Philando was the young man shot by a policeman during a “routine” traffic stop in Falcon Heights, just north of St. Paul, Minnesota. Philando graduated from a St. Paul high school located two miles from our home and he worked in the cafeteria of a St. Paul elementary school a mile away, a school attended by children in our neighborhood.

I have experienced Falcon Heights as a quiet, northern suburb. I took one of our sons there on a weekly basis for cello lessons when he was in high school. But since Philando’s death I’ve learned that for African Americans it is known as the “borderlands”—one of the suburban areas where black people aren’t “expected” to be. So they get stopped with greater frequency, whether or not they have a broken taillight. In fact, Philando, just 32 years old, had been stopped 46 times in his 14 years of driving.

One of my parishioners came up to me after worship on the Sunday following Philando’s death and said, “My boys were stopped numerous times in Falcon Heights.” This man is white, but his sons have an African-born mother. Tom’s boys grew up with Gerald’s and my boys in the Faith Mennonite Church youth group. They shared trips to the Boundary Waters Canoe Area and were very similar in terms of family background, education, and interests. But they’ve had very different experiences on the highway.

After the events of the past month (and several years in our country), I read the Merciful Samaritan story from a different vantage point. I find myself thinking more about the wounded man. Who was he?, I wonder. Why was he attacked and robbed, when the three religious folks seemed to travel through with no trouble? And then I wonder: does our awareness of the dangers wrought by institutionalized racism in our country call for new forms of Works of Mercy [a set of Catholic practices drawn from the ministry of Jesus]?

I would like to share a couple stories that offer a glimpse of what these new forms might look like. Works of Mercy that respond to communities who are left along the roadsides of our country’s highways.

The first is a Mennonite story. Last summer, after the national Mennonite convention in Kansas City, Jane and Vernon Goering, from Mountain Lake, Minnesota, were driving home along Hwy 29, headed toward Sioux City, Iowa. All at once, they passed a group of five young African American men and a dog along the side of the road. Within minutes they were looking at each other and said, “We should go back to see if they need help.”

They turned around and parked their car on the opposite side of the road. Crossing over they could see a car in the ditch that would need to be towed out. They asked the men if they had called for help. They replied that they had and that they had been waiting for over an hour. Jane told them that she and her husband would like to stay until help came and they were safely on their way, since they knew that young black men didn’t always have positive experiences with law enforcement. The men visibly relaxed.

When the police finally arrived, they came in three cars. They asked each of the men to show their identification. And then they asked Jane and Vernon what they were doing there. They replied that they wanted to be with the men until they were back on the road. The police told them that, now that they were there, there was no reason for them to stay and that they should leave. But the Goerings were adamant that they would remain.

Finally, a tow truck came and got the car out of the ditch. Although it had a bit of damage, it was drivable. Before the men left, they all came and shook Vernon’s hand and gave Jane a big hug. Jane and Vernon received their gestures as an act of hospitality toward them. Their protective presence was certainly an act of mercy.

The second is a Catholic story. Unlike the priest and Levite who walked past the wounded man on the road to Jericho, Archbishop Hebda of the Archdiocese of St. Paul and Minneapolis, paused to listen to the request of Philando Castile’s mother that her son’s funeral be held in the Cathedral of St. Paul. The family belonged to a Baptist church in North Minneapolis—the same church that held the funeral for Jamar Clark, an unarmed black man who was shot by police last November. But Philando’s mother thought her son, beloved by so many and affectionately called “Mr Phil” in the school where he worked, deserved to be remembered in the beauty and dignity of a cathedral. Bishop Hebda, following in the steps of Bishop John Ireland who built and dedicated the cathedral as a spiritual home for all, said yes.

The funeral was not a mass, but it had a liturgical form that was recognizably Catholic. The standing-room-only crowd of people from many backgrounds were respectfully solemn during the prayers and readings, but broke into shouts and claps when two different African-American choirs sang and when the Baptist bishop gave the eulogy, which turned into a Baptist sermon. As he neared the end of his sermon, which was at least twice as long as the priest’s homily, he said, “As we met to plan the service, the rector of the Cathedral told me that everything done here is scripted. And I said, ‘Father, we Baptists do not chain the Holy Spirit.’” A day later when they met to continue planning, the rector told the Baptist bishop, “Bishop, I thought about your words last night, and we don’t want to chain the Holy Spirit.” Risking deviation from the cathedral’s script so a marginalized community could grieve was an act of mercy, a generous act of comforting the afflicted.

We have shared and heard many wonderful stories of mercy in these days together. Stories from early Christianity to the present. We now prepare to imitate our Lord’s act of mercy in kneeling to wash his disciples’ feet. This was an unexpected, imaginative act on Jesus’ part. May our participation in this ritual, kneeling, washing, rising, and receiving, fill us and free us to boldly imagine new ways that we can show mercy in our world.