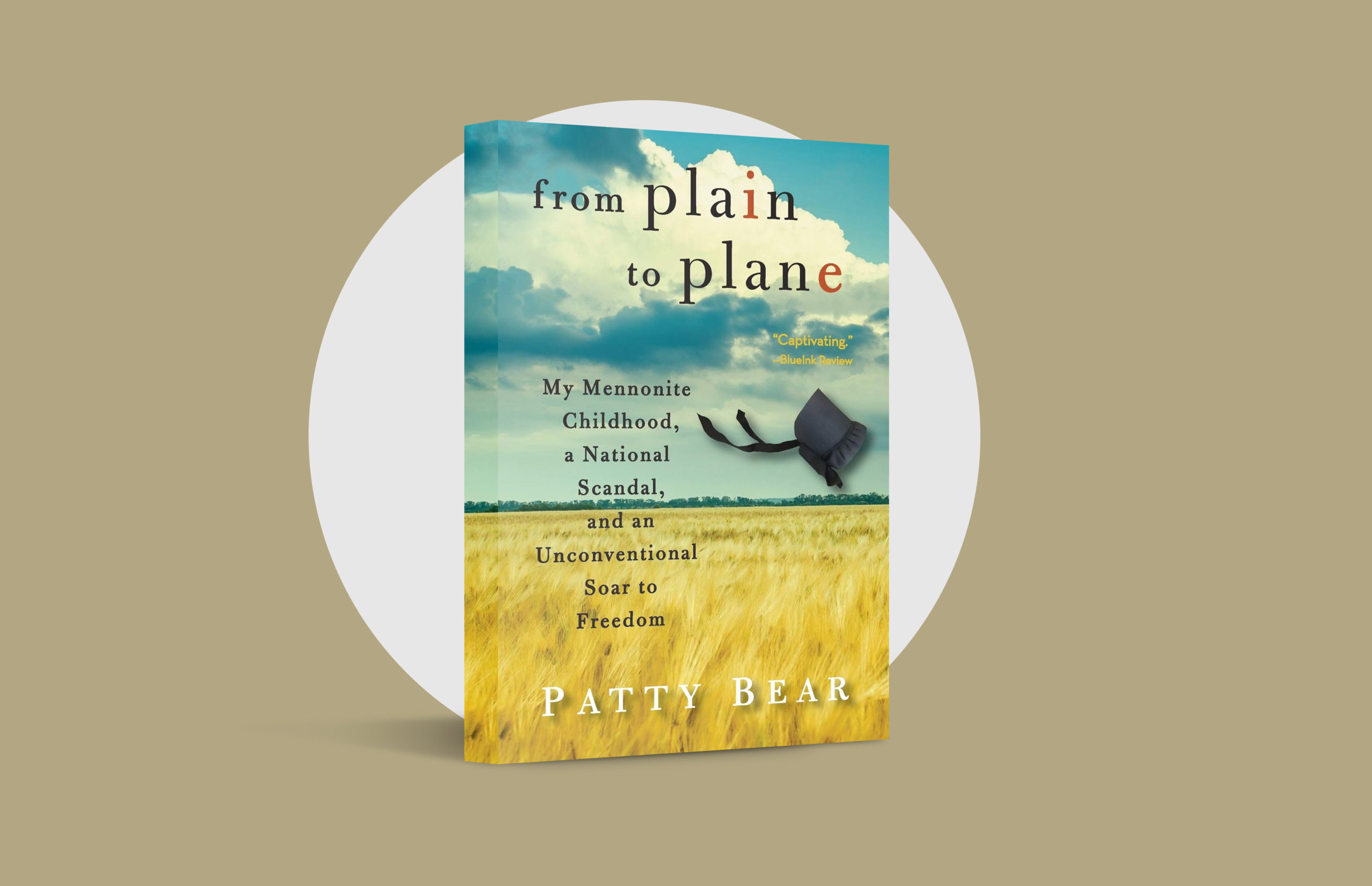 From Plain to Plane: My Mennonite Childhood, a National Scandal and an Unconventional Soar to Freedom, by Patty Bear (Barnstormer Press, 2021)

In the summer of 1972, Patty Bear’s life changed dramatically. Her father, Robert L. Bear, described June 1972 as a marker between two distinct eras: “before the Trouble” and “after the Trouble began.” For Patty Bear, her mother and her five siblings, though, the trouble was Patty’s father, whose shunning from their Reformed Mennonite community led to a decade of legal wrangling and abuse.

A court case that brought national attention to Reformed Mennonites is part of a larger story Patty Bear tells in her compelling memoir, From Plain to Plane. Bear, who was 8 when her father was shunned, narrates her family’s experience of being terrorized by her violent father. She provides an alternative history from media representations of Robert Bear as a beleaguered spouse and victim of the church’s draconian policies.

After being shunned, Robert Bear began a long campaign against Reformed Mennonites. He argued that the ban destroyed his marriage and home and that the ban abrogated his religious freedom. He spent years battling in court for the return of his children and wife to his home based on religious-freedom claims.

While fighting the church in court, he abused his children and wife. From Plain to Plane outlines the disparity of what Bear said he wanted (his family returned to him) with how he acted (violently, separating him further from his family).

Patty Bear provides a well-documented timeline for Robert Bear’s battles, including court transcripts and newspaper clips, from small-town papers to The New York Times and Washington Post. These paint Robert Bear as a soft-spoken Mennonite farmer, a freedom-of-religion crusader simply wanting access to his children.

His family experience was far different from the media accounts. Patty Bear tells of her father’s violence robbing her and her siblings of a normal childhood. Although the abuse was often directed at Gale Bear, Robert’s wife, the children also faced hardships as Robert — having moved out of their home — denied them electricity, stole their furniture and food and essentially chased them from their farm, forcing the family into hiding.

When Gale Bear finally gained some independence and a new home for her family, Robert Bear continued to stalk them. Breaking down the door with an axe, he abducted one of his teenage sons and shaved the boy’s head to embarrass him. He showed up at Gale Bear’s job, dragged her through a parking lot and shoved her into his truck. For this incident he was arrested and charged with several crimes, but acquitted. On the stand at his trial, he blamed the church for his misery. (People magazine, in 1979, presented his story of the abduction as a romantic attempt gone wrong.) A jury took less than an hour to decide he was not guilty.

I wonder whether today’s reckoning with the #MeToo movement might have yielded a different life for the Bear family. Robert Bear managed to control the narrative about his family life. He hired a public relations firm, wrote a book and curried the sympathy of national media; in this way, he is little different from other powerful men who’ve only just now faced retribution for years of violent behavior, thanks to a groundswell of support for sexual abuse survivors.

Patty Bear embodies her family’s resilience. During the decade of turmoil, she became a top-rated cross-country runner for her high school, completed several marathons, worked to help support her family, and earned her private pilot’s license. Wanting to attend college, and believing she needed a full scholarship to attend, Patty Bear set her sights on the Air Force Academy.

The irony of joining the Air Force is not lost on her, as someone who grew up in a Mennonite church (though she and her siblings were never members) and who learned the significance of conscientious objection to violence, even as her father used the church as a cover for his own violent actions. Meanwhile, Robert Bear continues his battle with Mennonites: He was arrested in 2016 and in 2019 for vandalizing the Middlesex Reformed Mennonite Church as he attempted to glue copies of his manifesto to the church’s walls; in 2017, he was arrested for parole violations, including stalking and trespassing.

Recent news reports about Robert Bear now acknowledge his violent past, one at least 50 years in the making. Patty Bear’s story is an important reminder that those with power and privilege often control a narrative and that justice is served only when the oppressed — like Gale Bear and her children — have a chance to speak.