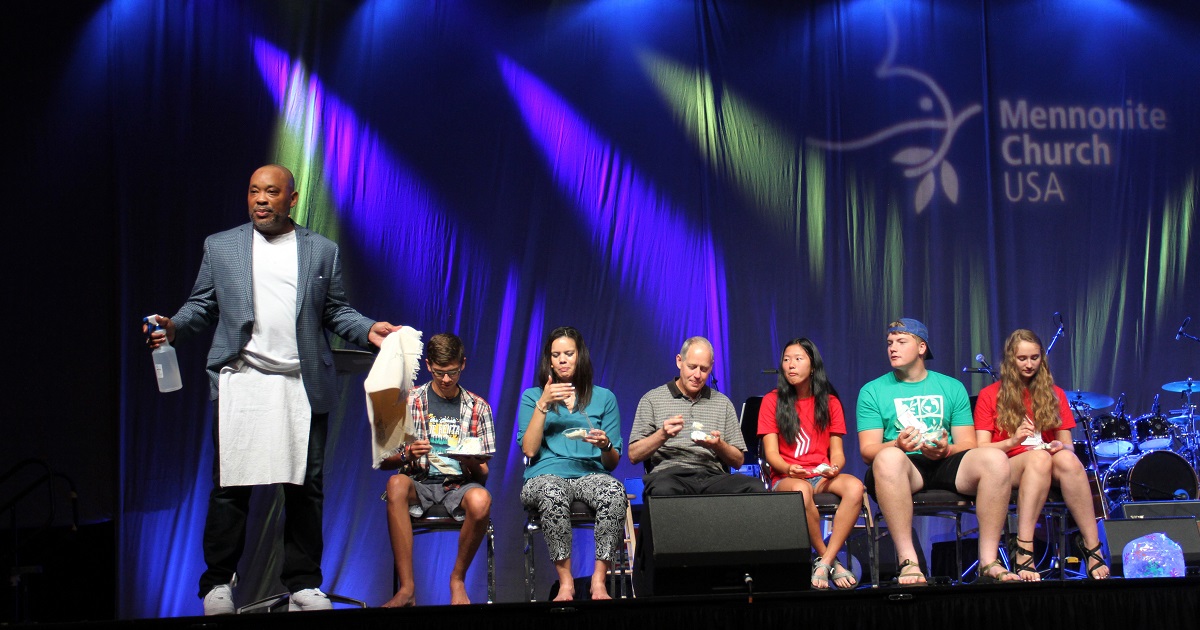 It was time for the sermon when the lights dimmed at the closing worship service July 6 at Menncon19. The opening guitar notes to Nirvana’s “Come As You Are” — instantly recognizable to many in the great hall — were then joined by a singer who grabbed the mic.

With a grunge edge to a voice contrasting with the pocket square peeking out of his sport jacket, MC USA executive director Glen Guyton stalked the stage with commitment to something greater than karaoke.

In a service sending MC USA back to its congregations and outside those church buildings’ walls, Guyton said God will do the hard work of transformation. The people need only send a clear message of welcome, and they in turn will be blessed by the people they encounter — just as they are.

“I know we have ideas about who’s in and who’s out, but we need to go into this world disarmed,” he said. “Sometimes we need to lay aside our doctrines and degrees and our understandings in order to go out and reach people who need God.”

Referring to Luke 10:2-5, Guyton encouraged the denomination to authentically let other people know God has a place at the table for them, just as they are.

“That’s the message I want us to send back as Mennonite Church USA, that we are one,” he said as applause cut him off. “None of us is too good to get down on our knees to wash each other’s feet — no matter how they identify themselves, how big their bank account is or their physical limitations — we are all children of God.”

Given space, God can work, but even documents like those produced in delegate sessions can crowd out those opportunities. In challenging times for many churches, MC USA’s documents won’t save it, he said.

He knows a thing or two about transformation. Recalling the lyric “I don’t have a gun” in the Nirvana song, Guyton promised amazing things will happen if the Holy Spirit is given the chance.

“Twenty-six years ago I became part of this church. I was a military officer, and now I’m a leader,” he said. “Tell me that transformation is not possible.”

With the Twitter hashtag #bringthepeace on large screens, Guyton challenged everyone in attendance to come up with one to thing to do in their congregation or as an individual to bring peace to their community. It’s something MC USA will be talking about for the rest of the year.

“I want you to have one idea you will do in the next six months to redeem this brand of Christianity,” he said. “I’m not trying to redeem Christ. He’s already redeemed… I want you to do something.”