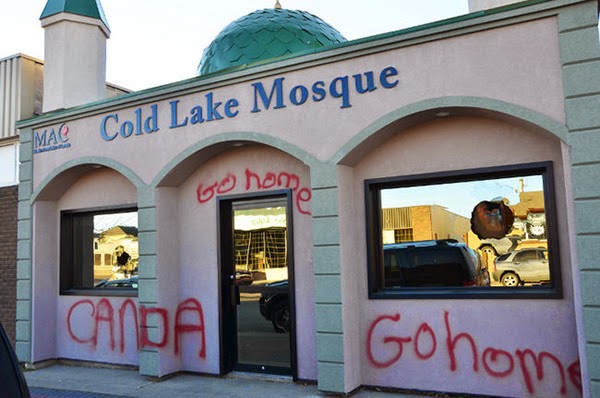 Places of worship burned to the ground by arsonists. 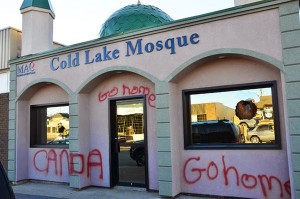 Increased police surveillance of neighborhoods where members of the community live.

An entire group viewed with suspicion and animosity because of their religion, language and association with people who are determined to harm innocent people around the world.

The plight of Canadian Muslims in 2015? No — Mennonites in Canada during World War Two.

When the Second World War broke out, Mennonites were viewed as Nazi-sympathizers for several reasons.

First, they spoke German at home and church.

Second, they often lived in isolation from other Canadians, choosing not to socialize or affiliate with non-Mennonites.

Third, they had strong pacifist convictions, and many Mennonite men refused to serve in the military.

The fact that some Canadian Mennonites expressed admiration for Hitler, and held pro-Nazi sentiments, only made things worse.

The result? Suspicion, fear and hostility. In 1940, arsonists burned two Mennonite churches in Vauxhall, Alta., and one in Newton, Man.

That same year, a Mennonite church in Leamington, Ont., was vandalized. In Alberta, Mennonites were forced to close their German-language schools and libraries. In other places, police surveillance was increased in communities that were home to Mennonites.

Mennonites responded by issuing official statements deploring Nazism and assuring Canadians of their loyalty to Canada.

In 1940, Mennonite leader B.B. Janz wrote that Mennonites are “loyal to the King and their home country, Canada,” not “preferring any other country in the world.”

But Janz realized that simply condemning the Nazis and proclaiming support for Canada wasn’t enough — Mennonites also needed to show, in practical ways, their commitment to their adopted country.

Said Janz: “Mennonites, according to their Confession of Faith, have a conscience that does not permit them to shed any human blood. But on the other hand they have also a conscience, a love and an inward obligation towards their home country, which places the responsibility for its welfare upon them even to the degree of suffering for it.”

He went on to say that “whatever the service may be, though it requires sacrifice, sickness, suffering or even death, we have no right to shrink back before anything.”

The result was the alternative service program, which found thousands of Mennonite conscientious objectors serving their country in nonviolent ways in factories, mines, forestry, hospitals and farms.

Through the program, created with the Canadian government, Mennonites were able to show that they weren’t just going to enjoy the benefits of life in Canada without giving something back.

It helped. Through it, Mennonites earned the respect, if not always the acceptance, of their non-Mennonite neighbors. Today, despite a continued commitment to pacifism, no one would question the commitment of Mennonite church members to their country.

These days, it is Canada’s Muslim community that is dealing with fear and suspicion.

Like Mennonites during the Second World War, they have also issued statements and held rallies deploring terrorism and affirming their affection for Canada. But they may also need to do more by being seen to be involved in Canadian community life.

Following the attacks by Islamic extremists in London in 2005, imans from four provinces encouraged Canadian Muslims to “become more engaged in civil society and public life, thereby creating a greater sense of enfranchisement and ownership.”

They added that “the Prophet Muhammad taught that we are responsible for the well-being of our neighbors, regardless of who they are or what they believe.”

It’s unfortunate that any group — today, or 75 years ago — needs to prove itself not to be a threat because of the actions of a few. But if Canadian Muslims are looking for practical tips on how to be proactive and more engaged in Canadian life, maybe they should talk to Mennonites.

John Longhurst, of Winnipeg, Man., is director of resources and public engagement at Canadian Foodgrains Bank. This first appeared on his blog, onfaithcanada.blogspot.ca.