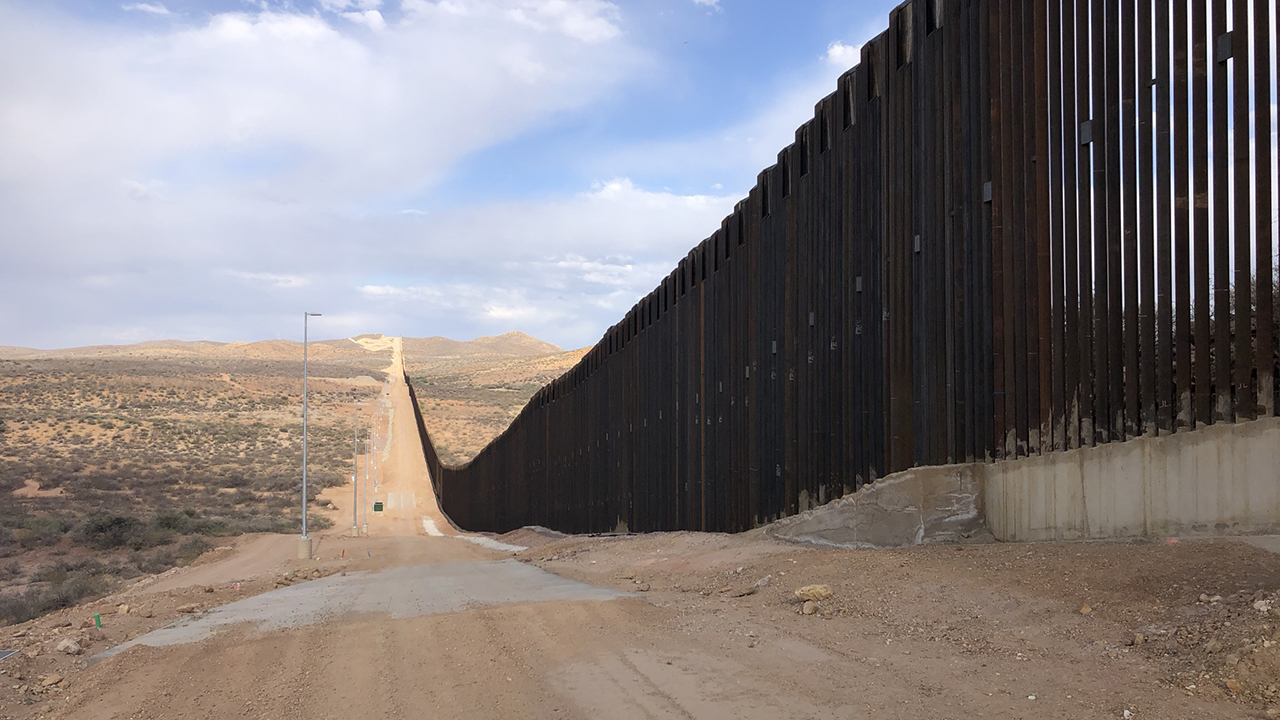 About one-third of the U.S.-Mexico border, just over 650 miles, has a vehicle or pedestrian barrier. This photo was taken about 30 miles east of Douglas, Ariz. — Ron Byler

On a winding dirt road east of Nogales, Ariz., just north of the U.S.-Mexico border wall, I turned a corner and came to an abrupt stop. A half dozen Border Patrol vehicles blocked the road. I watched as eight or 10 young men — handcuffed, apparently just apprehended crossing the border — were shoved into cages in the back of Border Patrol vans.

For the next two weeks I volunteered in Agua Prieta, Mexico, with church ministries responding to the needs of migrants. At the Migrant Resource Center, just steps away from the official border crossing into Mexico from Douglas, Ariz., I watched as young men like the ones I saw east of Nogales were expelled back across the border into Mexico each day. They thanked us for the food and drink but were also intent on getting in touch with their guides, most cartel-controlled, who would help them try again to cross into the United States.

What compels people to leave everything they own and the families they love to endure the indignities I observed on the border? Could it be that the violence and poverty they flee leave them with no other choices?

Just more than a year ago, before the pandemic and before I retired as executive director of Mennonite Central Committee U.S., I spent two weeks on the border, driving the 1,500 miles from where the border wall juts into the Pacific Ocean south of San Diego to where the wall extends into the Gulf of Mexico in south Texas. I visited churches and other ministries responding to the needs of migrants.

In the tent city in Matamoros, Mexico, just across the border from Brownsville, Texas, I met a family who had fled violence in Honduras. The young father told me his uncle and aunt had been murdered in front of their children, and his own father, a Mennonite pastor, was harassed by the gangs. The family had already been in the tent city for more than six months.

A year later, just before I traveled to Arizona in March, this family was finally released into the United States. They are now temporarily living with a host family on the west coast and awaiting their asylum hearing. Like many asylum-seeking families and unaccompanied children crossing the border, they came legally and followed the law. They got in line — an 18-month-long line in a tent city.

Time after time, in this trip and the earlier one, I heard stories of families fleeing desperate situations hoping for a better life in the United States. How should we respond as a Christian community to these overwhelming needs?

On the Sunday after I returned from my recent trip to the border, my Sunday school class was studying Isaiah 58, where the prophet says clearly that our worship and our efforts to seek God mean little if we are not actively seeking justice, sharing our bread with the hungry and bringing the homeless poor into our houses. We saw the parallels in Jesus’ own words in Matthew 25 about when we welcome the stranger, it is as if we are welcoming Jesus himself.

I remembered the weekly vigil I joined near the border crossing in Douglas/Agua Prieta, where a small group of Christians, both Catholics and Protestants, prayed each week for migrants who have died in the desert crossing the border. I heard one participant say, “It’s not a problem, people coming to the border seeking refuge, but it is a problem with how we are [not] receiving them.”

As we face the challenges on our southern border, what would it mean to take Jesus into our homes?

We can certainly support Mennonite Brethren and other Mennonite churches near the border who are responding to the needs of migrants in places like Tucson, Ariz.; in south Texas and in San Antonio; in El Paso, Nogales and elsewhere. And we can support Brethren in Christ and Mennonite congregations in Mexico in the border region.

We can raise our voices for change in our national immigration policies by staying connected with MCC’s Washington Office and urging our congressional representatives to respond. Ask the Biden administration to fully restore asylum protections as international law requires. We can also learn more about border issues through learning tours and other educational resources.

In my community in Goshen, Ind., I have started to volunteer with Center for Healing and Hope, whose vision includes responding to the needs of undocumented immigrants in our community. Are there ways you can respond in your own community?

Meanwhile, along the U.S.-Mexico border, the drug trade continues unabated, guns and money come south at record levels, and the cartel in Mexico figures out new ways to get people across the border wall. The people I talked to on the border say the border wall does little to stop any of it.

In Matthew 22, Jesus tells us the greatest commandment is loving God, and the second is like it: Loving our neighbor. Maybe our job is not to worry so much about the border itself but simply to learn to love God and love our neighbors who are crossing to seek a better life. In doing so, we may be receiving Jesus himself.

J Ron Byler concluded 10 years of service as Mennonite Central Committee U.S. executive director in 2020. He has been on the U.S.-Mexico border a half dozen times in as many years.