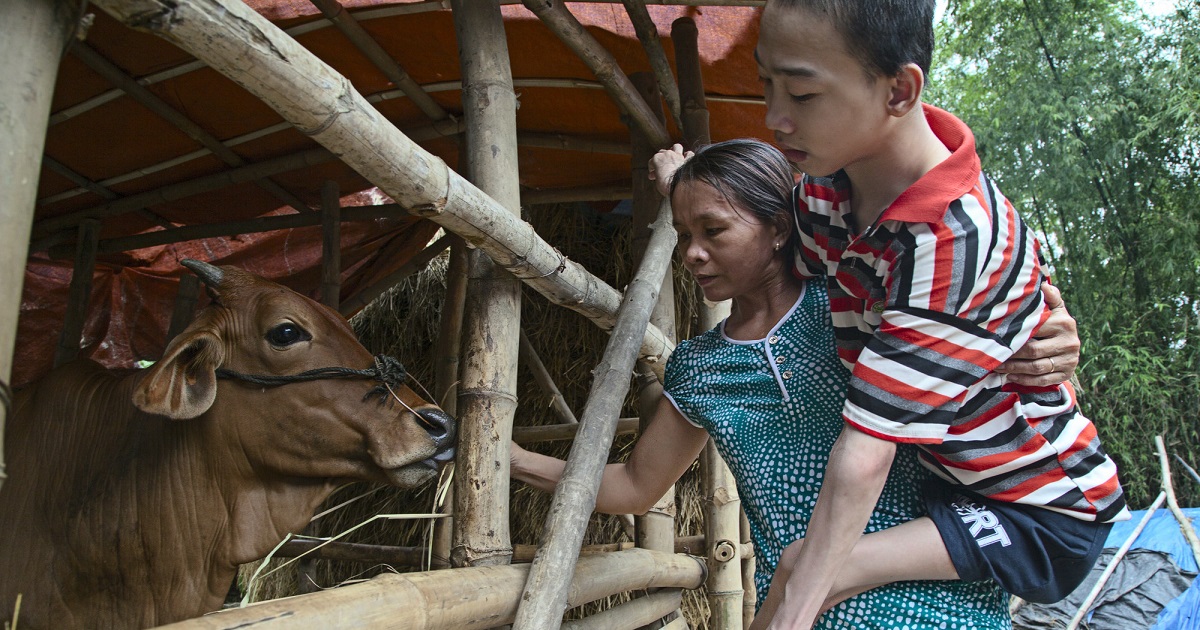 Phng Th Tuyt (48), her son Trn Minh Sn (19), and the cow they received from VAVA. Trn Minh Sn suffers from severe disabilities from birth, a side effect of exposure to agent orange. The family has received a cow from MCC partner VAVA to help with family income and security. In 2015 MCC partner VAVA (Vietnam Association for Victims of Agent Orange) provided a cow to 20 households who have a family member who has been affected by agent orange (a toxic herbicide used in the Vietnam war). The cow will supplement their income after the family passes the first offspring to another family affected by agent orange. By the end of the project in March 2017 families will have received 60 cows from VAVA in Quang Ngai province. This project is expected to sustain itself well into the future as the cows continue to reproduce. (MCC Photo/Matthew Sawatzky)

Photo: Phùng Thị Tuyết carries her teenage son, Trần Minh Sơn, to see the cow they received from MCC partner Vietnam Association for Victims of Agent Orange to help with the family’s income and security. Trần Minh Sơn suffers from severe disabilities from birth, a side effect of exposure to Agent Orange. MCC photo/Matthew Sawatzky.

My husband, Josh Kvernen, and I visited Nguyễn Thị Thanh, a 74-year old woman living in central Vietnam, as we laid the groundwork for a 2018 Mennonite Central Committee (MCC) learning tour to the area. She was angry.

“The poison (dioxin) has brought sorrow on the Vietnamese people, and my family in particular,” she shouted. “Why did you bring this poison to us here?”

She was addressing her words to us because we are from the United States, a country whose military used Agent Orange for 11 years during the war in Vietnam, which lasted from 1954 to 1975. This herbicide and chemical defoliant contained a potent toxin called dioxin, which has since been shown to cause multigenerational birth defects and disabilities among those who were exposed to the chemical.

She had good reason to be angry. Her husband had been bedridden for 10 years. He lay comatose on their bed, requiring her full-time care. During the war he served as a doctor, and he lived and worked in areas heavily sprayed by Agent Orange while he helped care for Vietnamese soldiers.

Ten years after the war he began to experience major health problems and had to stop working. His family connects his illness to his exposure to dioxin through the United States’ Agent Orange spray missions during the war. Their son also has intellectual and physical disabilities that prohibit him from working and could have been caused by dioxin exposure.

We sat with her and listened to her story. We apologized for what our country had done, and for the enduring impact dioxin has had on her family. We explained that we also thought what the U.S. government did was wrong.

Since we were preparing to host an MCC learning tour from Canada and the United States, we explained our hope that the tour participants would come to Vietnam and learn about the ongoing effects of war from people like her. Then those people would be better able to petition the U.S. government for ongoing support for those affected by war in Vietnam.

Our host asked that we encourage the U.S. government to take responsibility and give support to people like her family who are still affected by its war-time actions. By the end of our visit, she served us tea and invited us to visit again, which we later did with a learning tour. For better or worse, she was no longer angry by that visit.

After having experiences like this in Vietnam where we have served since 2016, we were taken aback while visiting Washington, D.C., during the summer of 2018. Hanging on the side of the National Archives was a large banner with the words, “Remembering Vietnam.” It took us a moment to understand that by “Vietnam,” the banner was referring to the United States’ war-time involvement there — not to the people of Vietnam, past or present. This is how we in the United States remember Vietnam — on our own terms, through our own eyes.

How can we remember better and more justly? In his book Nothing Ever Dies: Vietnam and the Memory of War, the Vietnamese-American cultural critic and literature professor Viet Thanh Nguyen writes, “A just memory constantly tries to recall what might be forgotten, accidentally or deliberately, through self-serving interests, the debilitating effects of trauma, or the distraction offered by excessively remembering something else, such as the heroism of the nation’s soldiers.”

When it comes to Vietnam, what is it we have forgotten in the 50-plus years since the war ended? Whether we were for or against the war, are we remembering those who continue to be affected by our government’s actions half a century ago?

MCC seeks to engage in this “just memory” work through learning tours. We believe this work is part of our calling as followers of Christ to build a better peace. We do this work through bringing people to see and experience for themselves the legacy of the United States’ involvement in Vietnam. To express interest in a future learning tour, email learningtour@mcc.org.

We take steps toward remembering more justly when we provide occupational therapy and cow bank programs that support communities living where the spraying of Agent Orange was especially heavy, and whose children and grandchildren still face higher levels of intellectual and physical disabilities.

We support a more “just memory” when we send Vietnamese young adults like Trần Quang Thiên Phước through the IVEP program to work at MCC’s United Nations office in New York City, and share more about the Vietnam Mennonite Church’s commitment to continuing Christ’s way of peace in Vietnam.

Please join our “just memory” work. You can learn more by visiting mcc.org/stories/agent-orange-legacy-we-might-forget.