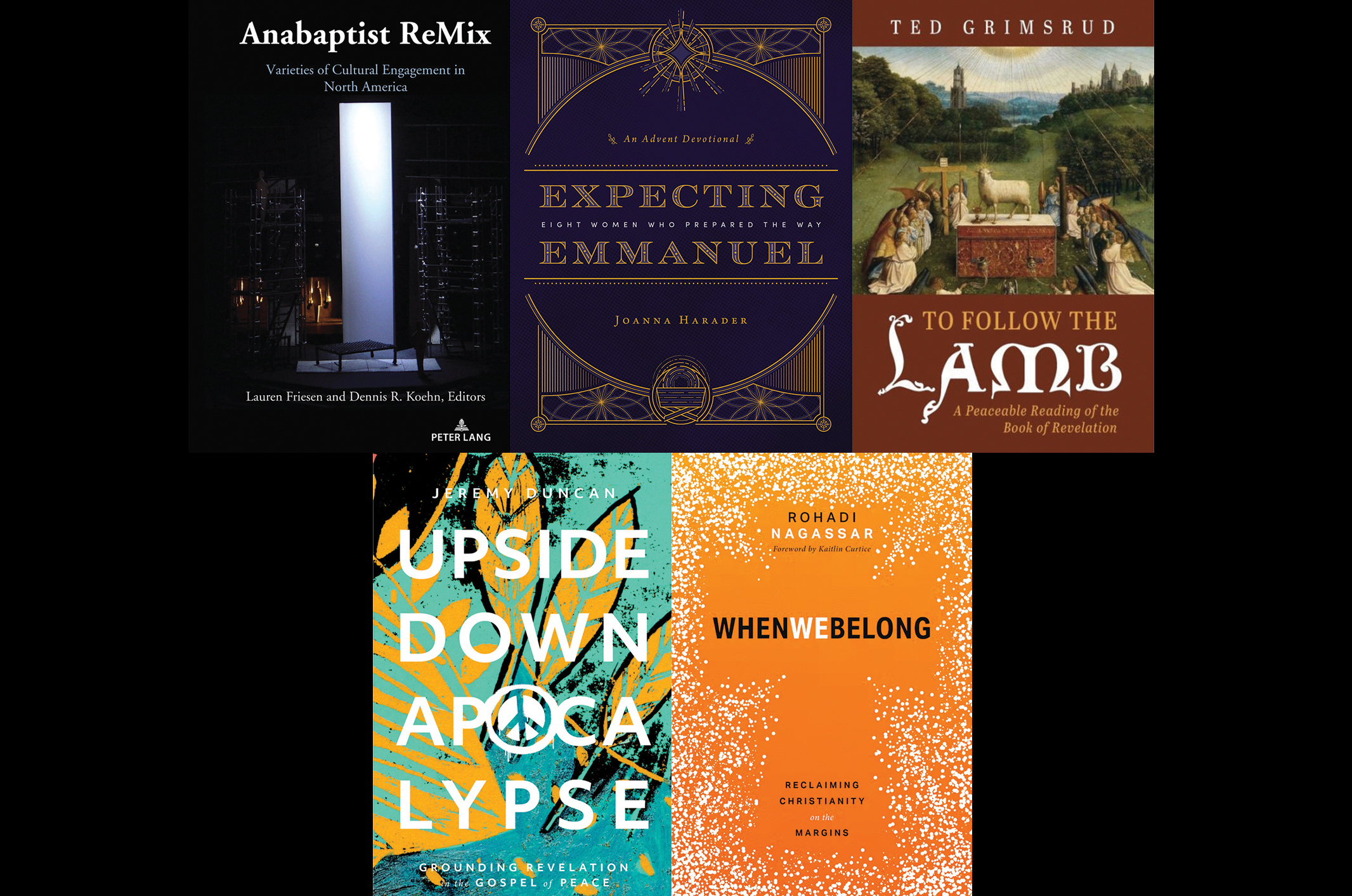 The Oct. 14 issue of Anabaptist World included several mini reviews of recent books. Some of them are books about church life.

Anabaptists today need to examine their identity and practice because “the inheritors of this tradition are fragmenting and dissipating,” writes Dennis R. Koehn, co-editor with Lauren Friesen of Anabaptist ReMix: Varieties of Cultural Engagement in North America (Peter Lang). “The creative vitality of this unique [Anabaptist] tradition is in question,” Koehn says. Sectarian solidarity has been lost, while “acculturation and denom­inational schisms leave vitality in publish­ing, education and outreach in limbo.” Yet, “we hope that a renewed assertion of Mennonite distinctiveness will emerge.” In a wide-ranging collection of essays, 30 writers represent “the lives of creative and courageous Anabaptists who have been carrying out the Jesus vision of salt, light and leaven in the world.” Alongside contemporary voices, the editors revisit prophetic words from the past: Black pastor Vincent Harding’s historic address to the 1967 Mennonite World Conference assembly and a commencement speech at Bethel College by Native American Lawrence Hart in 1998. In “Us and Them,” Al Schnupp reflects on how the sectarian worldview of his youth evolved, in his career as a theater professor, into a desire to build connections among diverse people and an affinity for stories of the margin­alized. His life experience reflects the book’s theme of personalizing trends that have shaped Mennonite identity over 75 years. — Paul Schrag

Joanna Harader, pastor of Peace Mennonite Church in Lawrence, Kan., presents a daily devotional for Advent and Christmas. Expecting Emmanuel: Eight Women Who Prepared the Way (Herald) revolves around the stories of five women in Jesus’ genealogy — Tamar, Rahab, Ruth, Bathsheba and Mary — plus three other female characters connected to Jesus’ early life in the days leading up to Epiphany. The book includes resources for worship, small group and retreat settings, plus artwork by Michelle Burkholder. The devotional can be used any year, beginning on Nov. 27 (the earliest possible start date for Advent) and going through Epiphany, Jan. 6. Harader offers insights to the biblical text but also draws lessons for today — certainly for women, but not only for women. In a devotion on Tamar, she writes, “We can get stuck when we set aside our own autonomy and power to wait for another person to make things right for us.” In one about Rahab, she writes, “Sometimes being on the edge is the exact thing that puts us right in the middle of God’s story.” Harader writes with pastoral sensitivity. This is an immensely useful resource. — Gordon Houser

Revelation is perhaps one of the least read and least preached on books of the Bible, striking many as too strange and having little relevance today. Ted Grimsrud, a professor at Eastern Mennonite University, begs to differ. “Revelation is encouraging us for our present, just as it encouraged John’s original readers for their present,” he writes in To Follow the Lamb: A Peaceable Reading of the Book of Revelation (Cascade). Like Grimsrud, I absorbed dispensationalist theology in the early 1970s and read Hal Lindsey’s The Late Great Planet Earth, which saw Revelation as predicting a future that’s being lived out in our time. But this ignores Jesus’ example of suffering love. As Grimsrud writes, Revelation “is not a vision of the chronological end of time” but “of the purpose of our existence.” Good inter­pretation seeks to discern first what the author meant in addressing his original audience. John addresses seven churches in Asia Minor, encouraging them to remain faithful in the midst of perse­cution and oppression by the Roman empire. That, says Grimsrud, has correla­tion for us who live under an American empire that preaches domination and redemptive violence. He keeps in front of us the victorious, suffering Lamb of Revelation 5 while noting that “the only blood that is shed in Revelation is the blood the Lamb sheds or the blood his followers shed. . . . Blood signifies per­severing love.” Grimsrud addresses Revelation’s visions and symbols and often says they’re not clear. He helps us see Revelation as a book about conflict that promises victory and that presents the means to make victory possible. — Gordon Houser

An excellent companion to Ted Grimsrud’s book is Upside-Down Apocalypse: Grounding Revelation in the Gospel of Peace (Herald) by Jeremy Duncan. While Grimsrud tries to address the entire text of Revelation, with some exceptions, Duncan is more selective. And while his breezy style, drawing on pop-culture references, draws readers in, don’t be fooled: His abundance of background information on the text deepens our understanding. Both authors emphasize that Revelation’s message is, as Duncan writes: “Victory is won, not with weapons, war or force, but with the testimony of nonviolence.” One important insight is how much Revelation draws on the biblical prophets, especially Isaiah. He also, unlike Grimsrud, gives proper atten­tion to the genre of apocalyptic literature, popular in the first and second centuries after the time of Christ. Duncan’s explora­tions of the historical background are helpful and, like a good preacher, he makes connections to our current situation: “For John, the trans­formation of the cosmos begins in faithful, local communities that care for each other.” He doesn’t shy from pointing out Revelation’s challenge: “One of the mis­takes we can make when reading Revelation is to imagine that John is pointing a finger at a villain rather than revealing something about our world.” He concludes, “Our anger at injustice won’t reveal God fully; only our love for others can.” Like Grimsrud, Duncan notes facile and false interpretations: “The painful irony is that for a book that never mentions an Antichrist, misreadings of this image that diminish the nonviolence of Jesus are anti-Christ.” — Gordon Houser

Questions are good. That’s one of Rohadi Nagassar’s principles for building a better church in When We Belong: Reclaiming Chris­tianity on the Margins (Herald). This book is Men­nonite Church USA’s Common Read for fall 2022. Nagas­sar believes the shrinking North American church needs to deconstruct — by asking the basic questions that identify institutional “malformed roots” and point the way back to Jesus. A Canadian pastor, Nagassar offers a bracing prescription for breaking out of the typical version of Christianity that privileges whiteness and aligns with power. People yearn to belong, but today fewer find a home in churches that define themselves by the barriers they preserve rather than the freedom they should announce. As a person of color, Nagassar offers direction for congregations that run up against a “diversity limit” because they were “formed in homogeneity.” He believes “missional” churches have many of the same problems as old-style “attractional” ones, which expected seekers to simply walk through their doors. One problem is a lack of racial and gender diversity. They’re dominated by white men who have a hard time identifying with the needs of those who are marginal­ized by patriarchy and white supremacy. Nagassar is an astute guide on the search for “a faith that exists beyond the baggage of institutions and their boundaries.” — Paul Schrag