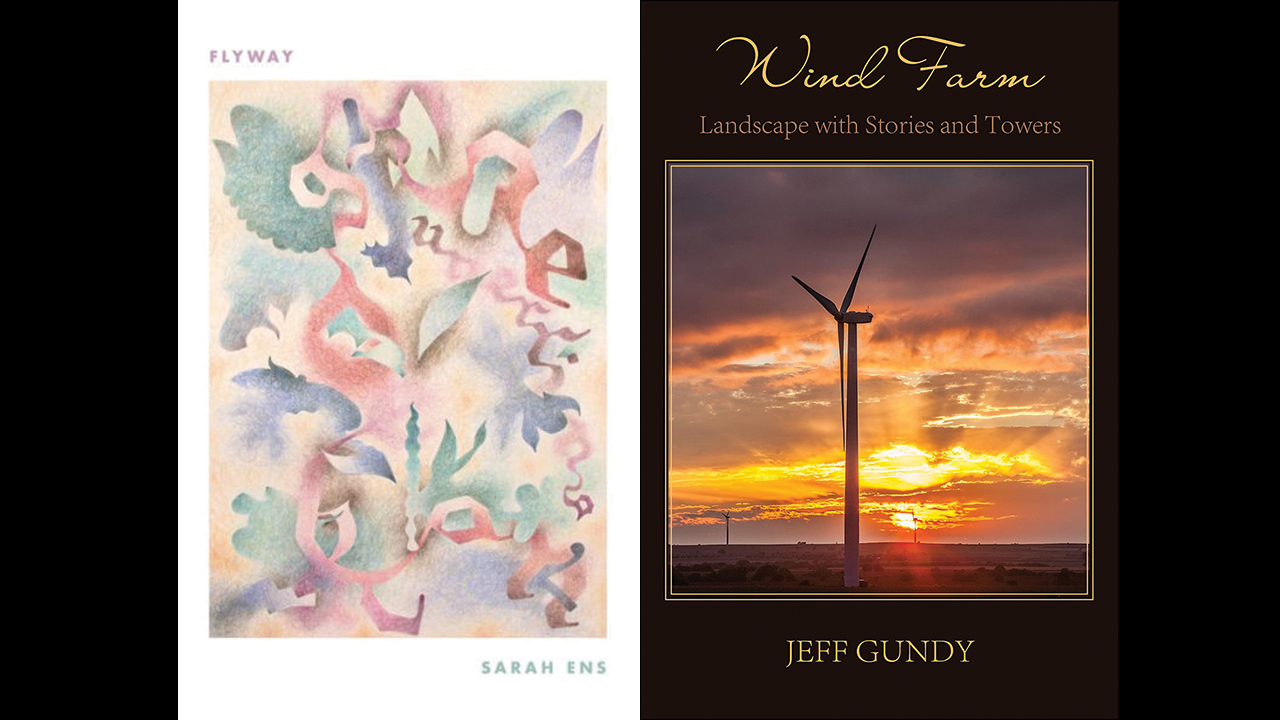 The Oct. 14 issue of Anabaptist World included several mini reviews of recent books. Some of them are poetry collections.

“I don’t know what I thought would happen/when I came to this last stand/of tallgrass/holding field guides, family archives, & prayer/stones in my hands,” Sarah Ens begins in her second book of poems, Flyway (Turnstone). Ens creates a tallgrass psalmody, observing migratory birds nesting in the Manitoba prairie — “I will try to tell the truth/to the blood feather tangled in the reeds” — interspersed with the story of her Oma’s flight (1929-1945) from Ukraine to Poland to Slovenia to Germany, here imagined by her grand­daughter with the help of family history and letters. The resultant poem, “Flyway,” stretching over 100 pages, reflects in its poetic line the psychological chaos. It begins mostly in couplets, a tidy structure that disintegrates with the trauma and chaos of Stalin’s arrest/execution of 10,000 Mennonite men (noted in the end­notes), flight, loss, rape, drowning and loss of brother Hans to the Nazi army. “I could hear the Black Sea/wailing, weight­ed, full of bodies, my dreams all bloat and bog.” The second section — settlement in Canada, titled “Un/Settling” — documents the family’s history from 1948. The poetic line too becomes unsettled, sometimes frantic, broken, scattered, traumatized as it is imagined from the characters’ experiences. In the final psalmody, Oma’s question, “How do you remember home?” becomes an anguished cry from the poet’s vantage point. — Raylene Hinz-Penner

The looming presence of wind towers marks lyrical essays by Jeff Gundy in Wind Farm: Landscape with Stories and Towers (Dos Madres). Using the moniker Wind Farmer, Gundy, distinguished poet in residence at Bluffton University, touches on subjects such as climate destruction, the history of Native tribes that settled in the area around Flanagan, Ill., where he grew up on a family farm, and the migration of people like himself, who have left such rural communities for cities or univer­sities. He incorporates memoir, with stories of his childhood in a Mennonite family, along with reflections on the land, which he describes as “a vast industrial site, a landscape peopled ever more thinly, as technology, big machines and chemicals make it possible for fewer and fewer workers to extract vast amounts of grain from the black, rich soil.” Gundy, who has published 12 books of poetry and prose, ends with a meditation on “the vast and complicated wind, the wind without border or end, the wind that is ghost and spirit and breath, the inbreath and outbreath of the being more real and tenuous than dark matter, than strings or quarks or whatever particles, spins, sparkling bits of almost nothing make up the heart of the real, the spirit, the wind, the breath.” — Gordon Houser