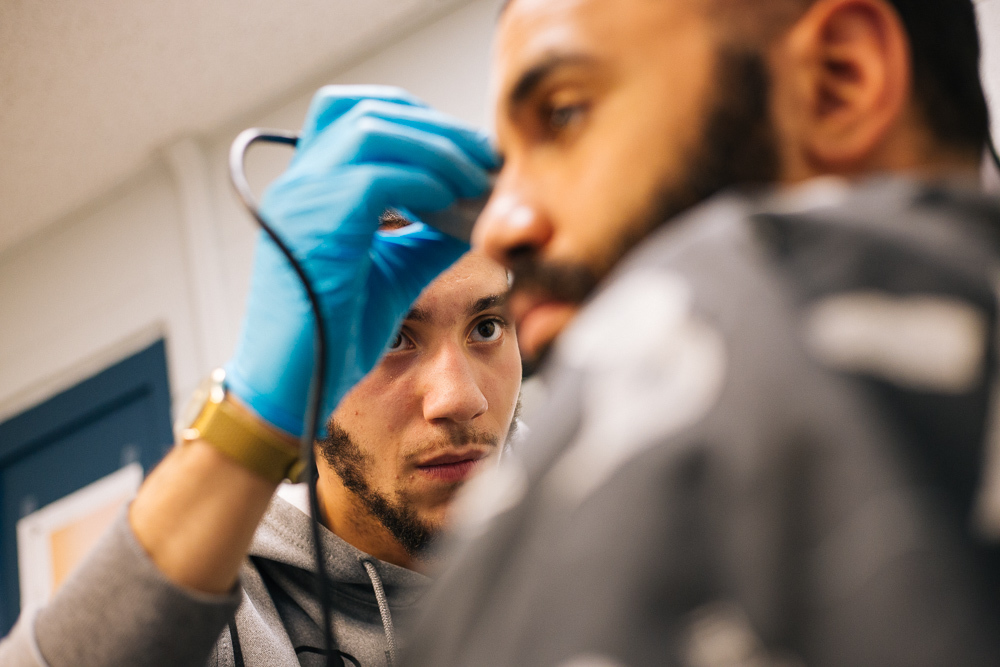 Students and staff involved in the creation of the barbershop in University Commons gather to talk about what it means to have this space on EMU’s campus. Erick Camodeca, asst. track coach, gets his hair cut by Mark Loving.

Senior Mark Loving III works on a temple fade for associate cross country and track and field coach Erick Camodeca during a special preview evening in The Royal Treatment, Eastern Mennonite University’s new student lounge. The grand opening of the room, which includes amenities of a barbershop and salon, is Jan. 21, during the university’s Martin Luther King Day celebration. Photo by Andrew Strack/EMU.

On Friday afternoons and other days on demand, senior Mark Loving III opens an informal barbershop in his campus apartment at Eastern Mennonite University in Harrisonburg, Virginia. Guys and a few girls, too, line up for a fresh look for the weekend, issued with the staple of joking, gossip, wisdom and counsel.

Soon, though, he’ll perform his craft in a proper barber’s chair with a proper mirror in EMU’s newest student space. Modeled after a barbershop and salon and dubbed The Royal Treatment, the space will be managed by the Black Student Union (BSU).

“This is much more than a barbershop. This is a sanctuary,” says senior Jourdyn Friend, BSU vice president, during a special evening preview of the room. “Your hairdresser is more like a counselor, there to talk about your problems, because you’re there so long you might as well. This space is progress toward recognizing not just the majority but also the minority. This is a symbol of our voice being heard.”

The grand opening of The Royal Treatment–which includes two barber’s chairs, a hairwashing station, television and two comfortable couches, all enlivened by a bright wall mural celebrating African and African-American culture–is Jan. 21 at 11:45 a.m., during the university’s Martin Luther King Jr. Day celebration. The ceremonial ribbon-cutting will be followed by a barbershop talk with local barber Tyrone Sprague. During past MLK days, a visit to Sprague’s downtown barbershop for some history, legend and lore was a much-loved EMU tradition.

“We’re so pleased that Mr. Tyrone Sprague will be coming to help us celebrate the opening of our very own barbershop and salon,” says Celeste Thomas, director of multicultural services and senior advisor to the president for diversity and inclusion. “Just like his barbershop has been for years, I know this place is going to be full of joking and laughter and wisdom, a place where people can literally and figuratively let their hair down, where they can come and have a good time and be relaxed and comfortable.”

For the sneak preview hangout last week, though, it was Loving who did the barbering honors in front of a group of student representatives from BSU and Latino Student Alliance invited by Thomas and lead residence director Scott Eyre. Both Thomas and Eyre sit on EMU’s Committee on Diversity and Inclusion (CODI), a 17-strong group that advises, consults and educates the EMU community.

BSU members called The Royal Treatment a major milestone in the university’s history. Senior Jessica Washington, the club’s secretary, said she never imagined “something like this” when she arrived on campus four years ago. “This is a real blessing.”

BSU co-president Jakiran Richardson, a sophomore, views the new space as the university’s way of showing empathy and understanding for students of color who must adapt to a predominantly white campus culture. “We understand what you’re going through,” he translates. “Here’s something to show our appreciation for you being here and that we are about who you are.”

Erick Camodeca, associate cross country and track and field coach, took advantage of the preview to relax in the barber’s chair while getting a “temp fade” from Loving.  Also a member of CODI, Camodeca might be new to the campus–he arrived last summer–but his experience at four other universities has given him a critical eye.

The new space, he says, “sends out a message that this university does care, that we are making a commitment to diversity and to our students.”

The barbershop is “all about community, which is one of EMU’s core values,” Camodeca adds. “What a better place to have a barbershop where people can come in of all diversities and backgrounds and share an experience and learn something.”

A measure of support for the room was the wild success of its crowdfunding campaign. More than $2,600 was raised by donors to purchase sinks, chairs and other amenities and decorations.

Historically, the African-American barbershop and salon was, and still is, a meeting place, “a place where mothers take daughters, where fathers take sons, a family place, a place of confidentiality and gossip, with people coming in and out, selling this and that,” Thomas says.

“Not to mention food,” adds Friend to general laughter. “You can get your dinner there.”

The barbershop was also a place where “planning happened through the Jim Crow era and the civil rights movement,” Thomas says.

“It’s still definitely a place where dreams are fostered,” says former BSU co-president DeVantae Dews. Dews found Sprague’s barbershop downtown when he first arrived from Lynchburg as a first-year student. Over the years, time spent with Sprague reflecting on the Civil Rights and Black Lives Matter movements, along with a host of other topics, were important to his own outlook and activism.

“Those conversations gave me hope and vision for what I believe the next movement is to come,” Dews says, “and so I can only imagine how much wisdom will be poured down through our generations here in this place, and what this space can do–for reflecting on the growth that’s happened here at EMU and the planning we can do to make more change to help make this campus a better place for everyone.”

Eyre, the residence director, appreciates the new space as an opportunity to learn about and appreciate cultures different from one’s own. The barbershop and salon is rooted in his own learning experience, which began when female students using hair straighteners in the dorms repeatedly set off fire alarms.

“The reaction of some white and white Mennonite students who didn’t understand what was going on helped me admit that I didn’t know either,” Eyre says. “With a lot of grace, Celeste answered questions and shared about African-American hair and hairstyling and the processes involved, and I realized that EMU could do better in providing and creating spaces in support of our students.”

The barbershop and salon will be a familiar cultural space to many African-American students, he says, but white students “will have to figure out how they fit in,” a fair experience considering that African-American and minority students make that effort constantly at EMU, he says.

The cozy room in University Commons is located in a former office donated by the Student Government Association. Students at the sneak preview event said they were confident the space would quickly become a campus hangout.

The ambience brought back memories for Ariel Barbosa, co-president of Latino Student Alliance, of going to the barbershop with her dad, who has both African and indigenous Brazilian heritage. That same feeling of “being at home there” in the barbershop of her childhood is one she hopes will be shared here. “I’m excited that students are at the center of this project,” she says. “I just envision this as a space that will be one of true diversity, where people of all hair types will find a place.”

For Dews, who had worked on the initial plans for the space several years ago, sitting in the new lounge gives him “great hope,” he says. “And if I am hopeful sitting here, think of how a freshman would feel.…I believe this is the small fruit of the harvest of what God wants to do on this campus when looking at diversity, reconciling racial and social economies and all the other social constructions that try to divide us. This is just the beginning of what can happen on this campus.”