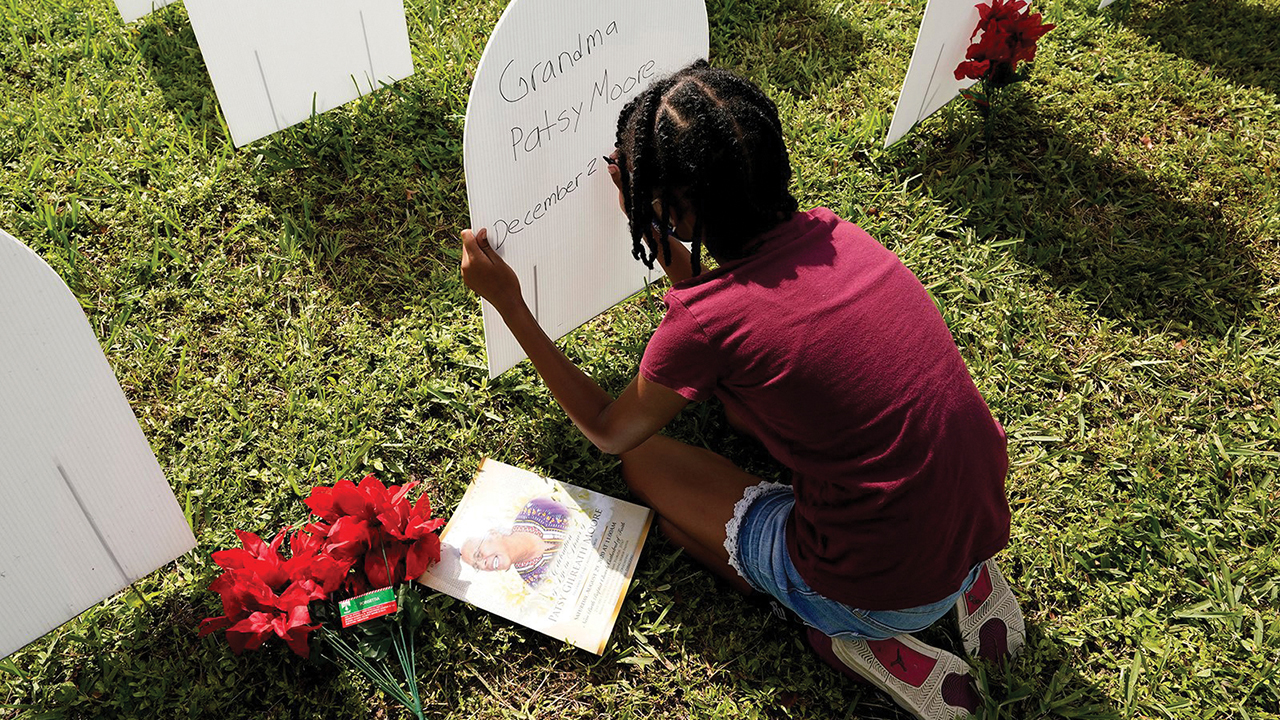 On Nov. 24, Kyla Harris, 10, writes a tribute to her grandmother Patsy Gilreath Moore, who died at age 79 of COVID-19, at a symbolic cemetery created to remember and honor lives lost to COVID-19 in the Liberty City neighborhood of Miami. — Lynne Sladky/AP

Almost 400 years ago, as the gloomy December of 1623 began, the dean of St. Paul’s Cathedral in London was dealing with an epidemic. With no interactive graphs or websites to visit, his access to the daily statistics consisted of “plague bills,” posters displayed daily to record the previous day’s deaths, and the seemingly endless tolling of bells, which were used to mark the passing of each dying sufferer. It was bound to be a grim Christmas.

However, the dean himself, John Donne, was also sick, and he thought for some days he would die. From his sickbed he managed to write a set of meditations, “Devotions upon Emergent Occasions,” reflecting on his own experience as well as what was happening around him in the public health crisis that Advent. It includes these words:

“No man is an island, entire of itself; every man is a piece of the continent, a part of the main. … Any man’s death diminishes me, because I am involved in mankind, and therefore never send to know for whom the bell tolls; it tolls for thee.”

These famous few lines suggest a kind of compassionate solidarity, urging us to a sense of deep connection when others die, or might die. But we find his real point is not just compassion for others, even during a plague, but the necessity of attention to the self. In the prayer that follows that famous meditation, Donne says to God:

“I humbly accept thy voice in the sound of this sad and funeral bell. And first, I bless thy glorious name, that in this sound and voice I can hear thy instructions, in another man’s to consider mine own condition; and to know, that this bell which tolls for another, before it come to ring out, may take me in too.”

This is not exactly the stuff our usual holiday preparations are made of, even among the religious. In a more regular year, we still start clutching at the straws of seasonal jollity around now, since the gloom of even a normal winter can indeed oppress. Themes of light, peace and hope are appealing to us all amid the winter dark, as we look uncertainly to the portal of a new year.

It is not, however, a regular year. Between the inherent danger of COVID-19 and our collective inability to respond effectively to it, death has broken down the portal and marched in. This year more than others there could be an understandable tendency to seek distraction. But as further spikes are driven by observance of the holiday season itself, our choice is whether to look away or to face death as an inevitable part of the 2020 holidays.

Religion plays a major part in many people’s holiday observances, of course, but might seem to function like a more spiritual form of distraction. What if the religious response this year were not simply such distraction or even a faith-based contribution to the necessary if elusive quest for a responsible approach to public health? What if, this year, religion helped to offer a different attitude toward death itself?

Masks and vaccines can prolong life and defer death, but they cannot defeat it. While we should wish to protect ourselves and others from the ravages of the pandemic — and unfortunately, this in itself seems to be a necessary witness in the face of indifference right now — what might distinguish people of faith is recognition that death itself is not the end.

Donne had gone on to say, of that same tolling bell, “for even that voice, that I must die now, is not the voice of a judge that speaks by way of condemnation, but of a physician that presents health in that. Thou presentest me death as the cure of my disease, not as the exaltation of it.”

Donne was not alone in this view of death. Another extraordinary Advent sickbed composition, the “Canticle of the Sun,” written by Francis of Assisi late in the year 1224, culminates with the praise of God even in and through death:

Praised be You, my Lord,

through our Sister Bodily Death,

from whom no living man can escape.

This notion that death could be viewed differently — if not exactly as good, then at least put in its place by a faith that refuses to see death as the end — seems odd to us, but this may be our fault, not Donne’s or Francis’.

Donne’s next-most-famous piece of religious writing is a sonnet to this very effect:

Death, be not proud, though some have called thee

Mighty and dreadful, for thou art not so;

For those whom thou think’st thou dost overthrow

Die not, poor Death, nor yet canst thou kill me.

Christmas celebrates what Donne and Francis recognized: not merely the presence of God in the material world, but a divine purpose or presence in mortality itself. Once, this was obvious; ancient and medieval Christians could depict the heavenly infant Jesus bearing his cross as he entered Mary’s womb at his conception or see the wood of the manger as a hint of the wood of the cross.

Even in the Gospel story, the Magi brought gifts, including myrrh, a precious embalming perfume. Donne spoke of the similarity between the “swaddling clothes” of the newborn, familiar from the nativity story, and the “winding sheet” or shroud of a corpse. There was always something grim lurking in the story.

The modern focus on the merriment of the holiday and the detachment of the Christmas message from these more sobering ancient elements reveals our tendency to approach the problem of death as a matter of distraction rather than of contemplation. Christmas need not, should not, avert its eyes from the pandemic or promise merely to distract us with seasonal warmth.

The ability to look death in the eye and know it will claim us, too, but also that it does not have the last word, may better equip us to face the challenges of the grim present and to view the future differently.

Andrew McGowan is dean of Berkeley Divinity School at Yale and the author of Ancient Christian Worship.