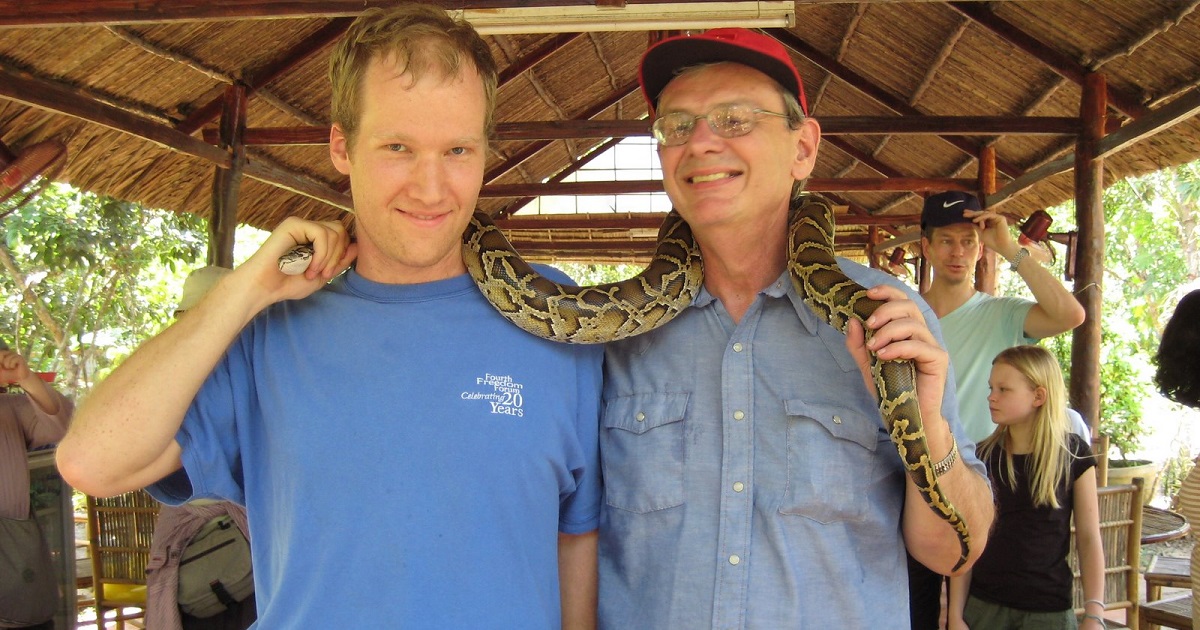 Photo: Tim Nafziger and Dale Suderman in Vietnam in 2008 prior to Dale’s stroke. Photo provided by the author.

My friend Dale Suderman died quietly on Jan. 5 in his recliner in Hillsboro, Kansas. Dale is not the kind of person who is often celebrated by the mainstream Mennonite community for many reasons. Though he grew up Mennonite in Hillsboro, he chose to fight in the Vietnam War. He was a gay man who was involved in leading Mennonite organizations while in the closet. He hung out with radicals, conservatives and sinners and didn’t judge them. He was an alcoholic all his life and always open about his commitment to Alcoholics Anonymous. He was deeply committed to Eucharist at whatever Episcopal church would have him. He actively subverted propriety whenever he could get away with it.

I first met Dale in the fall of 2002 during my senior year at Goshen (Indiana) College when he came to speak at Goshen College Men’s Association (GSMA). I had just experienced my second hospitalization for a major mental health crisis and my world was in fragments. Even so, I was the student assigned to walk Dale around campus between events. We walked down to the dam in the neighborhood west of the college. I told him about what it was like to experience two manic episodes. “Whiskey will really take those over the top,” he said.

I was gobsmacked. On the surface it was a wildly irresponsible thing for him, a trained addictions counselor, to say to me. But he was open about his lifelong journey as an alcoholic in recovery, and his response was a tremendous breath of fresh air that let me know that others had been through what I had been (and far worse) and put their lives back together. His normalization was a critical part of my healing journey at a time when my experiences were far outside normal, acceptable behavior in my small community. He taught me a lot about what sobriety and recovery look like.

Dale grew up in Hillsboro, Kansas, on a farm in a Mennonite and Mennonite Brethren community. His reasons for joining the military were complex and his reasons for going to Vietnam even more so. His plane landed in Saigon just as the Tet offensive was in full swing. He had a desk job, but it was also clear that at that point in the war, everywhere was a front line.

Dale was the person who helped me understand that sometimes I needed “cave time” after I’d been around people. He taught me that there are times to scrimp and save and times to enjoy life. My friendship with him gave me a sense of the vastness of the worldly world, which had a big impact for me as a Mennonite kid with more than a little insularity and world wariness in me (and my roots).

Dale was an edge worker, adapting to change and embracing the blurry lines of a world that peace and justice activists like me preferred to see as all or nothing. He spent his life dancing on the margins of many different communities and weaving relationships with stories and wit. In the 1980s he ran Logos Bookstore in Chicago, a gathering place for all sorts of nerdy misfits, or so I imagine from all the stories I heard about it. He hosted groups from the Urban Life Center where many young Mennonites encountered him during this period.

Dale was an inveterate smoker. I had been raised to disdain smoking by my health-conscious, simple-living Mennonite parents. I didn’t realize the extent of my prejudices toward smokers until I became friends with Dale. I won’t say he completely cured me of my anti-smoking prejudice, but I learned better how to love. His only concession to my snobbery was that we’d sit on the balcony behind his second-floor apartment while he smoked. I listened.

In the spring of 2008, Dale had a massive stroke that would eventually shut down a lot of functions on the right side of his body. In the ensuing years, Dale taught me a lot about grief. I missed my friend deeply even as I sat with him while he struggled to put a complete sentence together. I remember one time he wanted to tell me something so urgently that we spent half an hour with a staff member trying to decipher it. He would stretch for a sentence arc like a brittle rubber band that kept on snapping before he could finish the sentence.

Dale was in the closet about being a gay man most of his life to his home community in Hillsboro. His friend community in Chicago always knew, but he told stories of working in leadership in Mennonite Voluntary Service in the late-1970s and always having a resignation letter ready in his drawer in case he was outed as gay. He finally came out to his home community on Friday, Nov. 9, 2012 at a Tabor College library reception in which he was honored. He had donated his incredible collection of books to the library and invited his circle of friends to be there for his coming out moment. His friends John Kampen and Ben Hartley read reflections on their friendship with Dale that talked about his sexuality while Dale silently listened and nodded. It was a powerful challenge to the blanket of silence on LGBTQ inclusion that still covers the Tabor campus to this day.

When I visited Dale last summer, he told me he was ready to die. He asked me to take a photo of him kneeling in front of a poster that said, “I am the resurrection and the life. The one who believes in me will live, even though they die.” He said, “Tim, that’s me. I’m ready.” I felt some tension with the old cynic I loved and the deeply religious Episcopal man who was sitting in front of me, but I accepted that Dale was defying my expectations, one last time. Goodbye, Dale. Godspeed.

Tim Nafziger is a Mennonite writer and web developer who lives with his wife, Charletta, in the Ventura River watershed on the traditional lands of the Chumash people.