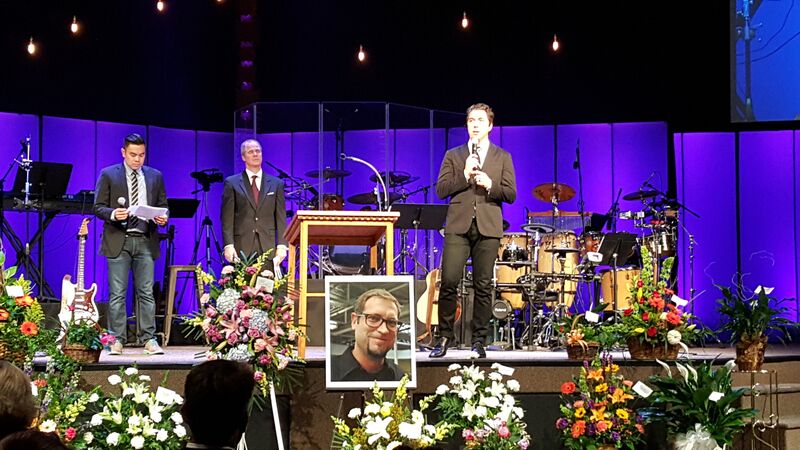 Hal Shrader served as lead pastor at Trinity Mennonite Church in Glendale, Ariz. He was killed in a motorcycle accident on Oct. 19.

A life can’t adequately be captured in a word. But Friday’s [Oct. 30] memorial service for Hal Shrader resounded with the impact of his life on so many. An amazingly large breadth of friends and family, close to 1,000 from a multitude of times and places gathered to remember his influence.

To encounter Hal meant you were going to be affected. He lived intensely, so you were going to be challenged. Stories abounded at the service and over the weekend of the inherent hazards and joys, which was life with Hal. Even the seemingly mundane and trivial became an adventure. From restaurants to mission trips, theological discussions, football, hair styles, music, politics, kitchen gadgets, Greek definitions and grooming, you were going to at least learn something or get pushed from something that he could reference with his iPhone.

To know Hal was to know variety in large and intense doses. Hearing from the friends and family, we heard that his life was like a “Ferrari in 1st gear,” he was “hard to figure out,” “he was not your father’s pastor,” and that “he struggled.” This was illustrated throughout the memorial service, beginning with the breadth of genre and lyrics in the pre-service music. Moving from “Why Me, Lord” to “Because of the Cross” to “Give me Something Good” to “Holy, Holy, Holy Lord,” we were surrounded by the variety and sometimes opposing forces of the lyrics, melodies, and rhythms. This was how Hal’s mind worked and how he lived his life.

Hal was drawn to the words of Jesus in his youth and he was committed to living them. He was dedicated to pursuing peace between enemies. Such a pursuit is risky, full of perils, and can cause intense pain. But Hal took you on the journey with him. It isn’t possible to be engaged in all of that without affecting others.

Through all of it, Hal loved vigorously. You didn’t have to have it together before Hal loved you. He told 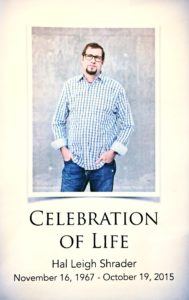 me regularly that he loved me and told me of his appreciation for things I brought to our relationship. But that was Hal. He maintained active relationships with what seems to have been at least 152 best friends. Those from his preschool days, youth group, college, church communities, mosques, and coffee shops can all attest to feeling the influence of his life on theirs.

Friday’s service celebrated Hal’s commitments and how it impacted us all. He would be thrilled to know that he may have been an inspiration for us to impact the world.

A video of Pastor Hal Shrader’s Memorial service can be viewed on the Trinity Mennonite Church website at: http://www.trinitymennonite.com/hal-shrader-info.