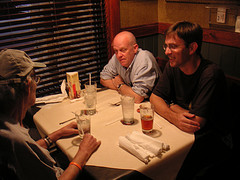 I’ve written twice here before about my journey with my friend Dale through his stroke and recovery. This weekend I, along with three of his other friends, accompanied him back to his home town of Hillsboro, Kansas, where his brothers and sister live. Dale was leaving Chicago, his home for over 30 years. I took my camera along to document this transition in his life.

We left Chicago in a rented RV around noon on Friday after packing up some boxes from his house and checking him out of The Imperials, where he’s been living for 5 months.

We stopped for supper outside St. Louis at a Ruby Tuesdays. Dale was in fine spirits as we had a relaxing meal together. 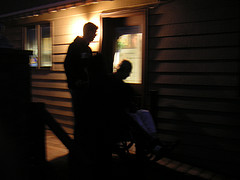 At 6 am the next morning we arrived at Dale’s sister Elva’s house. 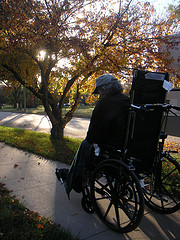 I took this photo of Dale on the sidewalk outside Elva’s house as the sun came up. This is my favorite photo from the day. 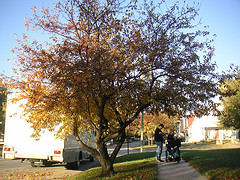 This is the RV that we drove out to Kansas along with the tree that scraped off a vent cap as we pulled into our parking space.

As soon as we started walking down the street with Dale, someone drove by and waved out the window at him. Dale waved back. 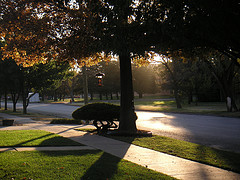 The sun comes through the trees. 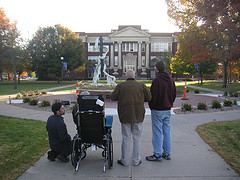 Before heading to the retirement home, we took a tour of Tabor college where Dale went to school. Here Doug, Dan, Dale and Ben survey the administration building. 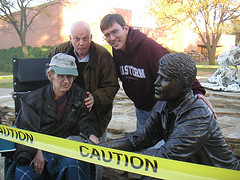 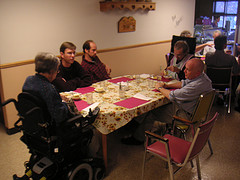 We took Dale to his new place at Parkside Homes. We were really impressed with how friendly and accessible the staff were in comparison with the Imperial. They were very helpful as we decordate Dale’s room with a few pieces of art from his apartment in Chicago. I think Dale will be happy there, especially with all the family living within just a few blocks. 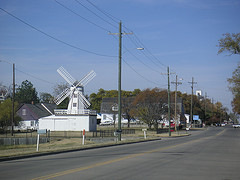 We got a tour of Hillsboro from Elva. This is the windmill that greets people from the Mennonite Museum as you come in 13 mile road. 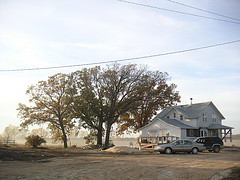 We also got to visit the family farm. This is the house that Dale grew up in. Next to it you can see two oak trees. According to family lore the two oak trees growing right next to each other were planted by Dale’s great grandmother in 1880 when she was a child. Three oaks grew from the three acorns she planted next to each other. The third one in the middle was cut down a few years ago. 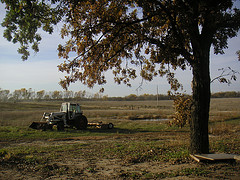 The view from the back yard of the Suderman homestead. 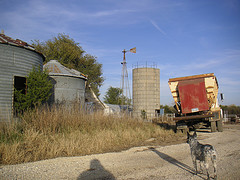 One of the farm dogs followed me around in a remarkably friendly way. 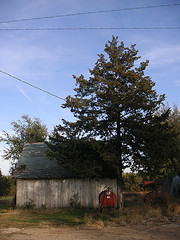 The farm was full of pleasantly rustic buildings glowing in the Kansas as it dipped below the horizon. 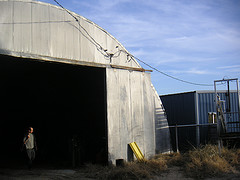 Doug checks out the equipment shed. He was very impressed with the curved wooded rafters.

Ben and Ron, Dale’s brother walk together through the farm.