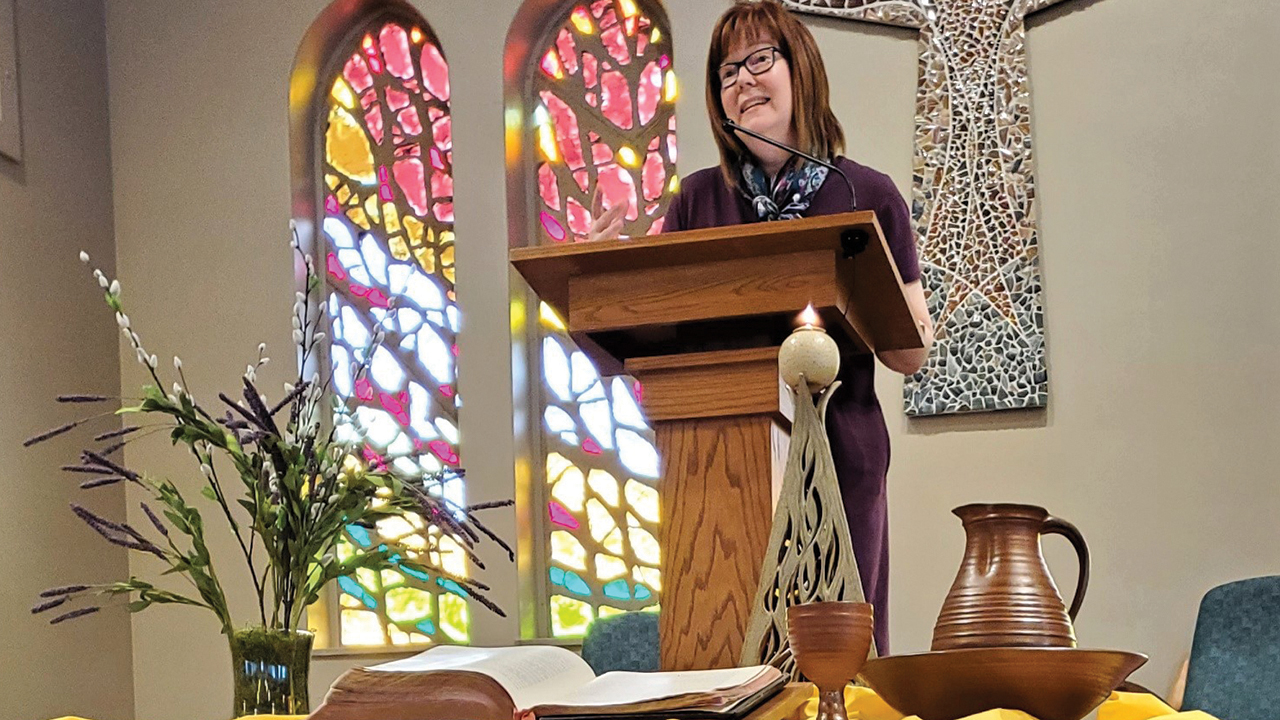 Sue Short is a pastor because her congregation encourages members to use all their gifts and be involved in all facets of worship, regardless of gender.

When Zion Mennonite Church in Archbold, Ohio, conducted its pastoral search process four years ago, she responded to God’s call from within the congregation, though she’d never attended seminary.

Ohio Conference of Mennonite Church USA recently encouraged all of its congregations to consider the leadership of women in all areas of church life and to review whatever barriers may limit women from roles including lead pastor.

“I think it’s important for our kids to grow up seeing a woman in the pulpit,” said Short, who has been part of Zion for many years and remembers there has always been a female pastor on staff since the early 1990s.

While many children might set up dolls and stuffed animals to play school, Short divided her time between pretending to be a teacher and a preacher.

As she grew up, people identified gifts for ministry within her, but she didn’t act on them until that fateful pastoral search. The role wasn’t clearly defined because the church uses a collaborative ministry team model that shares responsibilities.

“I just remember being really excited about this vision,” Short said. “It seems like such a biblical model and something I was interested in for our congregation.”

She felt a burning sensation during congregational meetings and thought about the pastoral role so much she couldn’t sleep — until she made an appointment with a regional conference pastor who said she might be experiencing God’s call.

Short’s experience is the sort of thing Ohio Conference wants to encourage. The conference’s Leadership Development Resource Team conducted a women in ministry survey and reported findings in February. Based on responses from 85 pastors and leaders in 27 of 44 congregations, the team reported formal discussion and discernment regarding women in leadership has taken place in about half of the conference’s churches, anywhere from two to 50 years ago.

The survey found a majority of congregations affirm women in positions of elder or co-pastor roles, but there is still room for growth in full acceptance in lead or solo pastoral positions. Resistance to women being considered for such roles was strongest among men in the survey, usually based on a traditional view of gender roles and interpretation of biblical passages.

The conference’s Leadership Team issued a statement in May affirming women for all pastoral roles, which aligns with the denomination’s Confession of Faith in a Mennonite Perspective. It encourages congregations to review barriers that might exist for female leaders, regularly preach sermons that highlight women in the Bible and provide opportunities for women within and outside the congregation to preach.

“If there is to be tangible change in the numbers of women serving as pastoral leaders, it will require not only the leadership of the conference but also the active participation of congregations,” it said. “. . . When the gifts of all our members, regardless of gender, are affirmed and called forth, we honor Christ Jesus and participate in creating communities that reflect Christ’s reign.”

Assistant conference moderator Paula Snyder Belousek, a member of the Leadership Team, was not surprised by the survey’s results.

“We do not have a huge number of women pastors in the conference, and we definitely want to expand that number,” said Snyder Belousek, who is lead pastor of Salem Mennonite Church in Elida. “This is my 11th year in Ohio Conference, and the numbers have been fairly [steady between] 10 to 15, sometimes less.”

Many Ohio congregations are in rural settings, and Snyder Belousek said it can be intimidating to be the first female pastor in such a community.

“I think it is true across the board that the ideal image of a pastor is a younger guy with a wife and kids,” she said. “But we need to be thinking about other people as ministering people, because there’s just not an abundance of pastors anywhere.”

The Leadership Team’s statement backs that up: “The ongoing shortage of pastoral leaders necessitates that congregations take an active role in developing and calling for the gifts of both women and men to serve our churches.”

While some conferences have challenges finding candidates for openings, MC USA associate executive director for church vitality Michael Danner said full-time positions in a “strong majority” of conferences have many qualified candidates.

“Ohio experiences a shortage of pastoral candidates for many reasons related to the conference culture concerning women, active policy relative to same-sex marriage and instability in their relationship with MC USA,” he said. “. . . South Central and Virginia [conferences] experience similar patterns.”

Danner was concerned the Ohio statement did not offer more theological support for women in ministry, ­because citing a pastoral shortage could be interpreted as suggesting churches might have to “settle” for female pastors.

Snyder Belousek agreed Ohio is one of MC USA’s more conservative conferences. Young pastors don’t necessarily seek out its rural settings. Without a stack of applications from the conference office, it makes sense to build up leaders from within.

Having lived in the Archbold area her whole life, Short said it feels like a good fit to serve at Zion. It helps that the church understands her time is pulled in many directions.

Within months of being affirmed by the congregation, she began taking online classes at Anabaptist Mennonite Biblical Seminary. Unlike the traditional approach of going away for seminary, Short is serving and studying at the same time.

“It’s a lot of work, and it’s hard, but I can immediately put [learning] into practice,” she said.

Like Snyder Belousek, Short hopes the survey’s results point not to divisions but to seeking out leaders from within.

“It’s been really encouraging to see not only the conference but also Mennonite Church USA raising up leaders within congregations,” she said. “I think that’s important and the way we’ll find more pastors in the future.”