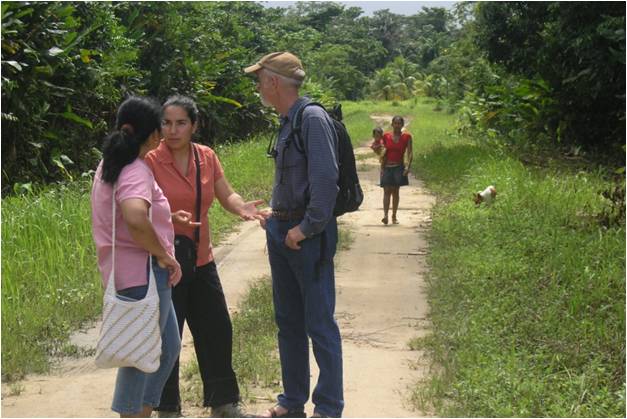 Sarah Augustine is the co-director of Suriname Indigenous Health Fund, a private international charity, and professor of sociology at Heritage University, Toppenish, Washington, where she is also the director of student spirituality. Sarah is also a member of the Mennonite Doctrine of Discovery Coalition.

Photo: Sarah and Dan Peplow in Suriname in 2007.

For the past 12 years, I have represented Indigenous rainforest communities who lose their homes, families and lives each year to the engines of “economic development.” Economic development programs claim to provide the solution to Global Poverty – yet systematically dispossess the most vulnerable peoples.  Resource exploration and extraction target “low population” regions where Indigenous Peoples have lived for thousands of years. Indigenous communities are forced to step aside in the name of progress for all.  As a public health and human rights worker, I work for communities in urgent situations.  At the current moment, I am on a small team representing the Miskito people of Nicaragua who are being driven out of their homes at gun-point by government-sponsored settlers seeking land, gold and timber.  In just the past few months, hundreds have died and many thousand have been displaced – refugees in their own country.

It is my commitment to bring their pleas for justice to the world— because I am a follower of Jesus, I bring their message specifically to people of faith.  I am often met with requests to pause, to wait, to be patient as faith communities wrestle with their own processes.

As an Indigenous woman myself, I have often struggled to respond to this chastisement. I would like to respond in a good way, in a listening way. What follows are some of my thoughts on this reoccurring conversation.

I, too, have witnessed Indigenous colleagues respond to urgency with suspicion. In the Suriname rainforest several years ago, I encountered an academic who was directing a large multi-year grant from an international aid organization. She explained that she had to meet defined benchmarks in order to receive disbursements and voiced frustration that the recipient communities were seemingly unwilling to cooperate with her. Although the objectives of the project were defined by the aid organization in an office in Geneva, the grant director felt they were in the best interest of the community.  She asked my team if we could help her “reach out” to the community, since we had worked together with community colleagues for many years and she could see we had good relationships.

I asked her, “Have you asked the community what their priorities are? Ask them, and then follow their lead.” She replied that was not a grant objective.

I can understand well why my Indigenous colleagues did not feel compelled to comply with this grant director’s urgency. Although she and her project may have been well-intentioned, her primary goal was to complete the grant – not to cooperate with the community in their pursuit of health and human rights.

Where I live, on the homeland of the Yakama Nation, Native friends and neighbors are also sometimes wary of outsiders anxious to pursue projects on the reservation. Short-term aid projects are common here. Often they do not consider the priorities or the work that is already ongoing in the community. Well-intentioned people look to recruit recipients that comply with their church or organization’s objectives – they do not seek to establish long-term relationships based upon respect and partnership. Many times these projects seek to address symptoms of inequality rather than the injustice that creates it, a process that is dehumanizing and often subtly blames recipients of charity while aggrandizing the “helpers.”

I want to distinguish between these examples of urgency and the urgency of Indigenous partners I represent. In the examples I cite, the urgency is generated by parties that are in power. In the first example, the grant director was anxious to accomplish her project, therefore she urgently sought to enlist the participation of Indigenous communities without pausing to consider their priorities or the costs they would incur on her behalf (such as time, energy, effort, contacts, etc.). In the second example, charities are anxious to accomplish short-term projects. Strategic plans, organizational goals, and perhaps funding constituents all compel these charities to urgently take on projects that are achievable and measurable. But the gains are made by those working in the charities themselves. They are not designed to work toward community well-being or justice.

I work for Indigenous communities who face annihilation. In Suriname and French Guyana, the Wayana people are pushed from their homes for mineral wealth in the soil where their ancestors are buried: for timber that provides food, shelter and medicine or for the power that could be harnessed by damming their ancestral rivers, their source of freshwater and protein. Since the Wayana do not have rights under the law in Suriname, there is not even an assimilation plan – just violent displacement.

I have walked with them in confronting their own government, and at their request have taken their

The requests of these communities are urgent. They are calling on those of us with power to stand with them, to advocate for them to the principalities and powers and rulers of darkness in high places.

Two years ago I attended the UN permanent forum on Indigenous Peoples in New York. A woman from Peru stood in the global caucus and spoke on behalf of her women’s delegation.  She spoke about mining, as did many of our sisters from around the world.  She spoke about how mining companies are allowed to come into her country and contaminate her lands, how the military in her country ensures their access, how this process is framed as economic development that will benefit all, and termed “international aid.”

She said, “Our children will not eat for the days we are here with you. We have spent the money for their food on our travel. We are asking you to come to our aid.” Her appeal was urgent.

Nearly three years ago a small band of Miskito leaders of Nicaragua asked my husband and me to help them the way we were attempting to help the Wayana. They explained that we are the only westerners they have heard of who work directly with Indigenous communities. Reluctantly, we agreed, although we felt overtaxed with our work in the Guyana Shield The Miskito, as I said before, are being removed, disappeared and killed simply for inhabiting land their government feels is economically valuable.  For three years, we have received human rights testimony weekly, sometimes many times a week. There are pictures of dead and wounded. There are lists of those who are dead, and disappeared. Many are living in the forest without food, clean water, or medical aid. Their cries are urgent.

I have been told by many faith leaders that my statements are full of hyperbole and manipulative. I ask what words I should use instead.

I am not the only one. At the World Council of Churches General Assembly in 2013, many indigenous delegates were asked to leave the floor for using their allotted two minutes to speak about the death, displacement and war on their lands due to resource extraction. They were accused of trying to distract other delegates from the important business of the church. They were chastised for being out of line and for not sticking to the agenda.

The people I represent—my colleagues, partners and friends—are not people in power. Their urgency comes from the condition of their lives. To ask them to wait based upon a general maxim that Indigenous People don’t respond to urgency is, at the most generous, thoughtless and rude. At worst, it is racism.

Because one group of Indigenous people in a certain context dislike urgency does not give one the right to chastise another Indigenous People who are bound by their own context. The People I represent do not need a lesson in what it means to be Indigenous – they are living that reality in every moment.

Historically the church has often asked for patience when the vulnerable and oppressed have demanded social change. This tendency may be attributed to Indigenous wisdom now, but it is not new.

In Dr. Martin Luther King’s Letter from a Birmingham Jail, he wrote to white Christians who felt his urgency was out of line:

We know through painful experience that freedom is never voluntarily given by the oppressor; it must be demanded by the oppressed. Frankly, I have yet to engage in a direct action campaign that was “well timed” in the view of those who have not suffered unduly from the disease of segregation. For years now I have heard the word “Wait!” It rings in the ear of every Negro with piercing familiarity. This “Wait” has almost always meant “Never.” We must come to see, with one of our distinguished jurists, that “justice too long delayed is justice denied.”

I hope we can continue to hear the truth in these words, and respond with mercy and humility today.