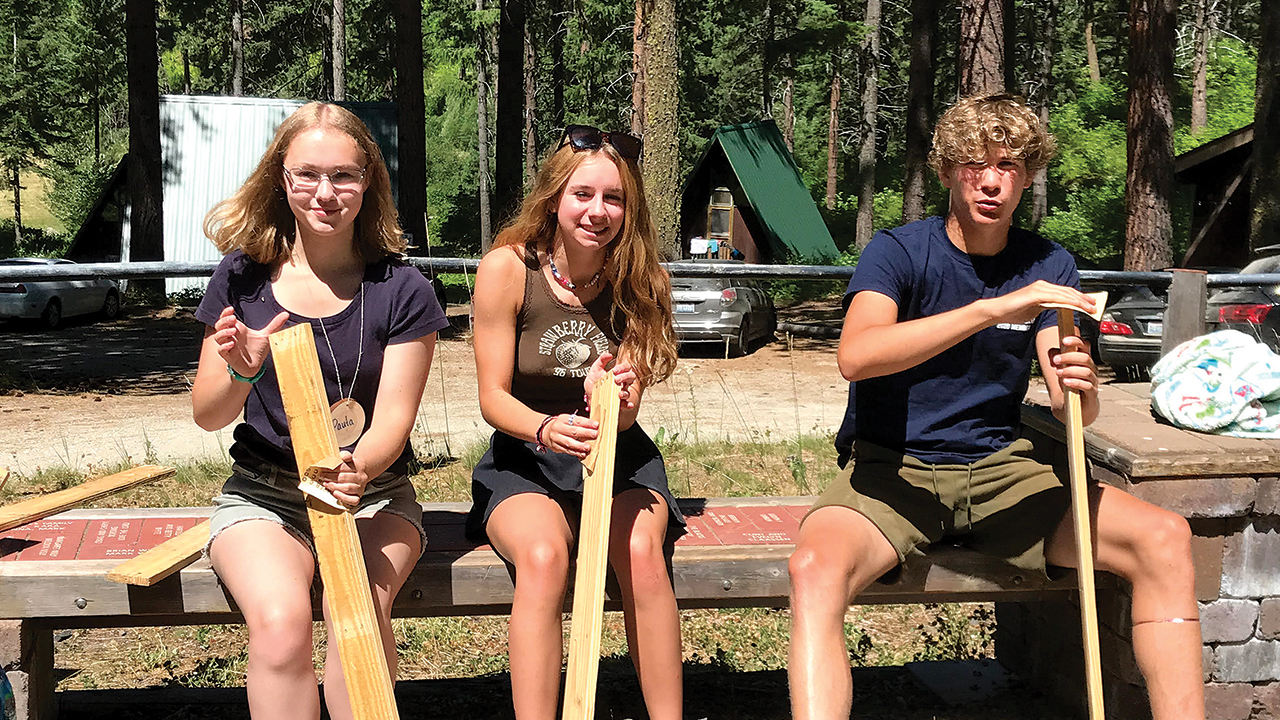 Youth from three Washington Mennonite congregations sand boards that will become a bench during a service project at their convention-themed high school retreat at Camp Camrec. — Amy Epp/Seattle Mennonite Church

As the worship team’s last chords faded in Cincinnati’s convention center, the youth group from Seattle Mennonite Church exited the doors into a forest.

The Mennonite Church USA convention was on a screen. The youth group was in Camp Camrec near Leavenworth, Wash.

Joined by a handful of youth from other Washington congregations, mosquitoes and a flock of wild turkeys, the camp retreat was an attempt to make an event out of attending the convention virtually.

All together, 15 youth groups engaged convention online — most from their church buildings.

Amy Epp, Seattle pastor for discipleship and spiritual formation, said the youth group typically begins convention preparations a year in advance with fundraising and booking airline tickets. But not with a pandemic.

“A year ago, everything was unknown, we just had no idea what to expect,” she said. “It was a parent who suggested we just have a retreat for our youth and do a convention in a retreat space.”

“The music especially was probably a highlight for most of the youth,” she said. “That’s really a part of the experience, having all those thousands of kids, and here it just wasn’t the same.

“They did like the music and more or less sang along and stood up when they were supposed to stand up. As a group of youth, they were game for it.”

At the other end of U.S. time zones in Harrisonburg, Va., the youth group from Park View Mennonite Church gathered at the church in the evenings for worship services and activities with each other. Nurture and faith development pastor Moriah Hurst said that while the approach didn’t fully convey every aspect of connecting to the wider church body at a big convention, that was OK.

“It wasn’t an all-consuming week, but it also wasn’t as exhausting, and for our young people right now as we transition out of COVID isolation, they weren’t ready for going away for a week. This was good for us,” she said. “I grieve what they missed from convention, but this was probably healthier.”

The church hosted games and competitions, including a cupcake bake-off. The best attended night was a service project when everyone volunteered at a local food pantry. Hurst said gathering with each other was a bigger draw than watching an event taking place somewhere else.

“They have spent a year and a half on screens, they’re so sick of it,” she said. “The thing I heard over and over again was ‘People! We got to be with people!’ ”

Caley Ortman also focused on fellowship as youth pastor at First Mennonite Church/Primera Iglesia Menonita in Reedley, Calif. He said the church has been supportive of sending youth to every convention, but fundraising and planning travel during the pandemic was simply too stressful.

Ortman set up furniture to create a living room vibe in a corner of the fellowship hall and invited the youth group to watch worship sessions live at 4 p.m. before sharing a meal to discuss the service.

“I thought we might be just a bunch of kids sitting on couches on their phones and not engaged, but people put their phones away and were attentive,” he said. “They were singing along to worship songs.”

While there were positive experiences as each group made the best of the situation, none was fully satisfied with the virtual approach when compared to previous conventions. They’re all planning to be at the next one in 2023 in Kansas City, Mo.