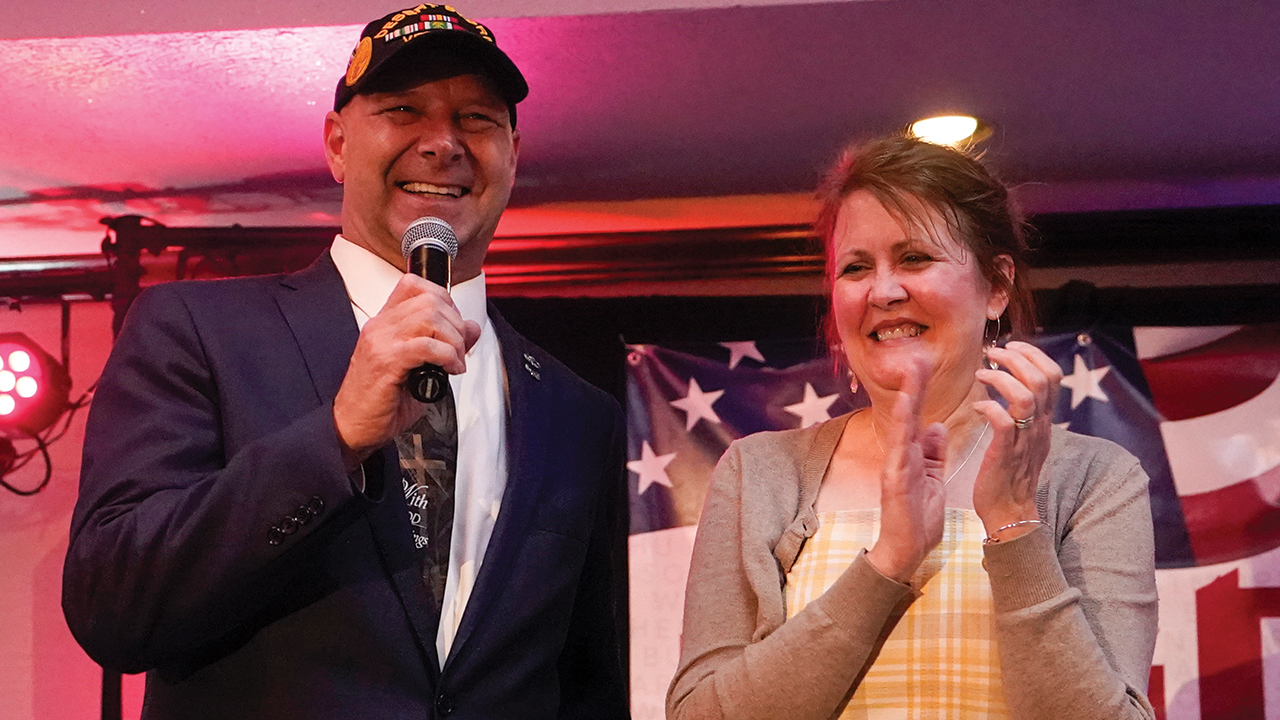 Doug Mastriano, Republican candidate for governor of Pennsylvania, with his wife, Rebecca, on May 17 at a primary night election gathering in Chambersburg. He is wearing a Desert Storm veterans hat, and his tie says, “With God all things are possible.” — Carolyn Kaster/AP

The Republican nominee for gov­ernor of Pennsylvania who has been endorsed by Donald Trump has close connections to a Mennonite church.

Pennsylvania state Sen. Doug Mastriano won the Republican primary May 17 with 44% of the vote. His 2019 entry into politics was fueled by Christian identity and conservative politics. He has supported efforts to overturn the results of the 2020 presidential election, and there is evidence he crossed police barricades during the Jan. 6, 2021, Capitol insurrection.

Mastriano has been described as a proponent of Christian nationalism — the belief that the United States is defined by Christianity and that its laws should prioritize and privilege that faith.

The Philadelphia Inquirer reported Mastriano worships at a Mennonite church. Evidence, although not specific confirmation, points to that congregation being Pond Bank Community Church, a CMC (formerly Conservative Mennonite Church) congregation in Chambersburg.

Pond Bank did not respond to repeated phone calls, emails and other inquiries. It changed its name from Pond Bank Mennonite Church in 2015.

His wife, Rebecca “Rebbie” Mastriano, was the featured speaker for the women’s meeting at the 2019 CMC Pastors’ Conference, hosted by Chambersburg Mennonite Church. (Five months later, Doug Mastriano attended a meeting at that congregation in his role as a Pennsylvania state senator.)

Mastriano’s Pennsylvania state senate web page says “Mastriano is an active member of his church” but does not specify the church.

His 2018 book, Thunder in the Argonne, included “sincere appreciation to my many friends at Pond Bank Community Church and Pastor Jeremy Lehman for their support during this daunting process.” In his state senate role, Mastriano thanked Pond Bank in 2020 for distributing meals during the COVID pandemic.

Mastriano retired from the U.S. Army as a colonel after a 30-year career in which he participated in Operation Desert Storm, directed NATO’s Joint Intelligence Center in Afghanistan and taught at the U.S. Army War College.

He has been endorsed by Trump allies Rudy Giuliani, Michael Flynn, Mike Lindell and Jenna Ellis.

CMC executive director Brian Hershberger told Anabaptist World by email that the conference believes the way of Jesus is extended not by political means, but by gospel preaching, compassionate ministries, reconciliation to God through faith in Christ and the supernatural intervention of God’s spirit.

He did not confirm Mastriano’s church membership and did not respond specifically about Pennsylvania politics or Mastriano.

“The church is distinct from the state in purpose,” he wrote. “We are to follow Jesus in the way of love, peace and nonresistance in relating to all people. We should pray for and respect the state and its officials, and obey in matters not violating obedience to Christ and His Word. The witness of the church to the state is to bring about a greater consciousness of and conscience toward the sovereignty of God, but is not an attempt to bring the state under New Testament ethics for the church.

“Our convictions on these matters have not changed, neither do we intend to do so. Having said that, we acknowledge that people find a home in our churches for various reasons, not always because they share all of our theological convictions.”