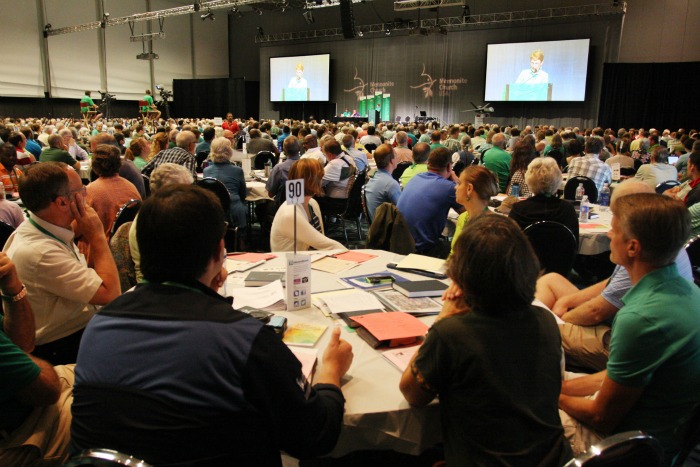 On Aug. 3, in a statement to The Mennonite (and published on the MC USA website Aug. 8), the panel wrote, “We cannot affirm the process that resulted in the selection of D. Stafford for EMU, or any process that does not involve Lauren Shifflett…We are sorry for the ways in which we have been complicit in this, and view it as a missed opportunity. Now we are choosing to support Lauren, victims and survivors over this flawed process.” Read the full statement.

On April 12, Shifflett posted an online account of her experience of abuse by Luke Hartman, former vice president of enrollment at EMU, followed by an April 21 blog written by her sister, Marissa Buck, listing her concerns about the handling of these reports by Lindale and EMU.

The panel suggested two possible organizations—GRACE: Godly Response to Abuse in the Christian Environment and the FaithTrust Institute. According to Anna Groff, chair of the panel and executive director for Dove’s Nest, the panel chose GRACE as its top recommendation, “due to its unique qualifications, its knowledge of issues related to sexual abuse in Christian settings and its dedication to victims/survivors.” GRACE is also named in an Appendix of the Churchwide Statement on Sexual Abuse passed by delegates at the Mennonite Church USA convention in July 2015.

On Aug. 2, EMU announced that the EMU Board of Trustees unanimously approved using DSA. And the next day, the panel ended its participation.

Anna Groff, executive director of Dove’s Nest and chair of the panel, said: “The Panel does not affirm EMU’s process for an investigation with D. Stafford & Associates, primarily due to the fact that the selection process did not involve Lauren Shifflett and that EMU has not agreed in advance to release the full report to the public without interference or editing.”

That “without interference or editing” is one sticking point. From the beginning, said Groff in an Aug. 4 phone interview, “we [the panel] all agreed that the investigative team’s report would be made public.”

EMU’s decision, however, was to show the report to its Board of Trustees first. Kay Nussbaum, EMU board chair, wrote in an Aug. 3 email: “The Board of Trustees has accountability for any independent review or audit including the reporting of results to the public. As an institution of higher education, EMU operates under higher education-specific state and federal rules, restrictions and requirements, including compliance requirements related to employment and safety regulations. As such, EMU’s board, as any higher education governing board, is obligated as part of our fiduciary responsibility to balance transparency with state and federal requirements.”

Nussbaum cited DSA’s experience working with higher education institutions and its expertise in Title IX, Clery Act and other higher-education-specific laws as the primary rationale for its selection. “The group brings a trauma-informed approached to their work and has full-time, multi-disciplinary experts available to complete the inquiry in a timely manner,” she wrote.

On Aug. 4, Shifflett and Buck published a public blog entitled, “#LetSurvivorsLead,” stating that the group that appointed the investigative firm “was made up not of sexual violence survivors, professionals and experts but of representatives of those under investigation for protecting perpetrators and ignoring survivors. This new panel chose a firm that specializes in protecting administrators and institutions. This is the wrong firm chosen by the wrong panel in the wrong process.” The post allowed people to sign, indicating their support for Shifflett. To date, the post has been signed 339 times, including signatures from two members of the Panel on Sexual Abuse Prevention.

In an Aug. 5 email, Buck wrote, “I want the Mennonite community to get the facts about how Luke’s abuse was ignored and covered-up so that we can figure out what needs to change and who needs to be held accountable to prevent it from happening again.”

Buck said that she, Shifflett and Graber were not consulted in the selection process.

In an Aug. 5 phone conversation with Ervin Stutzman, MC USA Executive Director, said they are in conversation with VMC and Lindale about the implications of the panel’s withdrawal for the investigation. “But at this point,” Stutzman said, “we are not ready to announce what direction to take.” At press time, MC USA had not announced a contract with any investigative firm.

In an Aug. 5 interview, Hilary Scarsella, director of Our Stories Untold, said: “We want there to be an investigation conducted by a victim-centered organization qualified to determine who is responsible for enabling the abuse Lauren Shifflett experienced, who is responsible for its cover-up, how the cultures of the institutions involved contributed to her endangerment and harm, and what changes need to be made institutionally in order for the responsible parties to do right by Lauren now and prevent this from happening to anyone else in the future.”

She indicated that the process will fail if it does not earn Shifflett’s trust and—through her—the trust of survivors more broadly. Not only that, Scarsella added, “spending tens of thousands of dollars on an investigation that survivors don’t trust and don’t support is a waste of money.”

When asked if there is a way to go forward, she wrote: “Stop everything. Ask Lauren (through her advocate) what it will take for her to develop trust in this process again. Listen. And then do what she says. It’s really that simple.”

Since the panel’s call for investigation, two new complaints regarding EMU, Lindale and VMC have emerged. On July 29, another former EMU student, identified only as M.G., wrote a blog post on Our Stories Untold detailing an experience of rape during her time at the school, as well as the lack of response she received from school administrators when she reported the rape, and calling for greater institutional transparency and better resources for responding to reports of sexual abuse.

On June 22, seven current and former members of VMC, including Shifflett and Buck, submitted a formal complaint regarding Lindale pastor Duane Yoder’s response to allegations against Hartman. “In several instances Duane Yoder’s actions have hurt and alienated victims and their families–people God’s church should be most concerned to comfort and protect,” said the complaint. Some of these allegations were also outlined in an April 21 blog post by Buck. According to Buck and Shifflett, prior to the complaint, neither of them had been contacted by VMC leadership.

The complainants cited a recently updated VMC policy that addresses pastoral misconduct. The policy was updated and released in April to address pastors who perform same-sex wedding ceremonies. The policy states that when a complaint is received, the conference will conduct an investigation, and, if the breach of trust is confirmed, suspension of credentials is the automatic response.

“I knew of the conference misconduct procedure because it was recently expanded,” wrote Maria Hosler Byler, from Harrisonburg, Va., one of the signers of the complaint. “It applied to the pain Marissa and Lauren expressed and was a way for them and others to access the conference process.…I was calling for the conference to follow [its] procedure.”

In a June 28 email, Patsy Seitz, chair of VMC’s Faith and Life Commission, which deals with credentialing concerns, responded to the complainants, writing: “VMC leadership is committed to the independent process that EMU, VMC and Lindale Mennonite Church have agreed to. Upon completion of that process, if there are any specific recommendations regarding Pastor Duane Yoder, we will proceed with them, keeping your concerns in mind.” In a July 29 statement, VMC Executive Conference Minister Clyde Kratz also wrote that the conference is “committed to full cooperation with the independent review investigation” and “will take seriously the recommendations that emerge from the review.” He wrote that the conference’s hope is “to gain clarity about ways pastors and other congregational leaders respond to allegations of persons employed in church agencies.”

In addition, Lindale’s congregational chair Gloria Lehman noted that the church is planning to cooperate with the ongoing investigation. “A complaint is not a statement of guilt or misconduct,” wrote Lehman in a July 29 email. “It is an allegation that warrants investigation.…Until the findings are in, we will refrain from speculation and continue to walk with all the individuals involved.”

In a July 27 interview, MC USA Denominational Minister Nancy Kauffmann noted that MC USA has a policy in place for how complaints of ministerial misconduct must be investigated. “If all the allegations do not get addressed [in the broader investigation], VMC would have to go and pick up any of the other items that are in that complaint letter and contact the [MC USA] Leadership Development office to begin the procedure laid out in the Ministerial Sexual Misconduct Policy and Procedure document,” said Kauffmann.