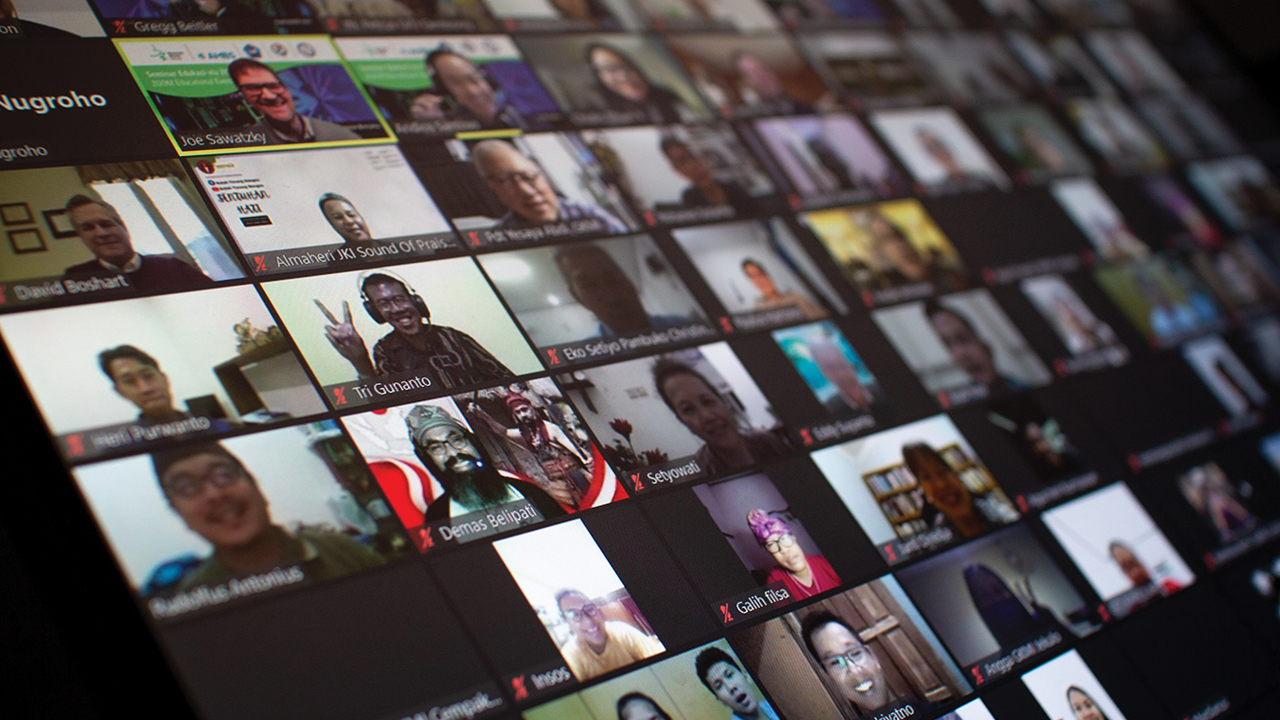 Attendees sign off at the end of the second session of the “From Chaos to Shalom” virtual education series. — Travis Duerksen/MMN

At the end of the first evening of “From Chaos to Shalom: Exploring Peace Theology Together,” emcees ­Andios Santoso and Joe Sawatzky struggled to wrap up the Zoom session. The concluding prayer had been spoken. But none of the nearly 100 attendees wanted to sign off quite yet.

The webinar series, which ran Jan. 25-27, was the first of its kind: a collaboration between Anabaptist Mennonite Biblical Seminary, Mennonite Mission Network, Mennonite World Conference and the three Anabaptist synods in Indonesia.

Each of the webinars featured input from two theologians: one connected to AMBS and another from Indonesia. Each evening offered the chance to examine a specific aspect of peace theology.

Daily themes consisted of peace in the biblical story, peace in Anabaptist history and theology, and peace in Christian-Muslim relations. The final topic was especially relevant for participants from Indonesia, the country with the world’s largest Muslim population.

Chialis Thuan, who translated between English and Indonesian for the webinars, was amazed at the turnout. She and her husband, Santoso, are from Indonesia and living in Elkhart, Ind., while Santoso is studying at AMBS.

The desire for fellowship and connection between Anabaptist leaders in the Southeast Asian archipelago has felt especially vital since the onset of the pandemic.

Joe Sawatzky, the liaison for a partnership between AMBS and MMN, said the idea came out of a desire to connect Indonesian Anabaptists with their North American counterparts. AMBS and MWC, which share a desire to strengthen the Anabaptist theological identity among MWC’s member churches, were natural partners. MMN, which shares in that partnership through AMBS’s Global Anabaptist Education initiative, was also on board.

The plan was to host the event in person in Indonesia, spread over two or three weekends in the months before the MWC assembly in July. Due to rising COVID-19 cases and the emergence of the Omicron variant, the event moved online. This made it easier to attend for those who would have had physical or financial barriers to travel.

“There was so much energy,” Thuan said. “The pastors in Indonesia were thirsty to learn more.”

Thuan saw the webinar series as an opportunity not just for pastors and church leaders in Indonesia to connect with one another but also with the global Anabaptist church.

“[Attendees] felt like they are not just a small congregation in Indonesia, but they have brothers and sisters internationally that they can meet, even though they haven’t met in person,” she said.

AMBS President David Boshart said Anabaptist leaders around the world “have said that the most urgent need is to strengthen the Anabaptist identity of congregations and pastors.” He believes AMBS and MMN “together can accelerate and deepen our engagement” with MWC members.

Eventually, at the end of the first evening’s session, attendees began to sign off. Santoso and Sawatzky invited everyone back for the next session, “Peace in Anabaptist History and Theology.”

The next evening, Santoso captured a screenshot of the participants, documenting the new chapter of Anabaptist history they are writing together.

“Say, ‘Peace!’ ” said Santoso to the group. Across the multitude of virtual windows, believers from distant places did so in unison.