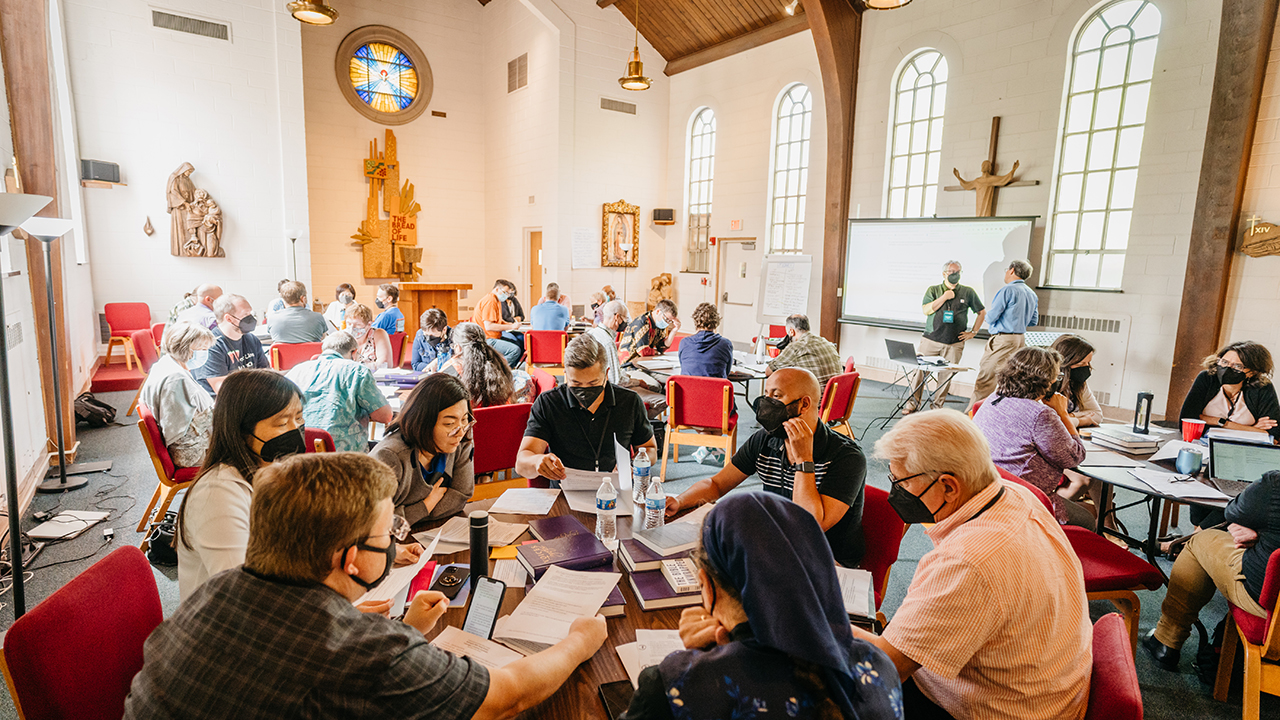 In the chapel at Casa Iskali retreat center in the Chicago suburb of Des Plaines, Ill., 45 people gathered Aug. 26-28 for a working conference to launch the Anabaptist Bible project. — Jace Longenecker/For MennoMedia

Anabaptism began in 1525 in Switzerland when bold young Christians challenged authorities with the radical idea that Scripture spoke clearly to ordinary people who studied the Bible together.

Forty-five people gathered Aug. 26-28 at Casa Iskali retreat center in the Chicago suburb of Des Plaines, Ill., for a working conference to launch the Anabaptist Bible, a project that aims to recapture the populist spirit — and Jesus-centered theology — of 16th-century Anabaptism.

It will be a “people’s Bible” that, if recruiting is successful, will draw on the work of 500 small groups of laypeople who will write marginal notes and commentary.

John D. Roth, a historian and former Goshen College professor who directs the project, admits the plan is daunting in its size and speed: The editors want all content submitted by June 15.

“Gutsy” is how one conference participant, retired filmmaker Elam Stoltzfus of Reading, Pa., described it.

“We’ll pray for wisdom,” he said. “I’m excited about this project. I’m honored to be a part of it.”

A project of MennoMedia, the publishing arm of Mennonite Church USA and Mennonite Church Canada, the Anabaptist Bible aims to reflect the diversity of many groups while drawing the bulk of its support from these two denominations.

The greatest number of people at the meeting were from MC USA. Besides MC Canada, others came from the Church of the Brethren; LMC (formerly Lancaster Mennonite Conference); Evana, an evangelical Anabaptist body; and the Bruderhof, a Plain communal group.

Organizers hope the project will grow to include the Mennonite Brethren, Brethren in Christ and others.

“Our commitment is to the diversity of Anabaptists in North America, which is already a tremendous challenge,” Roth said.

While seeking diverse voices, the Anabaptist Bible will center on a unifying theme: Christ-centered biblical interpretation. Or, in scholarly terms, a “Christocentric hermeneutic.”

Reading Scripture through a Jesus lens, Good said, is not only the Anabaptist way but reflects the theology of the early church.

“The goal of Scripture, according to the early Christians, is to lead people to an encounter with the living Christ,” she said. “We are connected to this living person who is present. If we have a person we are being drawn toward, that becomes our anchor point, and we have space for conversation around it.”

Good said Jesus is the principle by which biblical differences are mediated and “the logic of Scripture’s narrative arc.”

She cited John 1:1, which says Jesus is the original Word, the logic behind creation; Hebrews 1:1-3, which says God spoke to us through a Son who is “the exact imprint of God’s very being”; and Colossians 1:19, which says “all the fullness of God was pleased to dwell” in Jesus.

“Jesus is not the softer side of God that gets averaged” with the God of judgment and wrath, Good said. Jesus is the fullness of God, the authoritative interpreter of Scripture.

With this Christ-centered theology in mind, 500 study groups will get a “3-4-5” assignment: read three passages of Scripture (the entire Bible will be divided into 500 sets of three passages and assignments given), meet four times and respond to five discussion prompts:

— What does the verse or passage suggest about God?

— What might/does Jesus say about it?

— What does the verse or passage suggest about humans — our possibilities and mistakes?

— How are we called to live differently because of this verse or passage?

— What additional questions or comments remain with you
(or your group)?

In the spirit of a people’s Bible accessible to readers from diverse backgrounds, the Anabaptist Bible will use the Common English Bible translation. The CEB uses simpler language than the New International and New Revised Standard versions. It has become popular with immigrants and is easy to read aloud. Since few Anabaptists own a CEB, reading a new translation might stimulate interest.

Study groups that sign up to participate can use any version of the Bible they choose.

Conference participants, some with an academic background in biblical scholarship, advised the project organizers — led by Roth and Mollee Moua, managing editor of Anabaptism at 500 — on matters of theology as they finalize introductory materials for study groups.

Some cautioned that guiding the groups to interpret the Old Testament through a “Jesus lens” must not promote supersessionism. Also known as replacement theology, supersessionism holds that Christians have replaced Jews as God’s people, and it often aligns with antisemitism.

What the study groups might say about sexuality was cited as a potential problem. Emmy Maendel of Maple Ridge Bruderhof near Kingston, N.Y., who noted that she was the only conference participant from a Plain group, warned about nontraditional views on transgender people and same-sex marriage.

“If that comes into this Bible, there are a lot of people who will never buy it,” she said.

Hyejung Yum of Toronto urged that the Anabaptist Bible reflect the global church and contemporary concerns, even though North Americans will produce it and a celebration of history underlies it.

“When we only talk about the 16th century, we maintain a Eurocentric identity,” she said. “Our global identity is more than European descendants, so we need to intentionally work on including that if we want to move forward to the future.”

Gerald Mast, professor of communication at Bluffton University, affirmed the project and testified that daily Bible reading, through all of Scripture (“I have to read the passages that make me uncomfortable”), made him a more welcoming, enduring and less anxious person.

“I am thrilled to be part of a Bible project that will bring the diversity of the church together with the diversity of the Bible and that will attend to the familiar and the neglected corners of the Bible with the ordinary and gathered communities of the church,” he said. “I’m convinced that this Bible will encourage not just Anabaptists but the whole body of Christ toward a greater endurance and a greater welcome.”