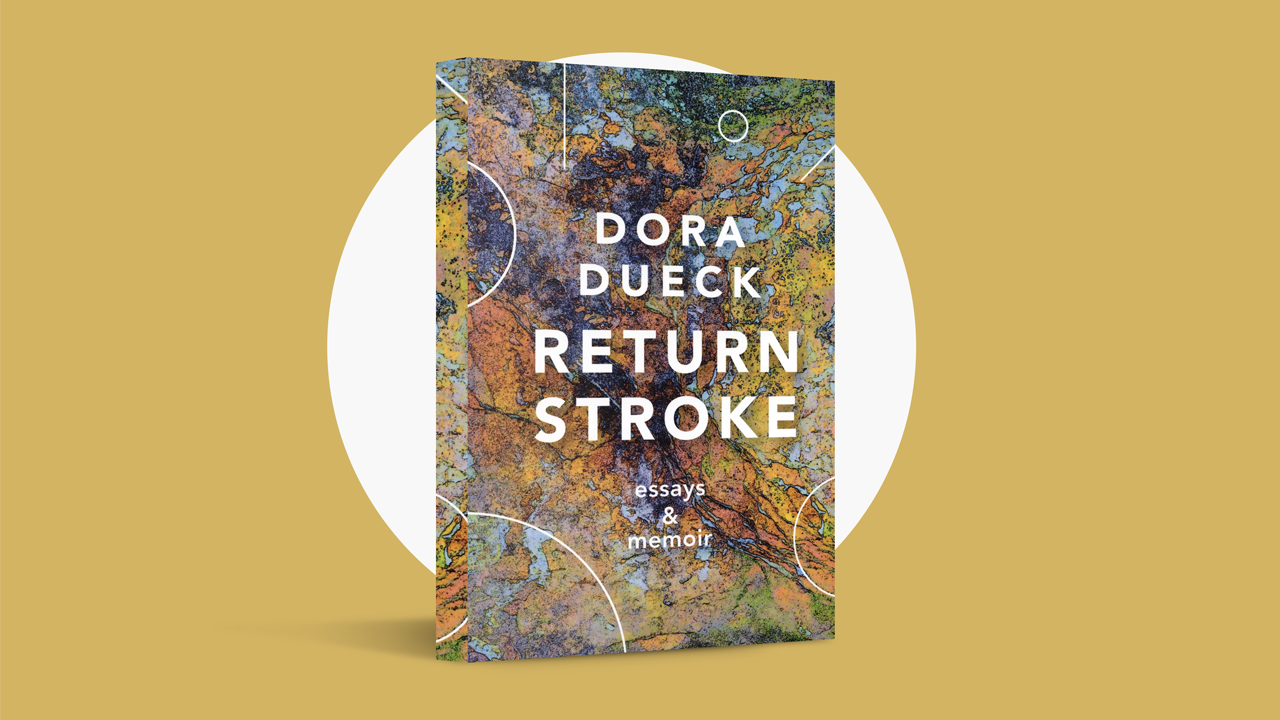 The title of Dora Dueck’s excellent new book, Return Stroke, ostensibly refers to an event in her late father-in-law’s life, when he was 24 and living in Paraguay. Lightning knocked him unconscious and took the life of his mother; both were inside a house when the fatal strike hit, a bolt of electricity so strong it melted the chain in a clock they had brought from Russia. The title essay of Dueck’s collection explores this event within the context of her father-in-law Heinrich’s life, trying to make sense of the tragedy and of a man she never met (he died before she married his son).

In a broader sense, though, Return Stroke suggests the dynamic of “gaining understanding, seeing patterns, facing into the inevitable death, enjoying the playful circularity of then and now,” Dueck writes in her preface. “When I send inquiry into my past, it sends something back to me.” The collection of 10 personal essays and one longer work of memoir is framed around this premise, seeking clarity about what it means to have lived well and what the past can tell us.

Contending with the mystery of old age and death, Return Stroke includes essays on Dueck’s own aging and the death of her husband, Helmut, who succumbed to cancer in 2021. “As He Lay Dying” is an especially moving essay as Dueck invites readers into her husband’s last days.

Dueck’s idea of then and now is highlighted in the juxtaposition of “As He Lay Dying” with the longer work of memoir that follows her personal essays. “In the House of my Pilgrimage” covers the early years of her marriage, when she and Helmut spent several years in Paraguay’s Chaco, the place of Helmut’s birth and, several decades later, the birth of their daughter. In the early 1980s, Helmut accepted a term of service with Mennonite Economic Development Associates, and the young family traveled from Canada to Paraguay.

“In the House of My Pilgrimage” considers in part the story of Mennonite migration following escape from Russia, the decision for some to head straight west to Canada and, for others, south to Paraguay. While her husband worked and she raised her two boys (and gave birth to a third in Paraguay), Dueck began working on a novel, mining archival material from the earliest Mennonite settlements in Paraguay.

This research is threaded through “In the House of My Pilgrimage,” providing ballast for a work at once a history of Mennonites in the region and also a personal reflection of a young family living as white missionaries among Indigenous people. Dueck explores the cultural dissonance of her presence in Paraguay, the loneliness and community she found and the joys and challenges of raising her sons in a place both familiar and not. She explores what it means to find home, thousands of miles from the place of one’s birth — for her in 1983 and for the Russian Mennonites who half a century earlier found themselves in the Chaco’s hot plains.

Dueck raises important questions about the act of writing memoir. The book’s opening essay, “Notes Toward an Autobiography,” tackles the tensions of crafting one’s own story. Dueck considers the enterprise of autobiography by using the metaphor of cooking, noting the difficulty of creating a palatable spread for her guests.

Her work of memoir amplifies these tensions, as Dueck explores the vagaries of memory: how describing the experiences of many decades ago presents particular challenges. She wonders how much of her family’s story she can tell, since their worlds are inextricably tied together with hers. As an outsider, she acknowledges the insufficiency of writing about the Chaco Mennonites and Paraguay’s Indigenous people, given her perspective.

These questions are seamlessly threaded through Dueck’s story, unobtrusive but thrumming beneath the surface. Although better known as a novelist — her 2010 work, This Hidden Thing, was awarded Book of the Year in Manitoba — her sense of storytelling and ability to create compelling scenes make Return Stroke a masterful work of personal history.

Even more, “In the House of My Pilgrimage” complicates the narrative of Mennonite migration and mission work — a reminder of what the writer Chimamanda Ngozi Adichie calls “the dangers of a single story”: the sense that everyone in a people group shares the same story. Return Stroke pushes against this impulse, affirming that our presuppositions about Mennonites — about life and death, about memoir itself — can be challenged by one person’s beautifully unique narrative.