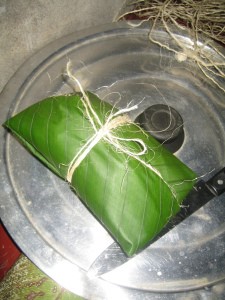 Amy Eanes is a teacher from Harrisonburg, Va. With her husband, Giles, she is currently serving as part of Mennonite Central Committee’s Seed Program with the Mennonite Brethren Church of Chocó, a department on the Pacific coast of Colombia. She is a 2010 graduate of Eastern Mennonite University in Harrisonburg and a member of Community Mennonite Church of Harrisonburg. This post originally appeared on the Anabaptist Witness site and foreshadows the theme of the upcoming journal issue, “Taste and See:Anabaptists, Food, and Mission.”

One amazing aspect of living in Chocó, Colombia through Mennonite Central Committee’s Seed Program is witnessing the community and work ethic among the women of the Mennonite Brethren Church. The hermanas are organized, both within each church and regionally, and they frequently hold events and take leadership in serving their communities. Funding these activities in a context of economic scarcity is more than simply allocating part of the budget as “women’s ministry”—it is a matter of working together and finding creative ways to gain resources. They make lunches to sell after church services, arriving in the basement kitchen at dawn to chop enormous quantities of vegetables and hand squeeze many gallons of orange juice. They sell mazamorra, a corn-based drink, in small plastic cups to passersby outside the church. They also craft one of my favorite Chocoano foods, pasteles, a delicacy similar to tamales but with a rice base instead of corn dough.

In October, I had the privilege of helping make pasteles. The process from beginning to end took about eight hours and approximately seven women were involved at some point or another in the work.

First things first: meet Yineth (pronounced “Jeannette”), on the right in the bright yellow dress. She is a powerhouse of a worker and the former president of the regional ladies’ ministry. Wherever and whenever there is an event, she is there before, during, and after—preparing and planning, encouraging, accomplishing incredible feats like cooking for 300 people over a fire by the side of the river and cleaning up afterwards. She spills over with positive energy and makes you feel lighter and better upon greeting. In her lovingly bossy way, she treats me as a daughter. She also runs a bakery, which is where we made the pasteles.

Here are the steps for preparing pasteles, as extracted from my experience that day:

Step 1: Be ordered to go buy the ingredients. Protest because, well, 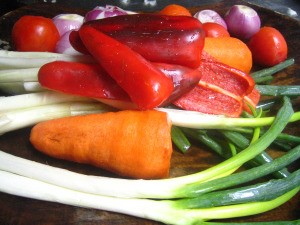 you don’t know what the ingredients are, and secondly because you know you will buy, heaven forbid, the wrong brand of spice packet or something.

Step 2: Go around with the expert and buy the correct ingredients. Forever be recognized and treated better by various vendors around town for having been seen shopping with Yineth.

Step 3: Back at the bakery, prep and clean the vegetables. 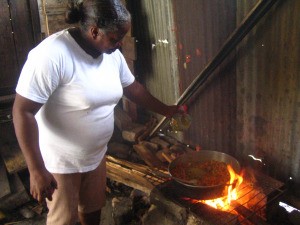 Step 4: Dice the veggies into tiny pieces. There are specific Chocoano ways that they should be chopped, as I’ve learned through trial and error over the past year.

Step 5: Cook the veggies with a variety of spices over the fire. Thus begins the delicious smoky flavor of the pasteles.

Step 6: Remove from heat once tender and replace with marinated chicken and pork. Also put on a massive pot of water to boil.

Step 8: Prepare the guavina (similar to banana) leaves by wiping each one with a damp cloth. Then tear 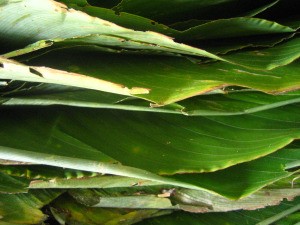 each into two pieces, one larger than the other, by folding, twirling the stem several times and pulling apart with “oomph.”

Step 10: Tuck all that goodness into the leaf, folding securely. Tightly tie the packet with twine.

Step 11: Once all the packets have been assembled, boil in the large pot of water for several hours until the rice is cooked through.

Step 13: Eat and enjoy. You may now die happy. (I neglected to take a picture of our finished pasteles due to our haste in devouring them.)

Accompanying the hermanas of the church in their often labor-intensive efforts has been an education for me. Going down to the basement during a church service to help prepare vegetables or make juice and listening to the women often ministers to my soul in a deeper way than the sermon might, and their passion for multiplying the gifts and resources they possess through service continually inspires me. The food is important, but so is the process: these are dishes meant to be created and eaten with love, time, laughter and many hands.

My prayer covering, and this column’s purpose

How God, the best broker, does business