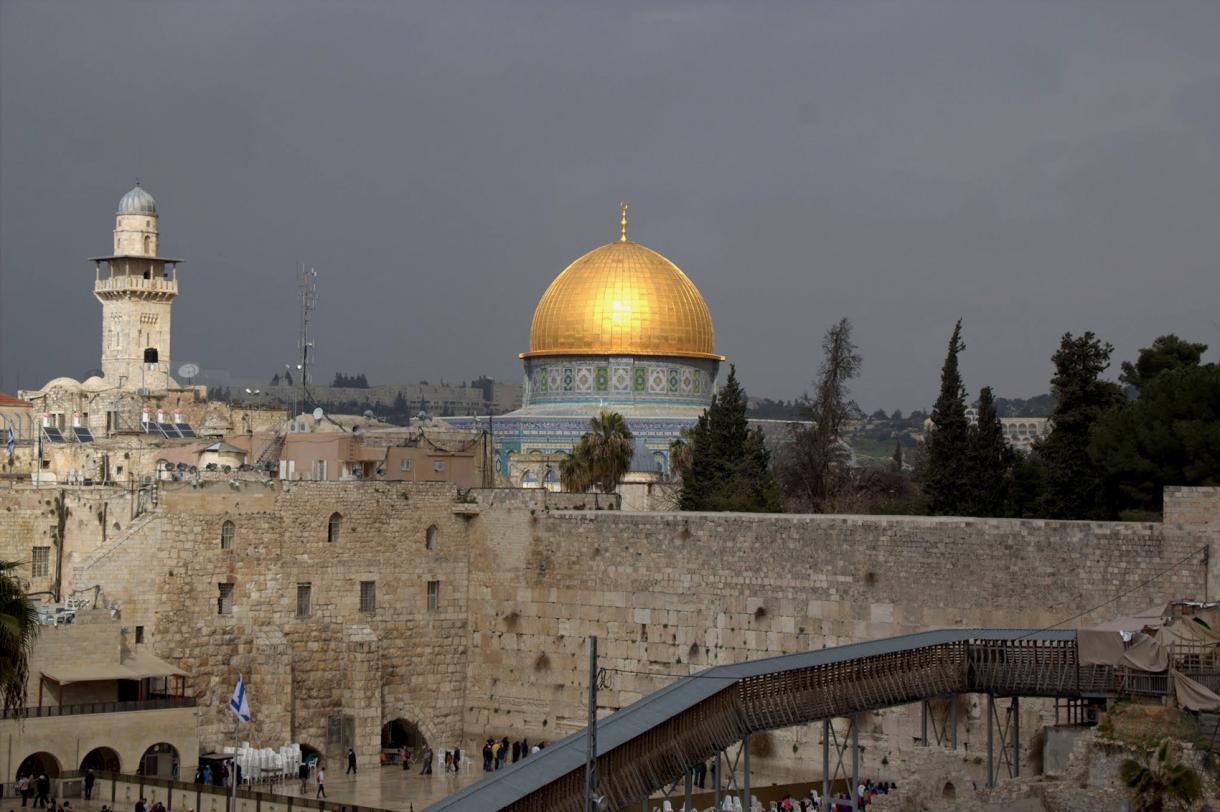 On Dec. 6, U.S. President Donald Trump declared that his administration is recognizing Jerusalem as Israel’s capital and announced plans to move the U.S. embassy from Tel Aviv to Jerusalem in the near future. This move put the Uniged States at odds with many of its international partners—no other country maintains an embassy in Jerusalem.

Hannah Heinzekehr interviewed two Mennonite leaders who have worked alongside partners in the Israel-Palestine region about what this decision means and how Mennonites can respond and learn more. Jonathan Brenneman is the Partners in Peacemaking coordinator for Mennonite Church USA and works with congregations as they seek to live into the “Seeking Peace in Israel-Palestine” resolution that MC USA delegates affirmed last summer. Brenneman’s family also has Christian Palestinian roots. Rachelle Lyndaker Schlabach is the director of Mennonite Central Committee’s Washington office. Her work has focused on U.S. policy toward the Middle East.

When you heard the announcement that the United States would recognize Jerusalem as Israel’s capital, what was your reaction?

Jonathan Brenneman: It was a reminder of how much the U.S. presence and policies have historically worked against peace and continue to do so. The United States is not acting in a way that will help foster any sort of just peace in the region but has now acted in a way that will perpetuate violence and injustice.

Rachelle Lyndaker Schlabach: With this announcement, the United States is really making a unilateral decision on Jerusalem’s status, which is pretty dismaying because it doesn’t contain an acknowledgment of Jerusalem’s significance for Palestinians. If a two-state solution[1] were enacted, it has long been assumed, Israel would have West Jerusalem, and there would be a Palestinian East Jerusalem. With this decision, the United States is taking a stance on a topic that is supposed to be negotiated between Israelis and Palestinians and taking sides with Israelis. It’s signaling to Israelis that their actions are OK, and that’s extremely problematic.

What are you hearing from MCC representatives on the ground in Israel-Palestine about how people are responding to this decision?

RLS: We have four staff in Israel-Palestine: one is Palestinian and three are international staff. I’ve spoken with one [member] of our staff, and he reported that it’s really a day of sadness for Palestinians, both Christians and Muslims. And of course you’ve seen on the news the protests and the people on the streets, and he was reporting that as well. These protests are happening in various towns throughout the West Bank and in Gaza.

How will this decision impact ongoing peace processes in the region?

RLS: To be frank, there really aren’t meaningful peace processes going on right now. The Trump administration has certainly been sending envoys to the region and has said it is interested in facilitating an agreement, but even before this announcement, most analysts were skeptical that those talks would go anywhere. Having said that, if there was a chance that some peace process could begin, this announcement makes that much less likely. In the past with peace processes, the United States has not functioned as an honest broker, and this really takes away any pretense of that. Most Palestinians would see this as the United States losing any credibility.

JB: For the last 30 years, Palestinians have been told the only way they can resist the occupation is through negotiations that are U.S. led and are only between Palestine and Israel. This has meant that nonviolent resistance is not seen as legitimate, economic boycotts are not legitimate and any sort of resistance that is not through direct negotiations with the United States leading the process are not considered legitimate. One of the keys to the negotiations was that Jerusalem would be negotiated in the final rounds of the peace deal. Now the United States has basically taken that off the table and completely sided with Israel, and so, after telling Palestinians this is the only way you can work toward your liberation, this decision is basically making negotiations impossible.

JB: In some ways, this is exactly what the current Israeli administration and those who want to continue the injustice of the occupation want. That Palestinians are put in a dead end situation. The United States is saying it wants to continue negotiations while also making it impossible for negotiations to work and perpetuating a lack of justice in the region. And Trump is doing it to win political points at home with Christians, so as a Christian, it’s especially hard.

There’s one argument that this will perpetuate violence, especially against Israelis, and that Palestinians will respond with violence. There’s a certain amount of truth to that, but there are also a lot of stereotypes about violent Palestinians. I’ve been listening to NPR’s [National Public Radio’s] coverage today, and the first person killed following this decision was a Palestinian the Israeli military killed because the person was protesting in Gaza, a place where there are no Israelis. There were also protests after prayers today, and the Israeli military started arresting nonviolent protesters. Thus far it has been interesting to see how Palestinians are responding in anger, but so far not in violence. The violence has been against them. But we should recognize that this decision makes a very dangerous situation for Palestinians.

Jerusalem is considered a holy city for members of three religious traditions (Christian, Jewish and Muslim). How do these faith associations complicate these conversations? How was this decision driven (or not) by religious concerns in your opinion?

RLS: I could start by saying that MCC, along with many organizations, has long held up the importance of a shared Jerusalem where people from all three faiths are able to worship freely and access to all holy sites is freely available. In terms of how much Turmp’s decision was driven by religious concerns, it’s hard to say for sure. He does seem to be impacted by more evangelical Christians, and I think Vice President Pence is one example of someone who was advocating within the administration for this move. There were also some key American Jewish voices advocating for this, but the vast majority of American Jews are opposed to this move. It’s not as though this broadly represents the American Jewish community. It’s important for us to realize here that we tend to see a lot about this conflict as overlaid with religious overtones, but fundamentally I don’t think it’s a religious conflict. It’s really more about power and control of land. Unfortunately, what you have happening now is that the support of U.S. Christians has actually helped bring about a situation that is deeply damaging to people’s lives on the ground there, including Palestinian Christians who have spoken out about this move.

For members of MC USA who are wanting to live into the Seeking Peace in Israel-Palestine resolution passed this summer, what resources or admonitions from that statement would you highlight as applicable to this particular situation?

JB: First of all, the resolution tries to make clear the difference between the occupied territories[2] and the State of Israel. That’s something that is important to both Jewish and Palestinian people who are working for peace, especially Israeli and Jewish peace activists. What Trump’s decision does is try to further erase that line.

The resolution also calls for Mennonites—especially Mennonites who are U.S. citizens—that we are complicit as Christians and as people this government claims to represent. It’s important for us to challenge those government assumptions. There are ways to let your government officials know you disagree with this decision. There are petitions out there and letter-writing campaigns. Talk to your elected officials and let them know that—as a Christian—you do not agree with Trump’s move.

RLS: Certainly the overall longing for peace, justice and the security of all peoples in the region is as poignant as ever. The resolution gives us a good foundation within MC USA to keep addressing these issues. As one living here in Washington, D.C., It’s important that we as U.S. citizens recognize our own complicity in this. Israel is by far biggest recipient of U.S. military aid. It’s important to tell our officials this is enough and we want all people to have security and equal rights. In many ways, this is just another moment to speak. We’ve been calling on church members for a long time to convey that message.

For people looking to better understand this decision and the ongoing conflict in Israel-Palestine, what additional resources would you point them to?

JB: Alex Awad [a Palestinian Christian and professor at Bethlehem Bible College] wrote a piece on 10 reasons why Christians should oppose Trump’s move of the embassy. Sabeel also pubilshed a beautiful Christmas newsletter that specifically talked about its vision for Jerusalem. There’s also the vision that Palestinian Christians shared in the Kairos document about how they see Jerusalem, going back to the biblical vision of everyone being under their vine and fig tree and turning swords into plowshares. Palestinian Christians have offered us a vision for the importance of Jerusalem as a city of peace and as a city for all peoples. Recognizing how different that vision is from what the president is now doing can be very helpful to see.

RLS: We released a Washington Memo blog post that includes links to two pieces from the region. U.S. Christians need to know what Palestinian Christians are saying about what’s happening. MCC also has a commonly asked questions brochure and a book about Palestine-Israel, if people want to delve in more. There is a page of commonly asked questions that Telos put out. This is a group that works primarily with evangelical Christians. It’s important that American Christians hear different voices and that the voices we hear are rooted in relationships on the ground with people there.

[1] This proposal has been suggested as a solution to the Israeli-Palestinian conflict and calls for the creation of “two states for two groups of people,” an independent State of Palestine alongside the State of Israel. There is still disagreement between Israel and Palestine about the borders of the proposed states.

[2] These territories have long been considered part of the Palestinian state but are currently occupied by Israeli settlers and policed by Israeli forces.

Featured image: The Western Wall and the Dome of the Rock, Jerusalem. MCC photo/Doug Hostetter