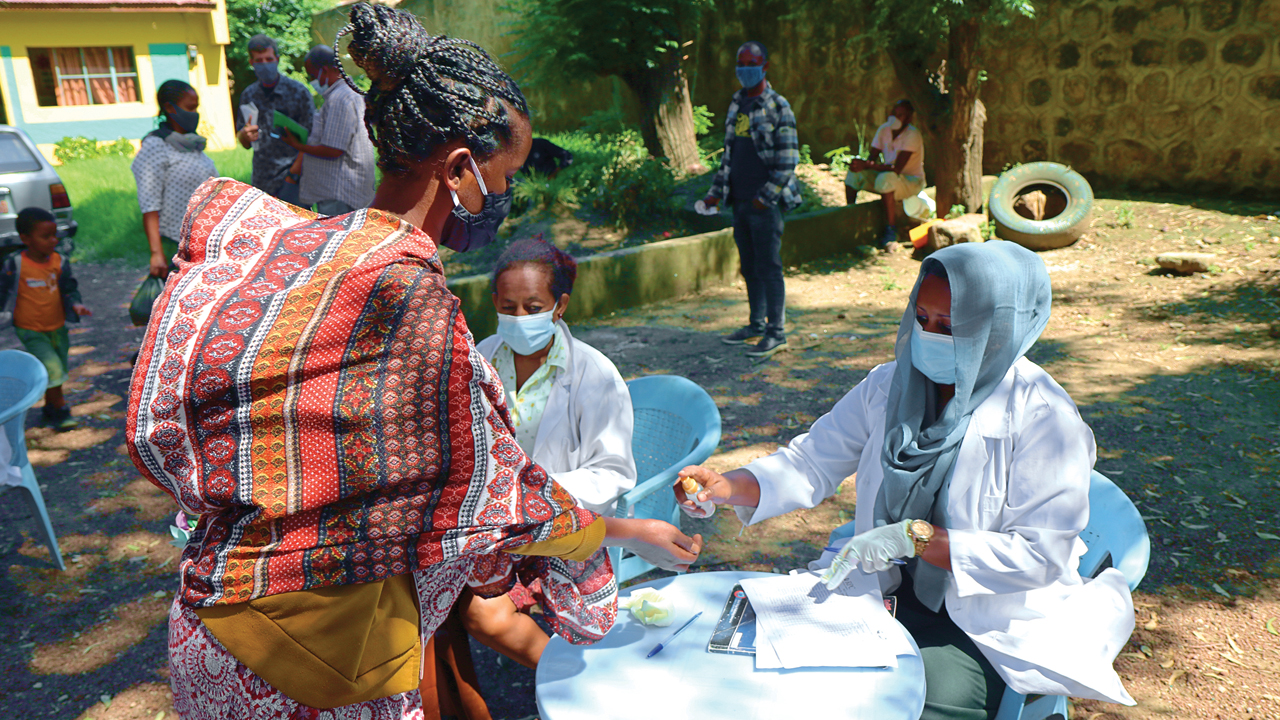 Head teacher Madina Abrahim sprays sanitizer on the hands of Bayish Tababain in early September before she signs in to collect food and soap at Meserete Kristos Church preschool in Adama, Ethiopia. The four-month, MCC-supported project is intended to help combat rising food prices and unemployment caused by the coronavirus pandemic. — Rose Shenk/MCC

One hundred years ago, Mennonite Central Committee’s initial efforts to help people in dire need of food in southern Russia did not go as planned.

Clayton Kratz, Orie O. Miller and Arthur Slagel, the first representatives of MCC, traveled from the United States in the fall of 1920 to deliver food and clothing to people in southern Russia (present-day Ukraine).

The three men were responding to Russian Mennonites’ pleas for help, which led to the creation of “a central committee” to coordinate responses from Mennonites.

After they established a base in Constantinople (present-day Istanbul), Miller and Kratz traveled to Russia and planned a response with church leaders.

While there, they witnessed the devastation and listened to the stories Mennonites told about repeated pillaging by armed groups that had left many families destitute and terrified.

Once Miller returned to Constantinople, he sent Slagel and a $30,000 shipment of food and clothing on a Greek ship to Crimea, a peninsula that was the gateway to southern Russia. Kratz had stayed in Russia, and Miller had rented a warehouse in Crimea and had hired staff to transport the supplies.

But a few weeks after the ship sailed, Miller learned that Russia’s Red Army was in control of southern Russia and Crimea, and no relief supplies could enter safely.

Miller didn’t know where Kratz, Slagel or the shipment were. He had made promises and commitments to people in Russia, but now it seemed there was no way to reach them.

In January 2020, people in Beirut, Lebanon, were struggling. Massive political demonstrations in 2019 revealed the Lebanese people’s dis­satisfaction with their government. Schools closed, and the value of Lebanese currency dropped as inflation rose.

The COVID-19 pandemic made matters worse, causing shops to close, employment opportunities to dry up and health needs to increase. Syrian and Palestinian refugees and Lebanese people who already were living in poverty had even fewer resources than before.

And then, on Aug. 4, an improperly stored supply of ammonium nitrate exploded in the city’s port, causing death, injuries and devastation of property throughout the city. This included the Karantina neighborhood, where many refugees, migrant workers and impoverished Lebanese people live.

“It looks like a war zone,” said Garry Mayhew — an MCC representative with his wife, Kate Mayhew, for Lebanon, Syria and Iraq — after surveying the damage the next day.

Just like 100 years before, MCC had to figure out how to respond to the needs of people in crisis when the way forward wasn’t clear.

Lebanon wasn’t the only place where MCC needed to determine and adapt its response. In countries around the world where MCC works, COVID-19 increased the need for health care and food while MCC and partner organization staff needed to protect their own health.

At the same time, the pandemic affected MCC’s funding sources as donors’ finances were impacted, relief sales were canceled and thrift shops were temporarily closed.

Once again, MCC’s leaders were wondering how they would continue supporting the people they had promised to help.

Although Miller couldn’t get MCC’s supplies into Russia right away, he could help the refugees pouring into Constantinople, Mennonites among them.

Miller added MCC’s support to that of other organizations providing child care and transportation to refugees. He opened a home for Mennonite and Lutheran men, providing them with an English tutor and helping them to apply for visas to get to the U.S.

He was relieved when Slagel returned with the supplies. More volunteers from the U.S. arrived, and Alvin J. Miller took over coordination of MCC’s work in Constantinople in early 1921. MCC continued to help refugees by establishing a hospital, a children’s shelter and a women’s home.

Kratz, however, had been abducted soon after he and Orie Miller parted on the first trip to southern Russia. He is believed to have been killed, but his body was never recovered.

Through persistently working with numerous government officials, MCC was able to get food into southern Russia by Christmas 1921 and continued shipments in 1922. At the peak of its response in March 1922, MCC was providing 25,000 daily food rations to Mennonites and others.

MCC sent tractors and seeds to help farmers get crops in the ground, and the feedings continued until the first harvest of 1923. Contributors gave $2.45 million to support the Russian response.

“It came almost miraculously from faraway America, from friends they had never seen or known, from someone who wished them well,” A.J. Miller is quoted as saying in Feeding the Hungry by P.C. Hiebert and Orie O. Miller. “It was love reaching out its strong hands across the waters and the plains; across oceans and continents.”

MCC continues to share its supporters’ love despite the pandemic.

In Beirut, MCC and its partners have adapted their food-distribution system by setting up appointments, using masks and physical distancing to protect the health of the recipients. Homes and small businesses will be rebuilt, and children are receiving support for their emotional and social health.

Trainings for peacebuilding, health-care and farming techniques have gone virtual, where possible, or take place individually or in outdoor group settings where people can spread apart.

More canned meat was distributed than usual in the U.S. this year to help people who were struggling financially. MCC, along with Mennonite Disaster Service and Everence Financial, also funded grants to Anabaptist churches, often churches of color, that needed help to pay their staff or assist their members.

MCC’s work continued with the support of its constituents who also adapted to COVID-19 by turning relief sales into virtual auctions, creating new fundraisers for families and increasing individual donations.

COVID-19 is making MCC’s work more challenging, as is true for many organizations, with budget and staff position cuts and suspension of new projects. In-person centennial celebrations were canceled or have become virtual, like the national Celebration 2020, which will be livestreamed on Oct. 17.

“Throughout MCC’s 100 years, MCC’s staff and partners have had to be creative and resourceful in spite of challenges they encountered,” said J Ron Byler, MCC U.S. executive director. “This year has been no different, as we and our partners meet people’s needs in the midst of the coronavirus.

“But God has been faithful over all these years, helping us and guiding us as we share God’s love and compassion in the name of Christ in the midst of crisis. And for that we are very thankful.”