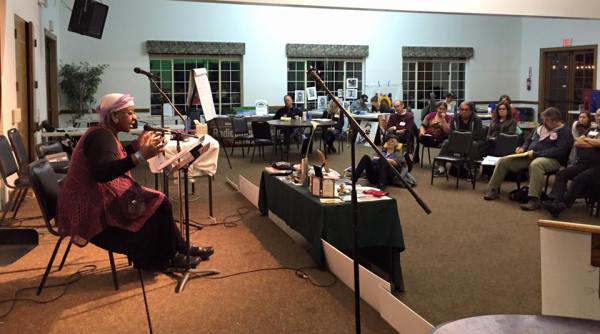 Photo: Last year, at the 2016 Bartimeus Institute, Dr. Catherine Meeks shared about her work organizing a pilgrimage to the site of lynchings around the The Episcopal Diocese of Atlanta. Photo by Tim Nafziger.

After a week and a half of reading a wide variety of articles and social media posts responding to the election of Donald Trump as the next president in the U.S. it is easy to feel like there’s nothing left to say. However, I want to engage with my family of faith: Mennonites stretched across this country and far beyond who are committed to living out Jesus’ call to shalom: peace with justice.

Understanding where we are

As I’ve listened to friends and colleagues, I think one way of understanding the transition we are in is that we have moved to a higher awareness of the structural injustice we have in the U.S. For some of us, this is very scary. For others of us, it might be energizing to realize that now everyone can clearly and unmistakably see the power of white supremacy, patriarchy, ableism and homophobia in our country. At the same time, it’s clear that LGBTQ people, women, immigrants, people of color, and those with high health care needs are likely to bear the brunt of the Trump presidency.

This diagram by English peacemaker and Quaker Adam Curle has been a useful framework for me for understanding many situation of conflict where there is a power imbalance. It can also be used at many different scales, from a conflict within a family to conflict in Mennonite  Church USA to conflict at a national level as I think we are seeing right now.

We can understand this time as moving from quadrant 1 to quadrant 2 as more and more of us become aware of how unbalanced power is.

In some ways, this has been a gradual process over the last two years through the work of movements like Black Lives Matter and the water protectors at Standing Rock. In July, I wrote a post here about this dynamic after a sniper shot the police officers in Dallas. Four months later, I again come back to the quote I used from Dr. Martin Luther King Jr’s Letter from Birmingham Jail in which he used metaphor of a boil. What better image to describe the ugly grassroots hate that Trump has made visible? In the following paragraph, King writes:

“We must use time creatively, in the knowledge that the time is always ripe to do right. Now is the time to make real the promise of democracy and transform our pending national elegy into a creative psalm of brotherhood [and sisterhood]. Now is the time to lift our national policy from the quicksand of racial injustice to the solid rock of human dignity.”

“For 40 years, neoliberals lived in a world of denial and indifference to the suffering of poor and working people and obsessed with the spectacle of success…

As one whose great family and people survived and thrived through slavery, Jim Crow and lynching, Trump’s neofascist rhetoric and predictable authoritarian reign is just another ugly moment that calls forth the best of who we are and what we can do.”

At the same time, I recognize that it is important to not move to quickly through the grief that many of us may feel. My wife, Charletta Erb, does a good job of exploring this further here.

So what do we do now that everyone can see the boil?

In the last week and a half, I’ve found lots of opportunities to connect with people here in my community who are standing up for justice in a wide variety of ways. There is no replacement for this face to face work. We are in a moment when many people are ready to get involved. The key is: how to engage people for the long haul, whether that be in your church or community organization?

Along with local mobilization, reaching out to others face to face to study and plan together is crucial. I want to focus on one opportunity to do that in a few months.

On February 20 to 24, for the fifth year in a row, I will spend four days with scholars, farmers, activists, and pastors from around the U.S. and Canada at the Kinsler Bartimaeus Institute. They all gather in the mountain valley where I live in southern California along the Ventura River for organizing, art, small groups, hiking and preaching rooted in the bedrock of the gospels. Elaine Enns and Ched Myers host the space as part of their work with Bartimaeus Cooperative Ministries (BCM), the community that my wife and I moved here to connect with four and a half years ago.

Scheduled exactly one month into the Trump presidency, the Institute will be an important space to reflect together on what has changed and what has stayed the same and what our work is both together and in the many movements we represent. It is focused, appropriately enough, on Dr. King’s “Beyond Vietnam” sermon, which he delivered exactly one year before he died and written by Dr. Vincent Harding, a Mennonite elder, writer and beloved community organizer.

The most Mennonite conference Mennonites haven’t heard of

The heart and soul of the Bartimaeus Institute are the personal relational network that Ched and Elaine have built up over many years. Ched has spent more than 30 years on the road speaking and organizing in faith communities committed to peace and justice. The two of them stand in the Mennonite and Anabaptist tradition facing outward. The Institute is not an ecumenical conversation for the sake of ecumenism, but is different streams of a movement centered around the work of radical discipleship.

Catholics and evangelicals rub shoulders with people from many mainline denominations brought together by our commitment to the way of Jesus. In a video series I created two and a half years ago, Brent Was, an Episcopal Priest in Jasper, Oregon who works with the unhoused puts it this way: “Maybe [Ched and Elaine’s] greatest gift is the people they are able to bring together at this table.” You can watch more of what Brent has to say here:

Now more than ever, it is crucial to ground our work in the shared vocabulary of Scripture. During the week, Ched leads rousing bible studies that use the socio-political context of the Jesus movement to bring gospel stories alive in new and powerful ways to highlight the way Jesus centered justice and peace in his public acts and parables.

In her blog post the day after the election, Hannah Heinzekehr, listed 10 things we can do to together. None of us can do all of them, but at the Institute you will meet people doing everything on that list and more. It is an intimate gathering of radical practitioners drawn to Anabaptist values, but from many other traditions. The informal slogan of the institute is about being at the intersection of seminary, sanctuary, streets and soil.

I’m a deep believer in the kind of cross-pollination that can come when we learn from each other. I’ve spent my whole adult life since college in cities and towns where Mennonites are a tiny, tiny minority and I deeply believe that this is where we can do the most good and thrive.

Here’s how Stacey Jones, the senior pastor at Urban Jerusalem, a Pentecostal Church in Minneapolis, Minnesota, describes the importance of these varied perspectives:

As Mennonites, we have to learn from other movements within Christianity and outside of it. What stuck out to me during the last Institute here in February was how underrepresented Mennonites were. It could be that California in February is just too warm and sunny for Mennonites. Perhaps it is just too indulgent. But more likely is something a bit more complex: our tendency towards insularity.

I’ve done many interviews with a group of people that Levi Miller refers to as Anabaptist Camp followers (read them here) and again and again I heard their frustration with the lack of welcome they felt. Mennonites who are born into the faith and spend their lives in Goshen/Elkhart, Lancaster, Harrisonburg and Newton often struggle to show interest beyond their boundaries. Provincialism is the downside of being a tight knit community: when your relationship bucket is filled up, you don’t need to go elsewhere.

Another important part of the Institute is its intergenerational nature. What most impressed me about Ched and Elaine when I first got to know them 10 years ago was their commitment to connecting with generations of radical Christians both older and younger than themselves. One night at the institute last February, I sat around a table with a group of people mostly younger than I am and listened to how powerfully they had been impacted by Ched and Elaine’s thoughtful listening, pastoral hearts and nurturing advice. One young man in his early twenties said that he came to BCM prepared to do heady theology work and ended up doing heart work around a history of trauma in his family.

Finally, one of the powerful elements of the Institute is its consistency: year after year you see new people, but also familiar faces. These reconnections are a crucial chance to check-in and realign ourselves like the disciples did after Jesus scattered them and then brought them back together. Hyun and Sue Hur, co-founders of ReconciliAsian, are examples of the handful of other Mennonites who are part of those who return again and again.

The kind of change our system needs doesn’t just happen overnight. It takes decades of training and building our metaphorical muscles. The Kinsler Bartimaeus Institute is just the place to do that. I hope you will join me.