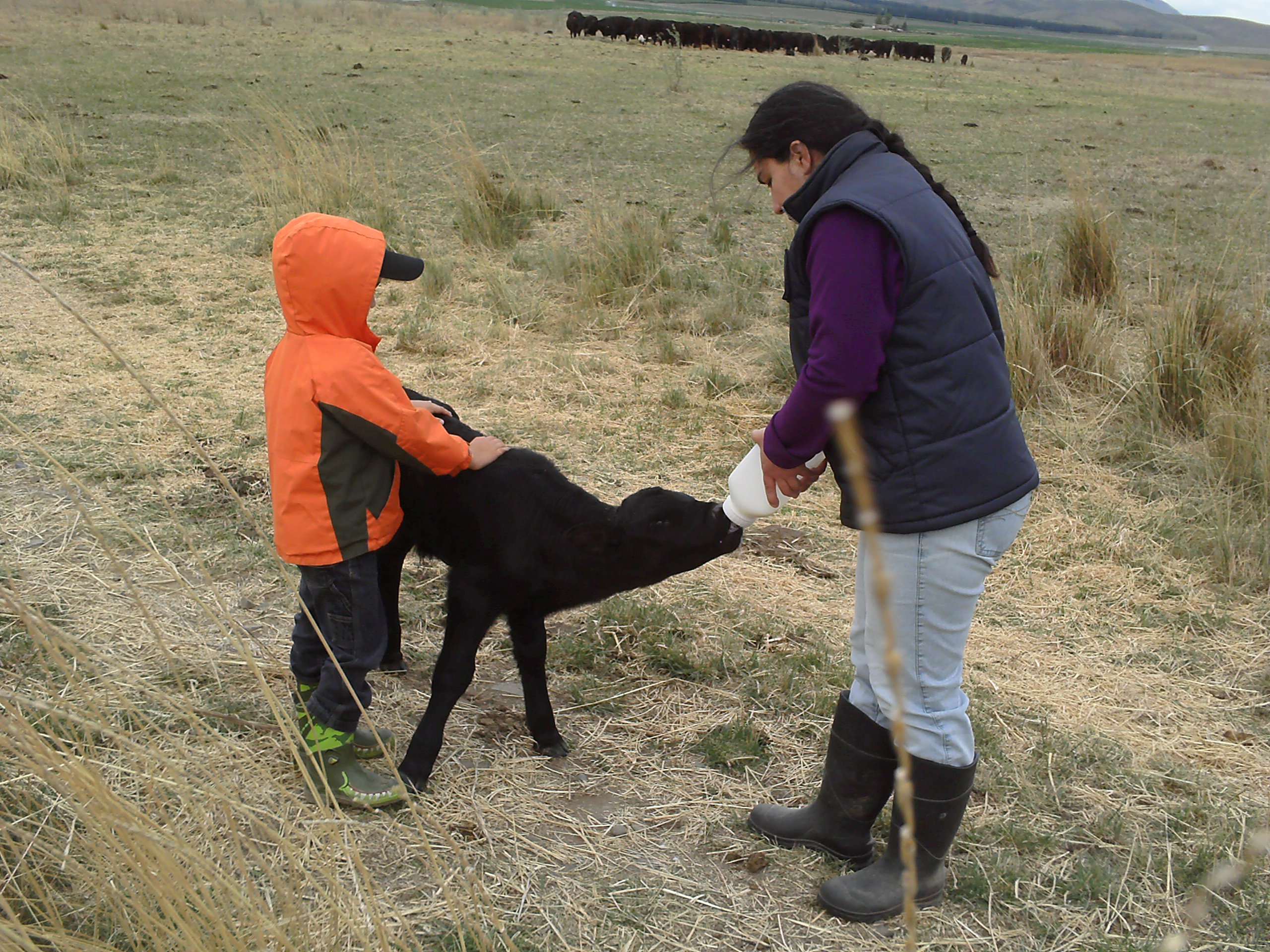 Photo: Sarah Augustine and her son Micah feed a calf. Photo provided by the author.

This article comes from the April issue of The Mennonite, which focuses on “Just Relationships.” Read more reflections online or subscribe to receive more original features in your inbox each month.

Dan, my husband, and I moved to the Yakama reservation in 2006, where we continue to live. The homeland of the confederated bands and tribes of the Yakama Nation drew us in our search for right relationship, or a relationship with balanced power. I believed I could behave in a way that would lead to right relationship. In the 12 years since, I have learned I was wrong. To think I could balance power was simplistic and naive. In a context where the wealth of an entire people is taken, and even the meager means of survival that remain are dominated and controlled, it is impossible to balance power between individual people. For right relationship to be possible, the structures that enforce inequity must be dismantled.

Dan and I co-founded the Suriname Indigenous Health Fund and work as colleagues with Indigenous Peoples in South and Central America who are living with the impact of resource extraction. We wanted to make a home in an Indigenous context here in the United States. I am an Indigenous woman, a Mennonite, married to a white man, mother to a son who can easily pass as white. I grew up in a city far away from my people, because both my parents were orphans who were assimilated as children. Still, I had much to learn about the experience of many Indigenous People in the United States, and moving to a reservation provided a quick instruction. We chose the Yakima Valley because this is where Dan’s Mennonite family homesteaded, having lived on this land in what is now Central Washington for four generations.

The homelands of Indigenous Peoples around the globe share many similarities, and my family wanted to join this experience fully rather than slipping in and out of our work and, by extension, slipping in and out of consciousness about the daily impact of the Doctrine of Discovery (DD) on the peoples it was meant to suppress, then eradicate The DD is the international body of law and policy that defines a reality of injustice and separation for Indigenous Peoples. In most western countries, including the United States, it is incorporated into national laws and policies. The DD makes it possible for resource extraction industries to pollute the lands, waters and bodies of Indigenous Peoples on Indigenous homelands without penalty or censure. The DD makes it possible for the agriculture industry to pollute without penalty or censure the lands, waters and bodies of the Indigenous and vulnerable peoples who dwell on the Yakama reservation.

I met Vanessa (Van) when she and her three younger brothers stopped by soon after we moved into their neighborhood. Our closest neighbors, the family lived in a small home that included Van, four of her younger siblings, her mother and grandmother. During that first visit, the children marveled at the inside of our 1,200-square-foot, modified mobile home, exclaiming, “You have refrigerator” and, “You have doors on your kitchen cabinets” and, “This is the biggest house I’ve ever seen.” They made frequent stops at our home after that. They played in our yard, and we shared produce from our garden, including fresh eggs. Operating an organic ranch, we shared beef at the end of each month, when food was low at Van’s house. We also provided rides from time to time, when a child missed the bus or when gas money was low.

When Van turned 14 a few years after our son was born, I offered her a summer job, and for eight weeks or so she came by a few times each week to hang around the kitchen, help with canning and baking, work in our large garden and play with my son. She saw the cash we earned on weekends from beef sales and kept in a small cashbox, destined for deposit on Monday mornings.

One Monday, Dan discovered that an entire weekend of sales—a large sum—was missing from the cashbox. We immediately went to Van’s home and asked her about it. She admitted she had taken the money and spent it right away. This was more than a small loss for us. Van’s mother and grandmother were angry at Van and embarrassed by what she had done. Since the entire family lived on one small paycheck, it was impossible for them to repay what Van had taken. We explained that our trust had been violated and that re-establishing trust would be difficult, but we would honor our relationship with the family and would not press charges against Van.

The next summer, we tried again. Van came by each day, helping me with chores in the kitchen or the garden. She especially enjoyed helping with the dozens of chickens we hatched and raised that year. During one visit, Van raided the cash box, this time taking a few hundred dollars. Again we went to her grandmother and mother, explaining the loss and confronting the young girl. Again she admitted, with many tears, what she had done. Again the money was already spent, and there was no way to pay it back.

I felt crushed. We had developed a relationship with this family, sharing the produce from our garden and farm. We were there when important members of the family died, helping with food, compassion, childcare. I felt we had done everything right. How could this child violate our trust in this way? I felt betrayed. Didn’t this family understand that we were doing the right thing by even choosing to live in their community?

In the midst of my turmoil, I came to understand this: My family is the beneficiary of a system of laws and policies created to crush a sovereign people. We could not be the “good guys” in this story. The farm where we live was once the original allotment belonging to Van’s family. The land had been bought and sold many times since, land that cannot be owned in the cosmology of its original people. For how can land be owned? It is the same as claiming to own the wind—creation a force so powerful, Yakama leaders laughed when Governor Stevens offered to buy it in 1855.

What is held sacred by the laws of the United States is private property—not creation or even human lives. If we wished to pursue our rights as property owners, we could have had Van incarcerated. We could have jailed the most vulnerable person in this story, a child living in poverty, surrounded by an empire designed to destroy her people. It was when my anger was focused on this child that the irony of the situation became obvious to me. I, an Indigenous woman, a pacifist committing my life to human rights, felt angry enough to consider calling the police to protect my rights by incarcerating a child who did not own a refrigerator. Looking back, I am thankful this insanity was made obvious to me at last.

Even if Van burned our house to the ground, she couldn’t really hurt us; our home insurance would insulate us from financial harm. How could I possibly balance power with some produce or a summer job? This family understood what we could not at first see, that we had already won the right to take everything away—land, privacy, self-determination, dignity, hope. They watched us each day as we drove our one child to private school, piano lessons, karate. Their family almost never had a working vehicle, and walking or hitchhiking was the norm, whether in 100-degree heat in the summer or freezing temperatures in the winter. They saw the abundance of clothes and toys our son had—10 times what they shared altogether. Their birthright, the land we felt entitled to, produced food for our family, food we could choose to share or not, since it belonged to us. Among the Yakama, an item need only be admired to be presented as a gift; generosity is prized above possessions. In the Yakama cosmology, a reasonable person shouldn’t have to ask.

We cannot be the victims in this story. We have only one role—colonist, beneficiary of an unjust system. I realized that the system must be dismantled. No act of charity could right the massive inequity that is lived each day by the original peoples of the land who lost everything when the reservation system was created. I understand differently now the story of independence in South Africa, where Black Africans were finally allowed to vote when the Apartheid system fell. But decades later, South Africa remains one of the most violent countries on earth. Eighty-five percent of the land (food, diamonds, gold, water resources) is still owned and controlled by a tiny white minority. How can freedom be truly felt without land?

The Yakama lost their land—their access to food, shelter, spirituality, family life, culture, even their economy—when Governor Stevens created the reservation, and the Allotment Act took even the reservation land away just 10 years later. With the damming of Celilo Falls on the Columbia River (the source of “clean energy” in Washington state), the heart of the Yakama economy was cut out and replaced with nothing. No access to food, trade or money. No access to transportation. All the wealth taken away. These are not my personal fault. But they are to my personal benefit, if my family has the power and wealth to possess land stolen from the Yakama.

I realized I will be able to engage in right relationship—relationship where power is balanced—when the laws and policies that created this unjust reservation system are dismantled. In order for power to be balanced, I must give up power and convince others to do the same.

My family and I continue to engage in relationship with Van’s family. We share moments of pain, loss, death, as well as celebration and birth. I realize my work is not the work of Van or her family, and it is certainly not their job to validate me. I long for days when my son’s children may form relationships built on a foundation of justice. Until then, I will work to fight laws and policies that prevent us from forming human relationships where each person’s dignity is acknowledged in reality, in the air we breathe and in the law.

Sarah Augustine, a Pueblo (Tewa) woman, lives with her family in White Swan, Washington. She is a member of Seattle Mennonite Church and cochair of the Dismantling the Doctrine of Discovery Coalition.